I’m so excited to show you this amazing waterfall dresser makeover! I showed you the ugly waterfall piece in my recent finds post yesterday. It was a free find, right here in my own neighborhood. This project was one of the quickest turnarounds I've done in a long, long, time--only FOUR days! 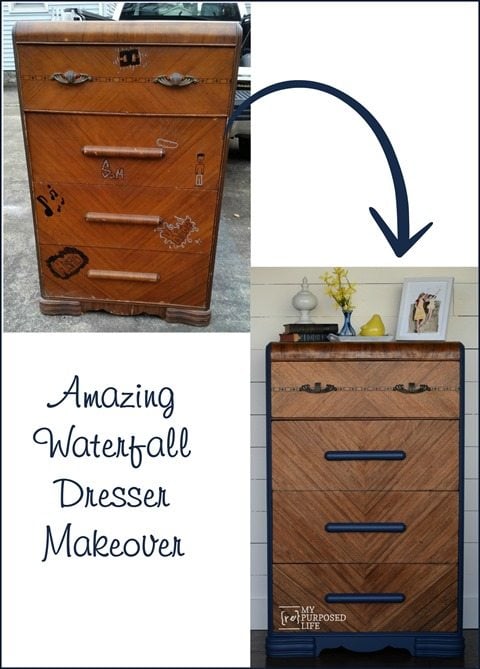 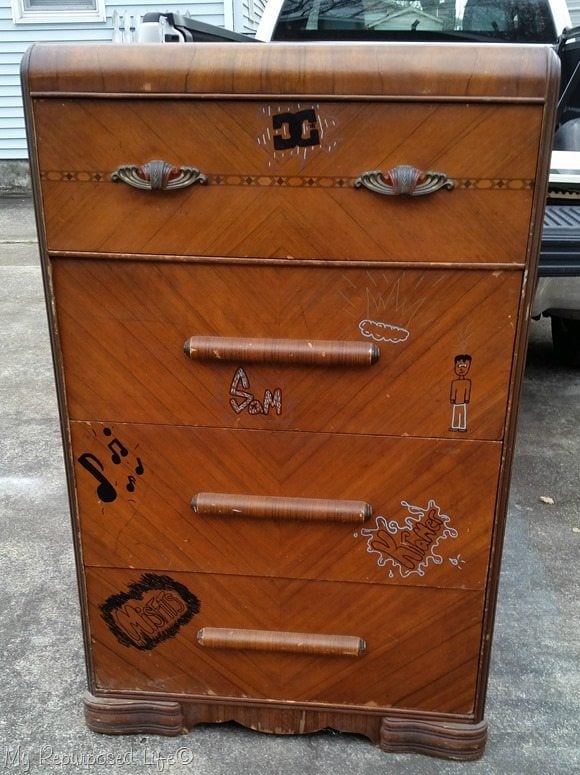 This poor guy was headed to the dumpster, and I got it just in time. I really didn’t want to paint it, but I didn’t know if I would be able to remove all the “beautiful” artwork. The dresser really was in pretty good shape besides the graffiti, and a few veneer issues. Even the drawers work really well.

*Amazon Affiliate Links included in this post for your convenience*

how to remove graffiti from furniture

I don’t usually like stripping furniture, but I thought this might be a relatively easy job since there weren’t a lot of details on the drawers. I used Citristrip and a cheap chip brush to spread it around.

How to strip a waterfall dresser 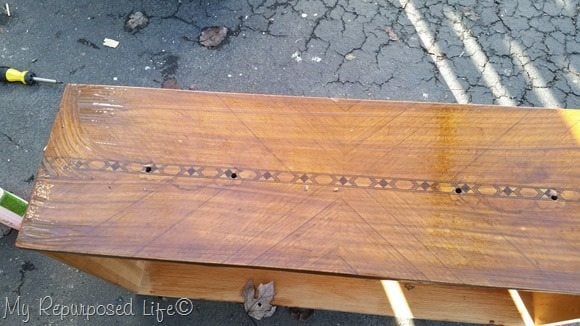 I paid extra attention to the portions of the drawer that had been drawn on with sharpie markers. 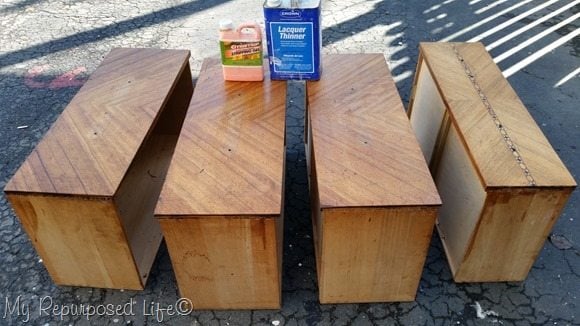 This is how the drawers looked after a coat of Citristrip and then being wiped off with Lacquer Thinner. 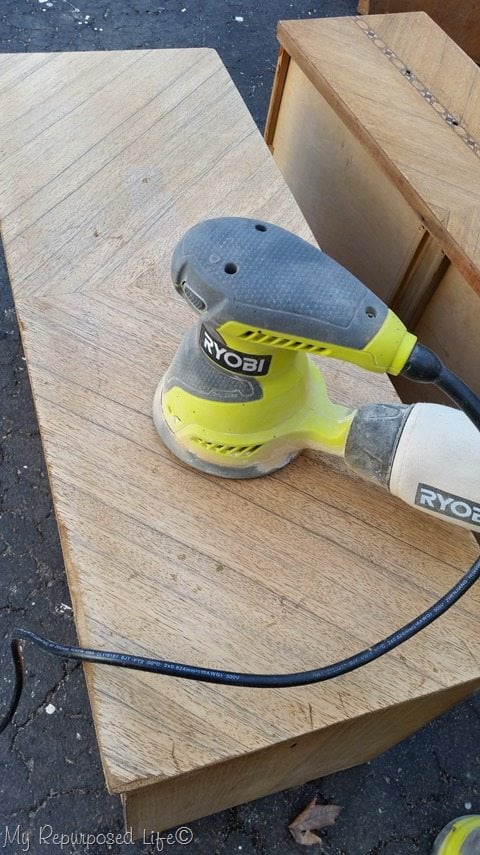 But, that really wasn’t good enough. I had to sand each of the drawers, I probably should have left the Citristrip on longer, or done another application. 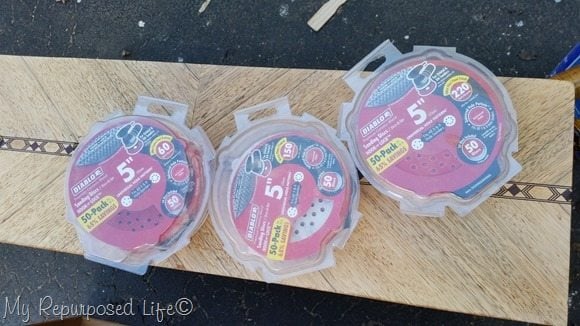 I used 60, 150, then 220 grit sandpaper. Buying these multipacks of sandpaper is a lot more economical if you do a lot of projects. 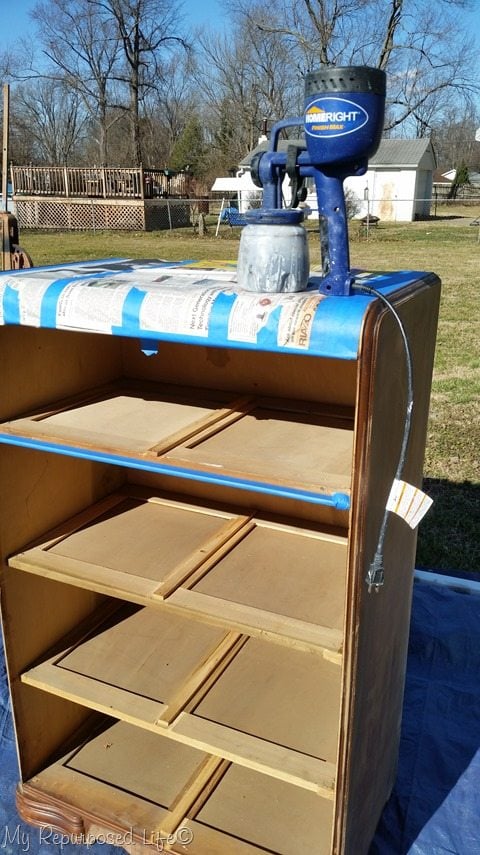 I used some newspaper and painter’s tape to cover the top of the waterfall dresser so I could use my Homeright Finish Max to paint the sides and the bottom front. I used the same blue oops paint that I recently used on my hall table. 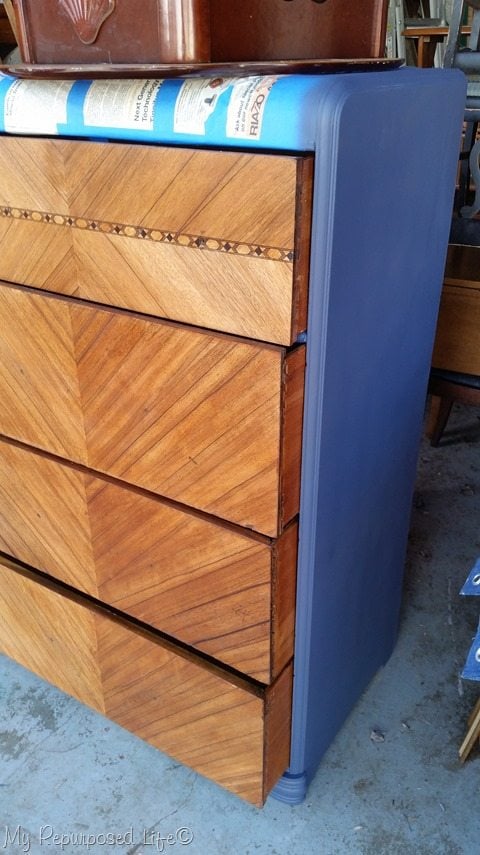 Because this oops paint is a satin sheen, I will be waxing this project. 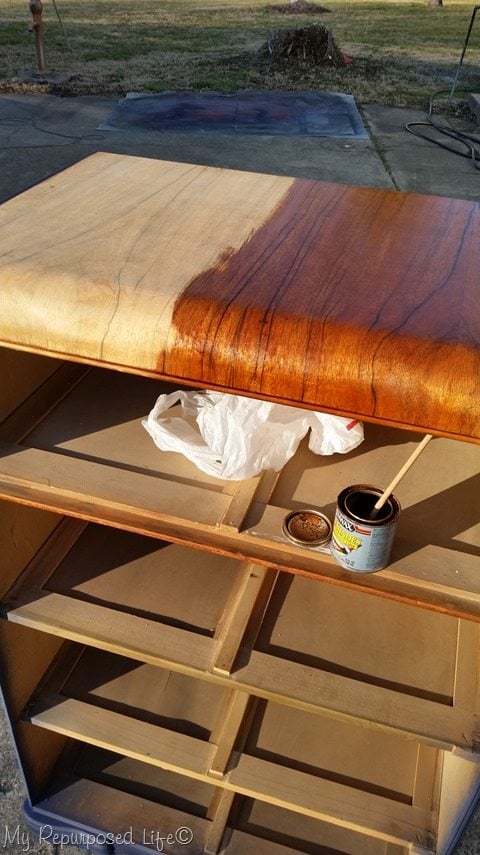 I used some Minwax PolyShades in Dark Walnut for staining the drawers and the top of this waterfall dresser. I applied the stain with a small chip brush. 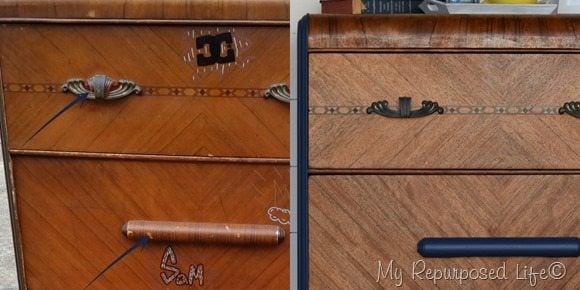 See the BLUE arrows? I had to make some changes to the hardware of the dresser. The metal hardware had some tortoise shell (?) inserts. One of them was broken, and I didn’t think it looked good with the blue paint, so I removed them.

The long wooden drawer pulls were covered with paper. I applied stripper to them without even considering that fact. You can see the BLUE arrow is pointing where some of the paper had been scuffed off. 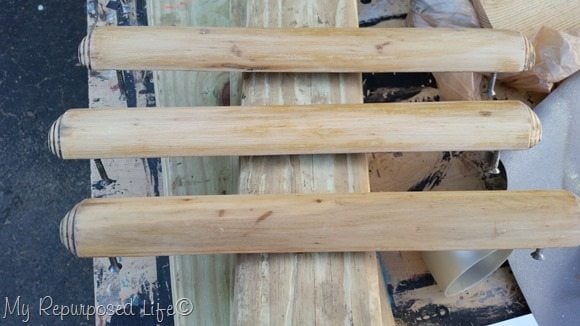 This is how the wooden pulls looked after they were stripped and sanded. I painted them with a few light coats of the chalky paint primer. 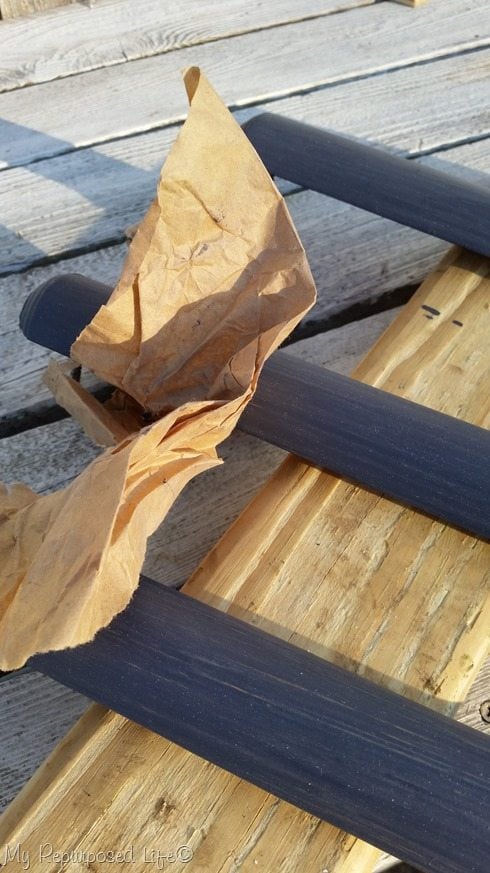 I sanded them in between coats with brown craft paper, the kind that comes in my packages from Amazon. 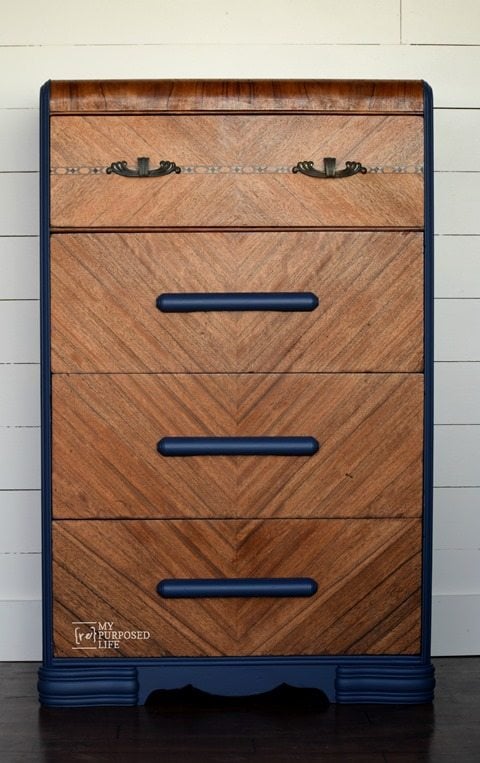 At first I thought I wasn’t going to like the blue wooden drawer pulls, but they are growing on me. 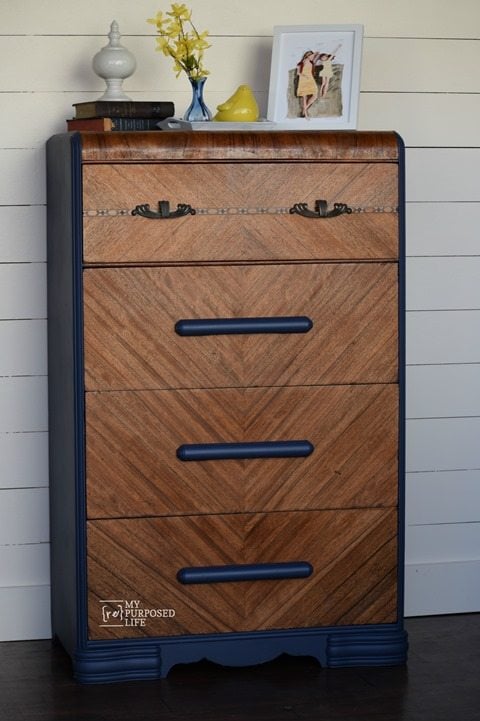 The white finial, and the yellow bird were both Christmas presents from Jamie and Andy. This picture is a good shot of the side of the dresser (which in real life, I refer to as a chest of drawers). 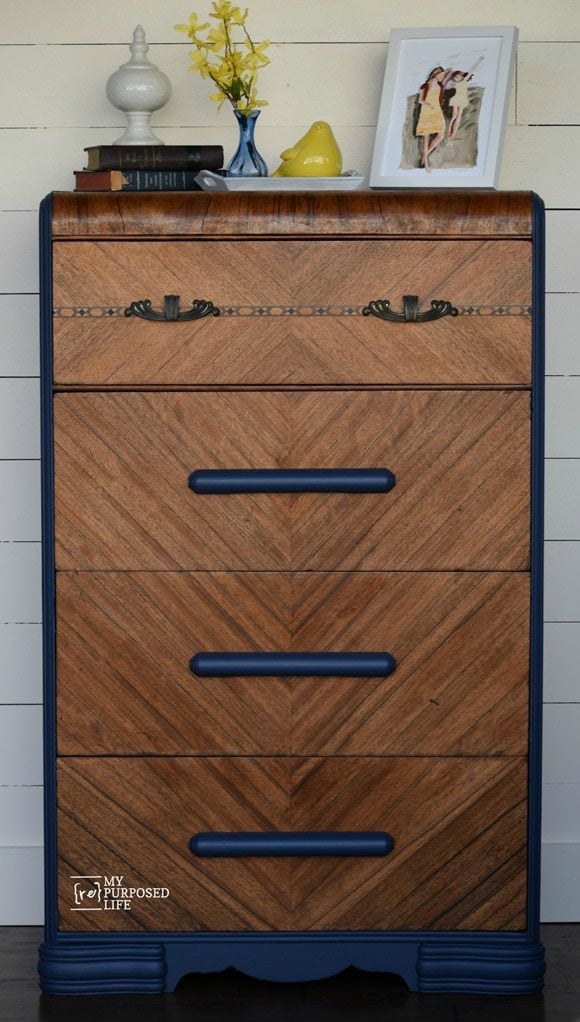 The old guy still has some issues, but he looks a LOT better than he did, don’t you think?

This might be one of my quickest turnarounds in a while. I picked it up last tuesday and finished it on Saturday!

Would you have saved it from the dumpster and drug it home? 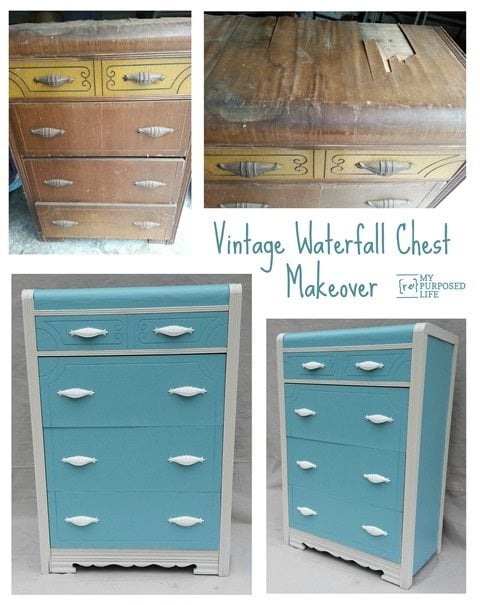 This is another Vintage Waterfall Chest of Drawers  I saved from a fate worse than death!