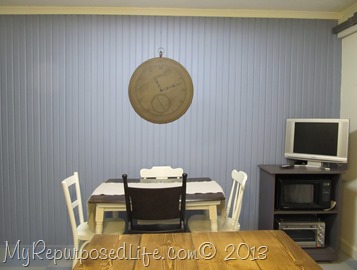 I showed you last week that I used my Command Max paint sprayer to paint this blue wall, but I didn't give any details.
Today, you get details—after I bring you up to date. 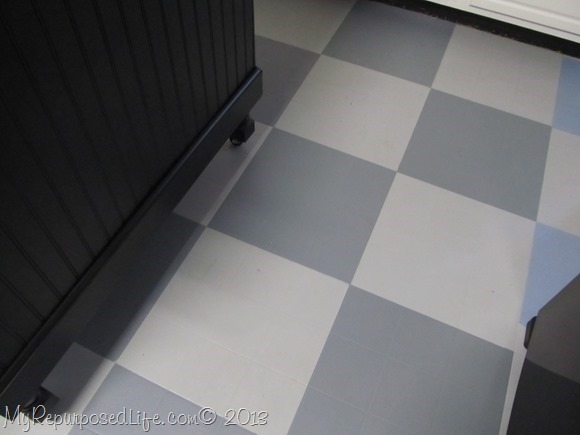 I originally painted my vinyl floor two years ago, you can see one last blue square to the right of the fridge. I painted the blue squares with a darker gray, Honest Abe. The light gray is Empire State. I decided to use the darker gray on the blue wall. 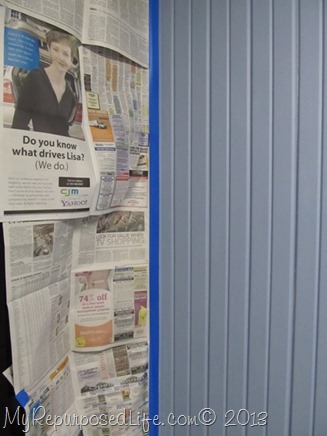 I have never used the CommandMax sprayer indoors. I typically use it for projects. I began by running tape along the left side. After I put the tape on, I added a layer of newspaper with more tape. I like to do it this way to get a clean edge. I held the left side of the newspapers together with tape and staples. 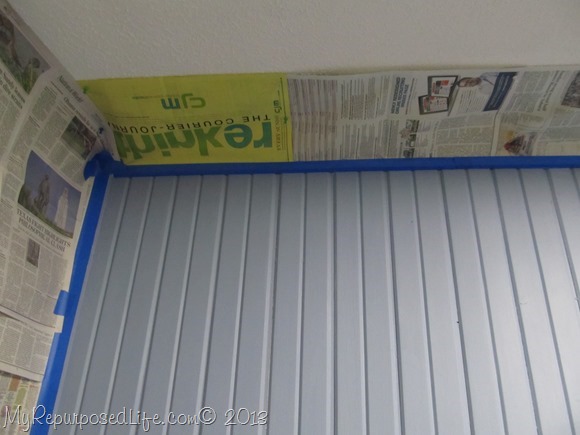 I used the same technique on the ceiling, tape first, followed by another layer of tape and newspapers. I used push pins to hold the outside edge of the newspapers on the ceiling. 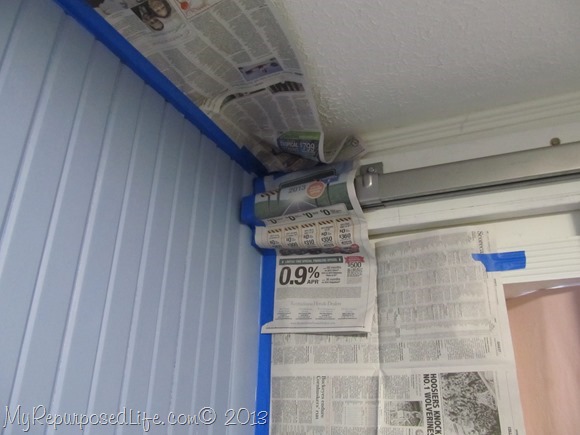 On the right side of the wall I used tape all along the wall, and the door hardware. Then added another layer of newspaper. 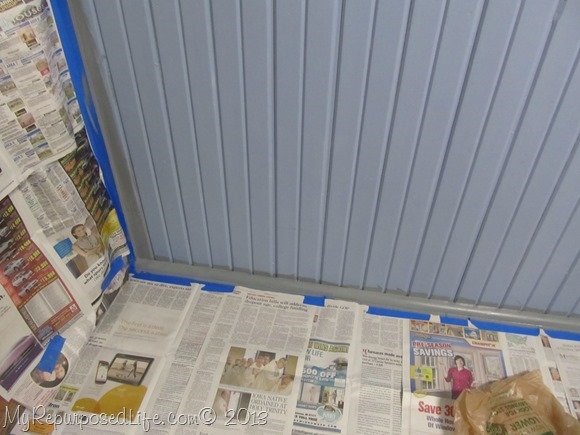 Not to beat a dead horse, but on the floor I used tape all along the floor, then added the newspaper. Here is where I added an extra layer of protection. I put a top layer of newspaper wherever two edges overlapped. When you use a paint sprayer, there is a lot of air. Think about how this newspaper (or whatever covering you use) would be blown around if a fan were blowing on it. Yep, there’s that much air!
You can see in the picture above that I did trim the left side and the floor with a brush. This is mostly because I am impatient. I had loaned my sprayer to my nephew. He had returned it, but had forgotten the mesh strainer I use. While waiting for him to drop it by, I killed time by trimming.
I didn’t take any pictures of preparing my paint sprayer because truthfully I was pretty nervous doing it all indoors. I’m generally pretty messy with it outdoors. 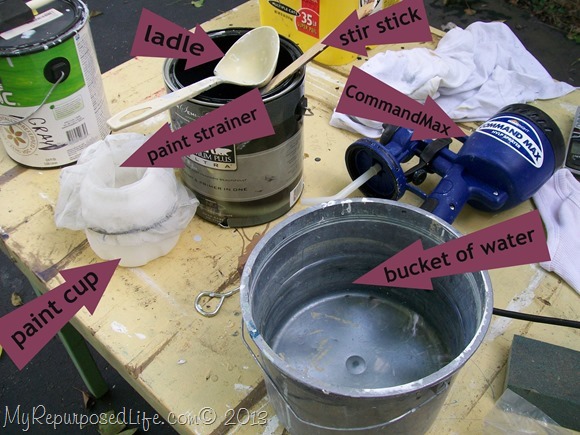 I did what I always do. You can see the tools I always use.(NOT shown in this picture:respirator. Always take care of your lungs when using a paint sprayer)  I stir my paint really well with the paint stick. The ladle makes filling up the paint cup easy. I strain a few ladles of paint into the paint cup, then I add a ladle or two of water. I stirred the paint cup really well to dilute the paint. The Behr paint I used was very thick, and it needed quite a bit of thinning and stirring. After I finish filling up the cup, I immediately put my tools into the bucket of water for ease of cleaning later. I did all of this in the kitchen sink.
Although my paint was relatively new, I still strained it just to make sure nothing would clog up the nozzle in my sprayer. 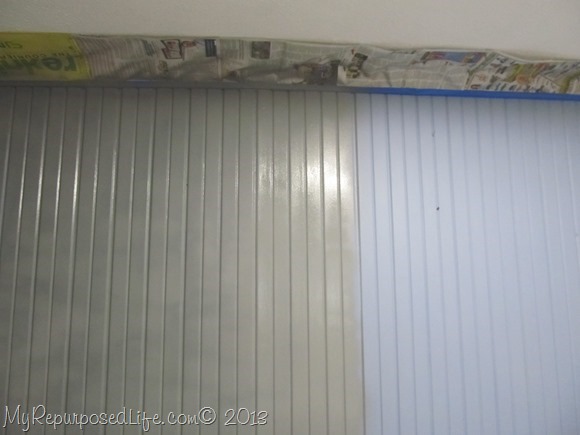 I began on the left side, setting the pattern of the sprayer so that the stream was horizontal. I dialed the knob to let a good amount of paint flow through the nozzle. I slowly moved from top to bottom, then back up again. The flow covered about 2 ½ boards at a time, easily getting into the grooves of the tongue and groove bead board. 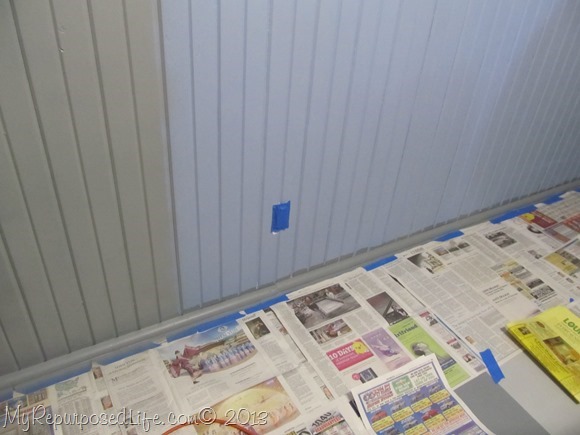 Here you can see I taped up the electrical outlet. 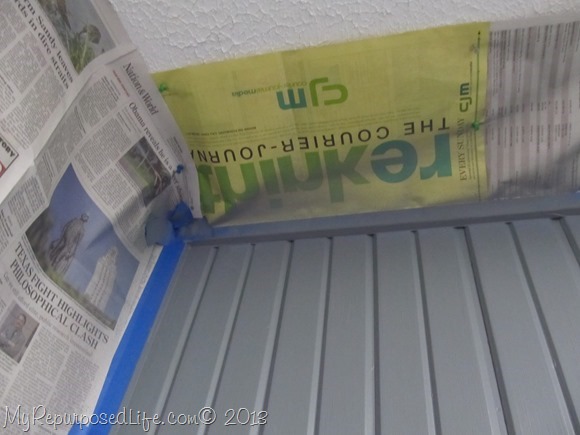 I stood on the floor, and the spray easily reached the top of the wall near the ceiling. When I removed the ceiling newspaper, I could see a slight shadow line where the end of the paper was. I believe had it been a regular ceiling that shadow would have easily wiped off with a damp cloth. Popcorn ceiling? not so much.
If you choose to do this, you might want to pick up that brown paper that comes ready with tape. 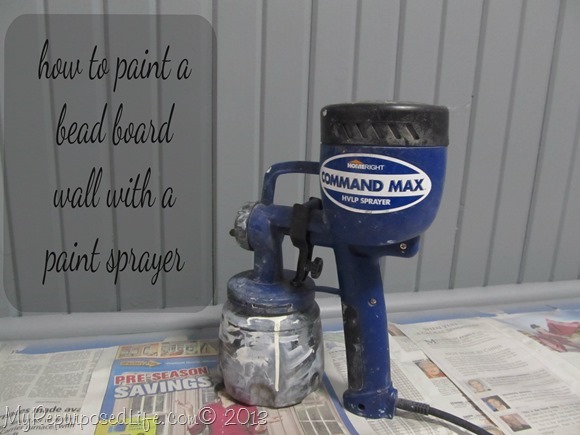 You can see that my CommandMax sprayer is well loved. It proudly wears my favorite colors. 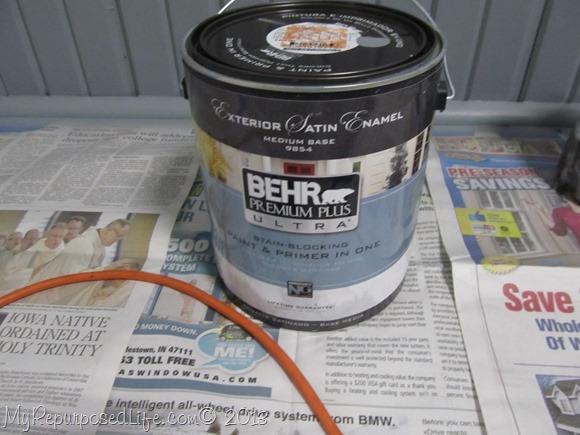 I used Behr paint, my favorite. 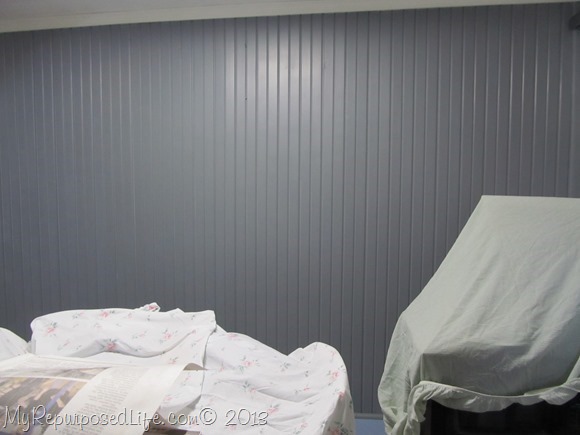 Although there was very little overspray, there was a light cloud of gray dust on all the horizontal surfaces. It really wiped up quite easily with a damp cloth.
For some reason I didn’t feel it was necessary to wear my respirator. I should have, and I highly recommend that while using this sprayer indoors to do it on a day that you can open the windows. Be sure to turn your HVAC unit off. (I did remember to do that)
The coverage was GREAT. I only used one cup of paint, and it only took one coat of paint. The first time I painted this wall a couple of years ago, it took a couple of coats of primer and several coats of paint with a brush and a roller. Using the CommandMax paint sprayer took about 25-30 minutes—well worth the prep time. 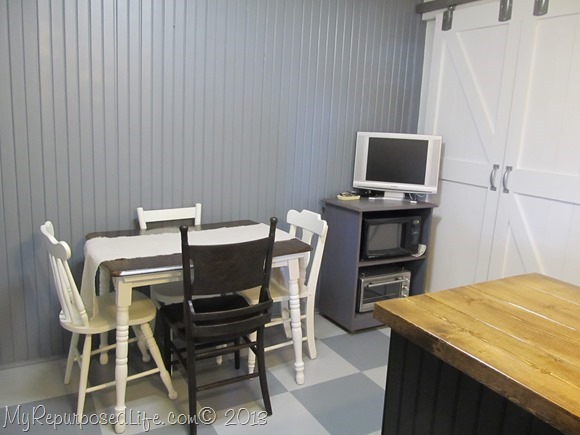 I’m so glad I updated the color. I love the way the gray looks with the white faux barn doors. If you are looking for a great project electric sprayer, I highly recommend  this sprayer.
gail
Pin
Share
Tweet
Share
42Shares
« storage cabinet makeover
easy spring projects »