Recently I was contacted by the Silhouette company and offered the new Cameo to review. I was so excited. If you’re a regular around these parts you KNOW how much I use and LOVE my Silhouette SD. 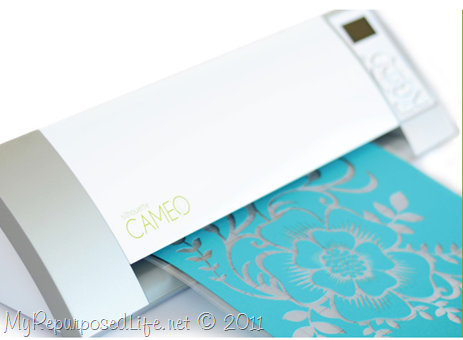 The first thing I noticed about the Cameo is it’s size. It is much larger than the SD, however its  extra size allows you to cut larger media. This is a good thing!
This was my first project with my new Cameo, a DIY vinyl record clock. 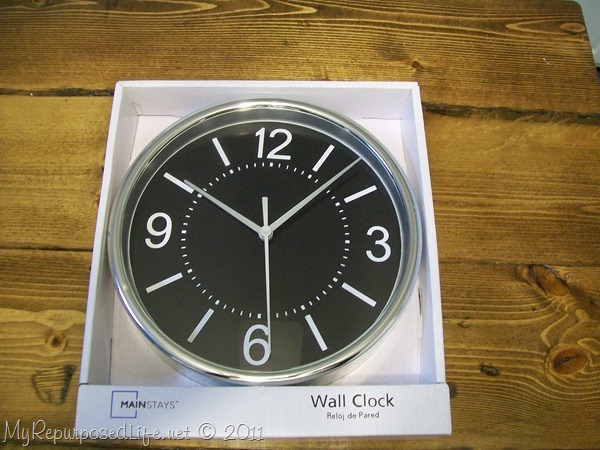 I bought a clock at Wal-mart. This one was $4.97. I proceeded to take it apart. It was very easy, I only needed a small screwdriver. I also bought several clocks for $3.97. 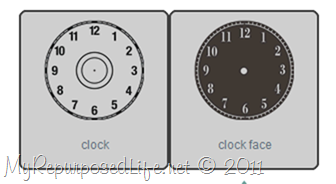 I downloaded two clock faces from the Silhouette online store. That’s one of my favorite perks of owning a Silhouette! No cartridge, no run to the store. 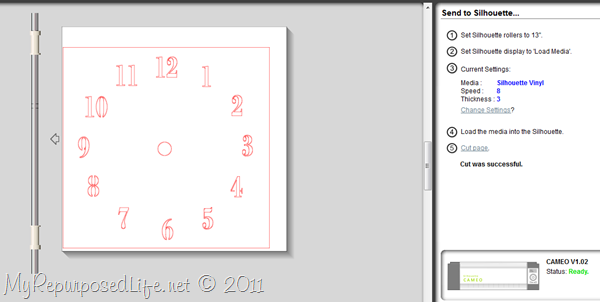 I removed the outside “frame” on both of the layouts. Can you see the steps—1) Set Silhouette rollers to 13”  2)  Set Silhouette display to Load Media. 3) Current settings  4) Load the media into the Silhouette. 5) Cut Page. I didn’t have any vinyl wider than the standard 9 inches, so I used contact paper. I loaded it directly into the Cameo without the mat. 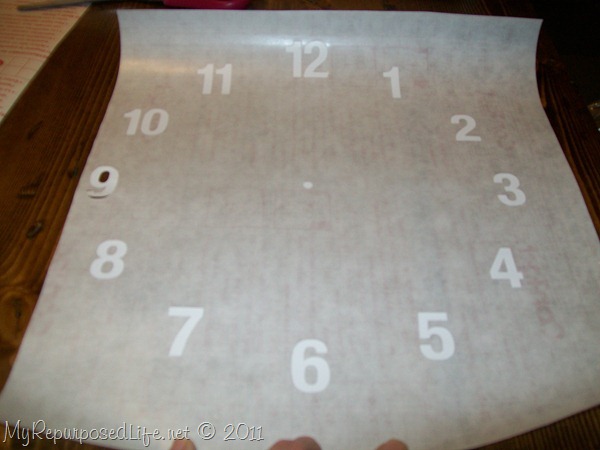 After the Cameo cut my vinyl, I peeled away the excess to leave only the numbers. I used some clear contact paper as “transfer” paper to put the vinyl on my record. 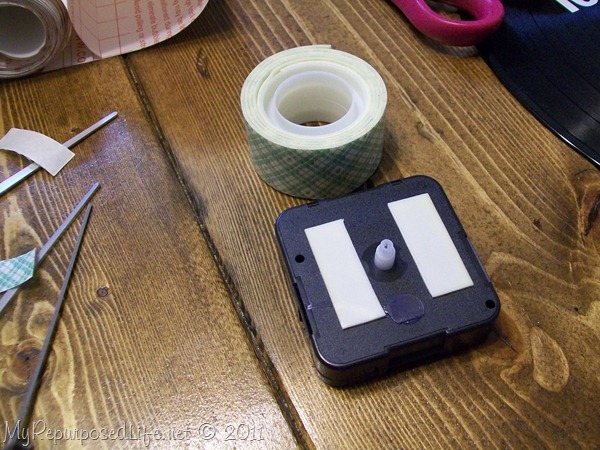 You can see that I took the hands off the clock movement. I used some double stick mounting tape from 3M to attach the movement to the record. 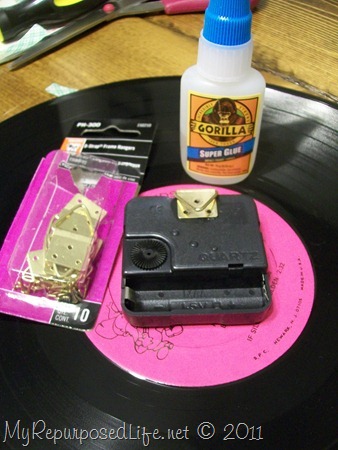 I used my favorite super glue by Gorilla Glue* to attach the hanger to the back of the movement. 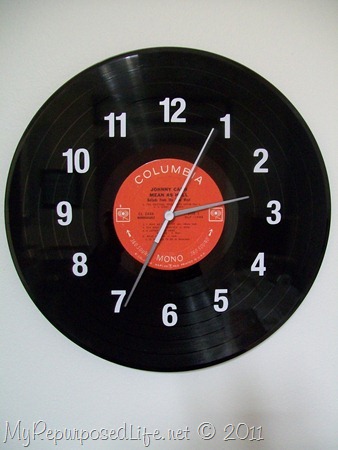 I reattached the hands to the movement. 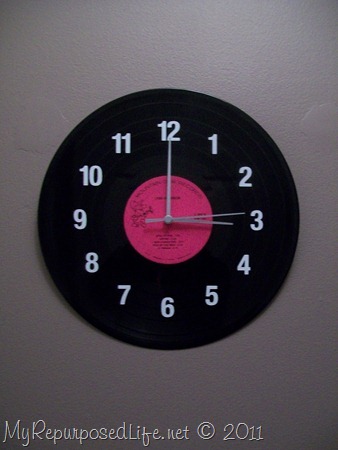 I apologize for the poor quality. It rained all day on Sunday and I couldn’t stage my clocks outside. 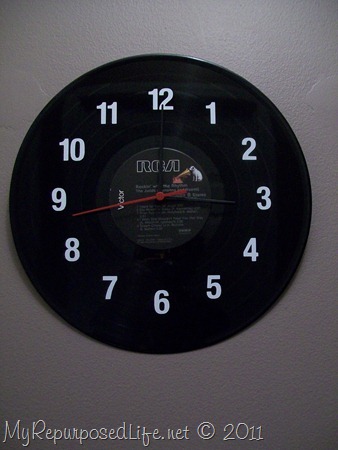 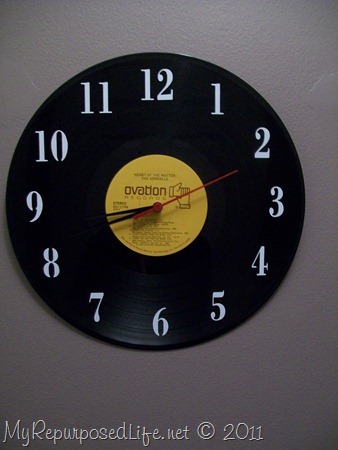 I suppose this would be possible to do with my Silhouette SD, but I would have to cut it in stages.
UPDATE:  I spray painted some of the hands white so they would show up better. It’s impossible to find white hands on cheap clocks! 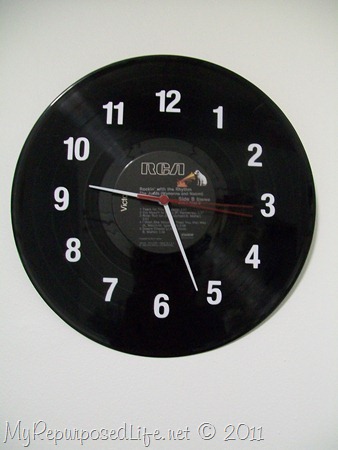 Note to self—straighten the clock before you snap that picture! 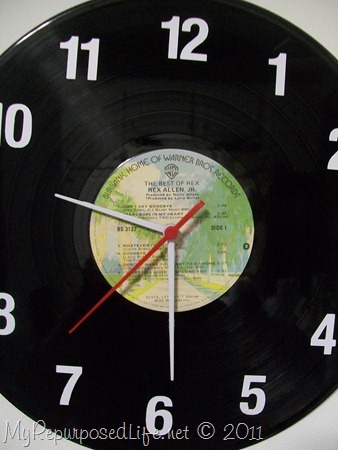 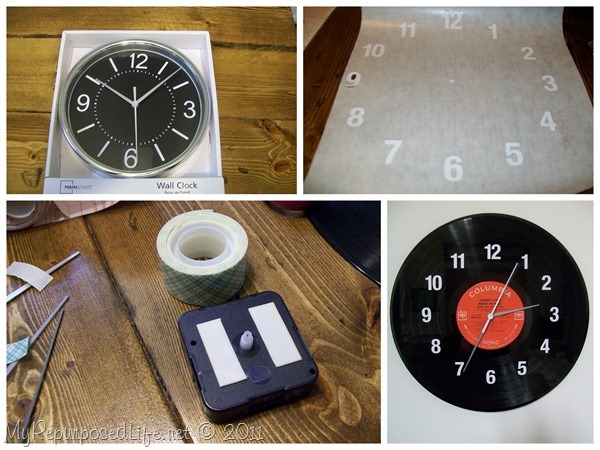 I struggled with getting the settings right with the Cameo. The directions call for setting the blade on 1. I was unable to get the Cameo to cut any contact paper or Silhouette Vinyl with a setting of 1. I moved it to 2 and it cut the contact paper with ease. You can see that I changed the settings above to a thickness of 3 instead of the default settings on the Cameo (for the contact paper). I will be phoning support to discuss the problems I had.
The blade setting is so easy to change. Where the Silhouette SD had 3 color coded caps, the Cameo has a dial directly on the blade housing. There is a little ratchet thingy right on the machine to turn the dial.

I have a LOT more records . . . I see some more clocks in my future if they sell at the booth.
gail
Pin It
Disclosure: Silhouette sent me the Cameo to review, however all opinions are my own. I do not  receive any compensation for blogging about and/or sharing my many projects and tutorials with my readers.