Earlier this summer I helped my sister with some painting and such, well, mostly painting. I’ve gotten sidetracked and she’s having saw problems, so some of the project is on hold. (foyer). However she was able to finish up her living room and dining room. She chose two shades of green, one for the living room, the other for the dining room. She doesn’t have a wall to separate the two rooms, so she used a faux column. I think it turned out fantastic! The rooms look so much brighter and cheerier!

In her own words, she describes what she did:
I wanted to find a way to ‘break’ up the living and dining room with a different paint color scheme. I live in a bi-level and there is no wall between the rooms. 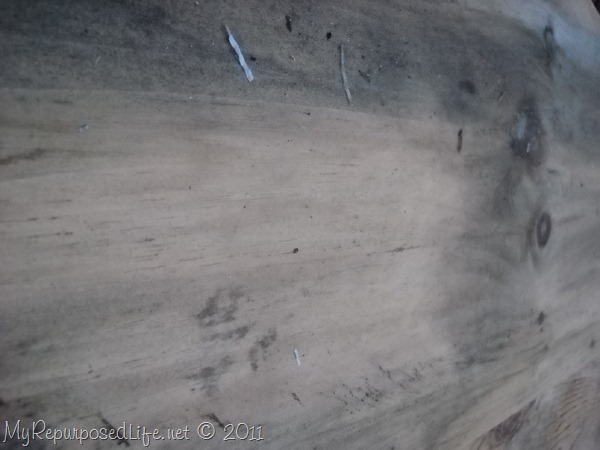 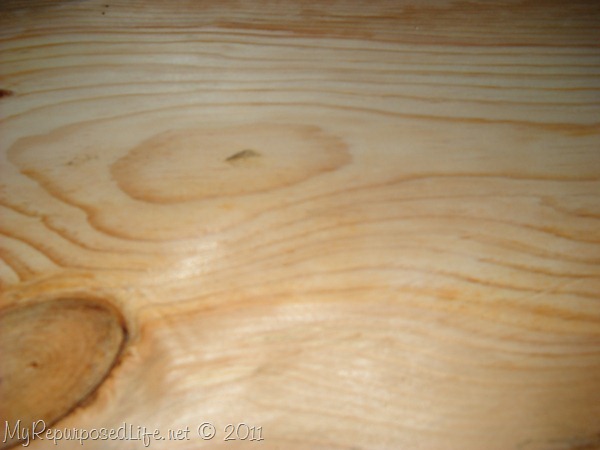 I decided to use a fake ‘column’ on the walls to separate the dining room from the living room and kitchen. I chose board and batten to offset the darker accent color. I had aged pine lumber available but it was unsightly. I planed it to approximately ½ inch thick by 3 ½ inches wide. 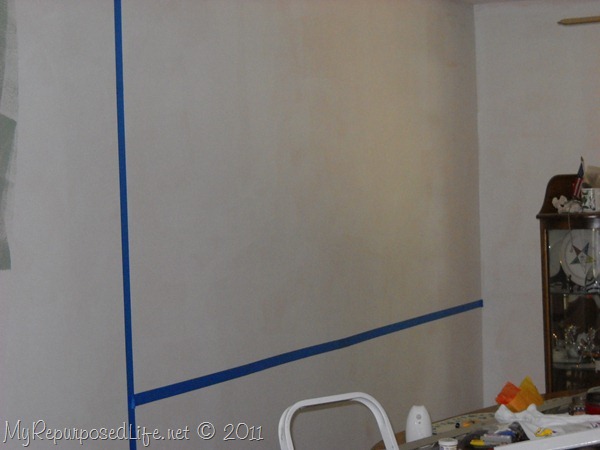 Using a level, I used Scotch blue painter’s tape to mark a line 36”from the floor for the horizontal lines and a vertical line was marked to separate the living and dining room. 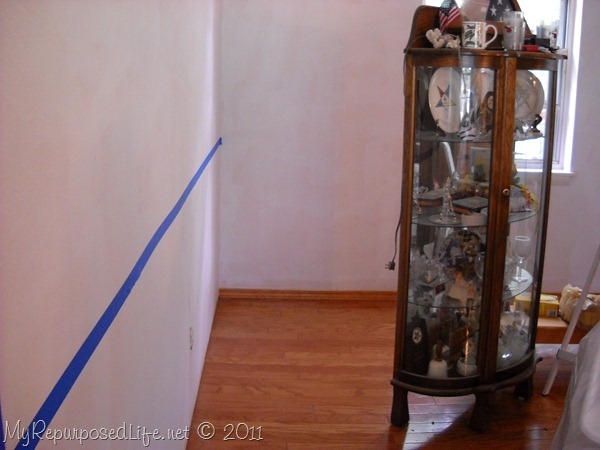 When the room started to come together, I decided to trim out the window as well. Previously, the only trim was a window sill. Using baseboard, I trimmed out three sides of the window before proceeding with the board and batten. (note the window) 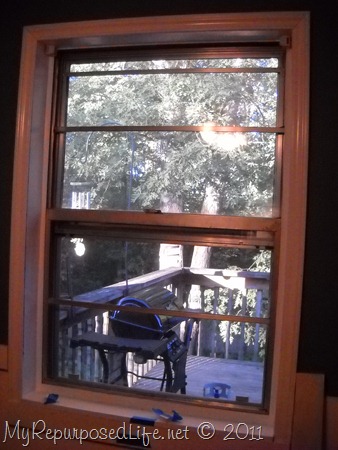 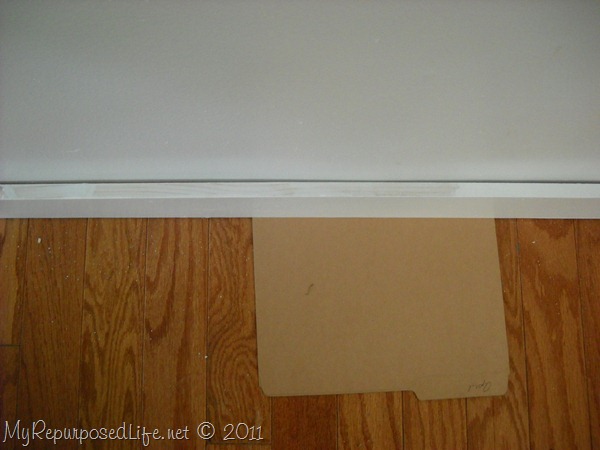 The columns were placed at the newly defined lines of the dining room. The first board placed on the wall was the top horizontal board using the paint line as a reference for the center of the board. Checking for level, the board was nailed to the wall. Next was the baseboard. I chose to place a manila file folder under the baseboard. With laminate flooring, it is easier for me than trying to tape the floor when trimming. The folder leaves a small gap, but it isn’t noticeable. Next time I paint, all I have to do is put the folder under the baseboard for easier trim work. 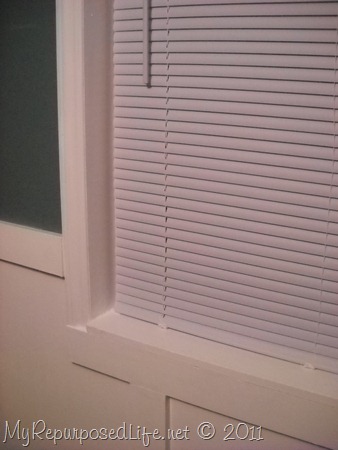 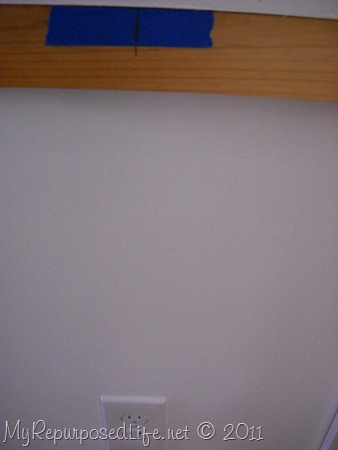 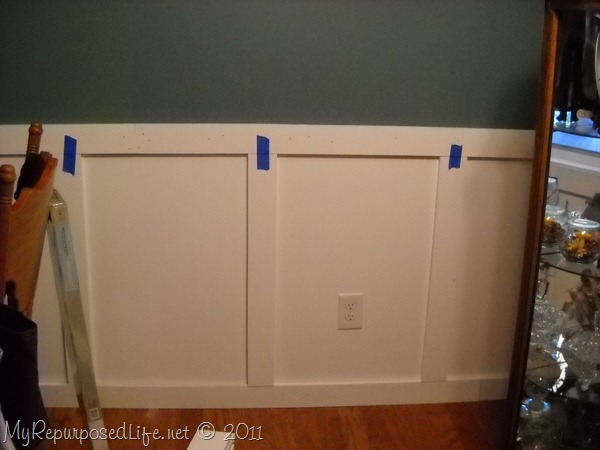 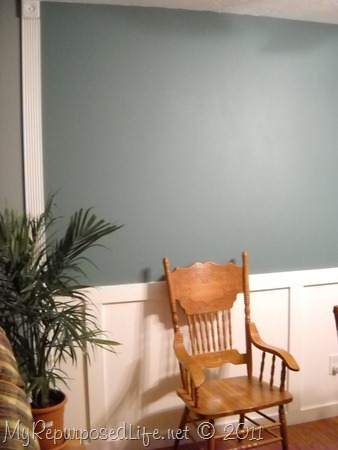 Once everything looked the way I wanted, nails were used to secure to the wall. I didn’t use liquid nails because that would make it very difficult to remove when redecorating without destroying the plaster walls. Keeping it real: My walls were not perfect and the horizontal boards didn’t fit against the walls in all places. For those places, I used drywall screws to lessen the gap. Be sure to sink the screw heads below the surface so that caulk will hide them before touching up the paint. 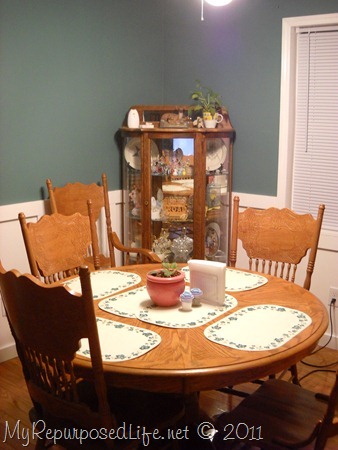 All of the boards were primed and painted before attaching to the wall to minimize trim work. Once everything was nailed, it was time to caulk. I didn’t realize it would make such a HUGE difference. It filled in all of the small gaps and gave it a more custom, finished look to it. Patience is definitely required and it isn’t something you want to start unless you have the time. You don’t want to rush through it. It can make or break the entire look. Once the caulking is done, there will be some trim work, but then sit back and enjoy your accomplishment. 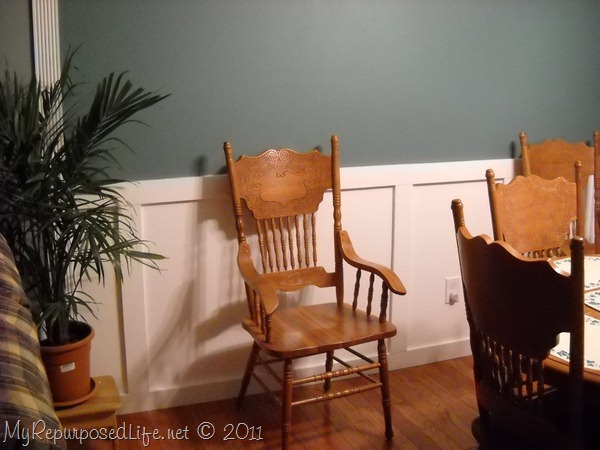 Didn't it turn out fabulous? I LOVE board and batten. Thanks Jo for sharing this great makeover with my readers!
gail