It has been over a month since I have shared any of my recent finds with you. I’ve been picking up some random items but since I have my booth at Vendors’ Village I typically only get one or two items when I stop by to check on my booth. 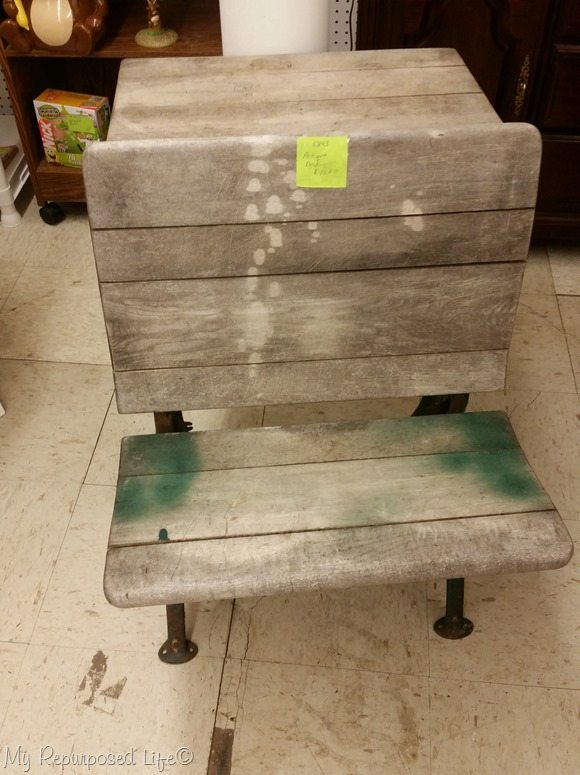 I was lucky to happen upon this little bargain, that’s the great thing about stopping by the store often, I see things before they get scooped up. This little gal gave me quite a bit of trouble, you can read all about it tomorrow. 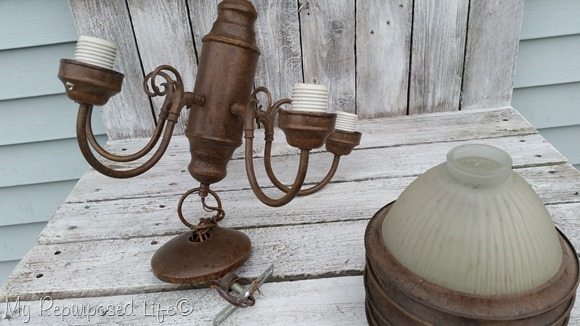 I got this free pendant light from my neighbors Rodney and Marianne. 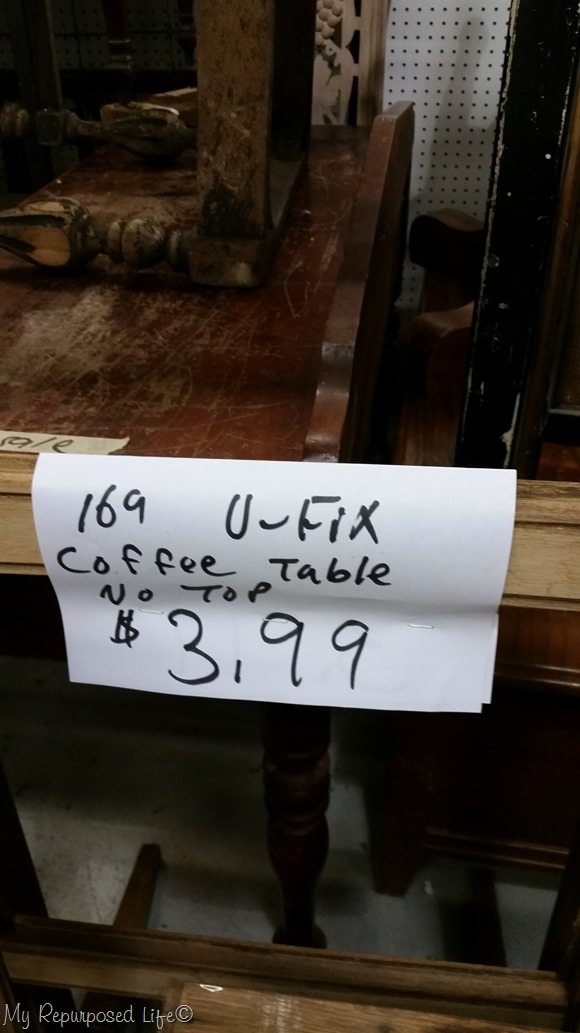 There is a booth in the back room of Vendors’ Village that has some great deals. John has some new way of pricing his items. U Fix It! I’m a sucker for broken furniture. 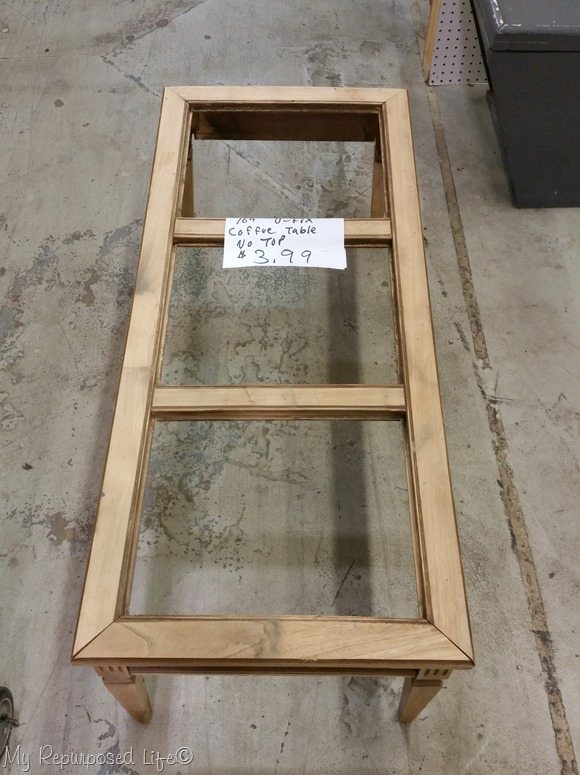 This mid-century modern (?) coffee table was a steal for less than $4. 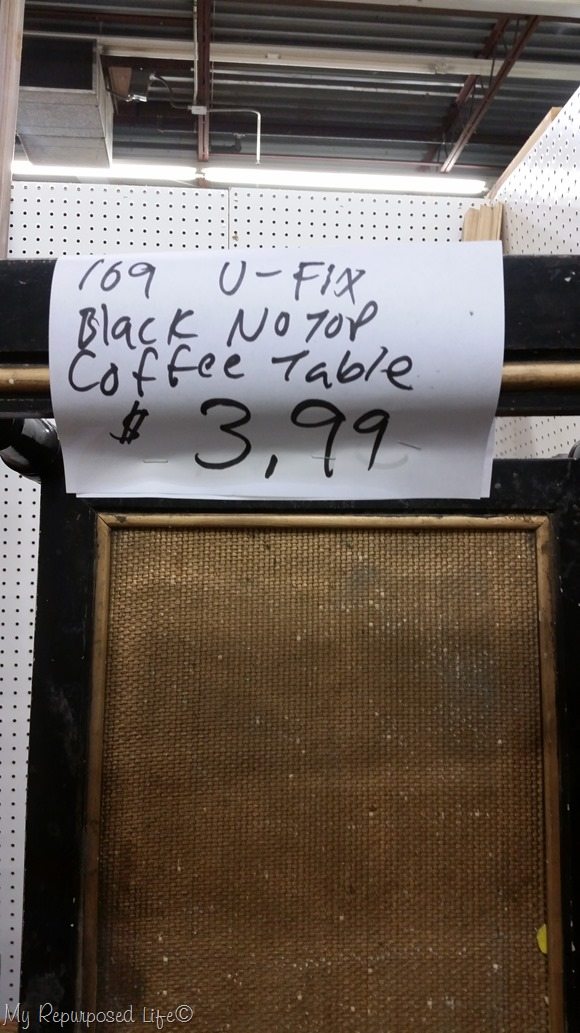 Another good deal on a $4 u fix it table. 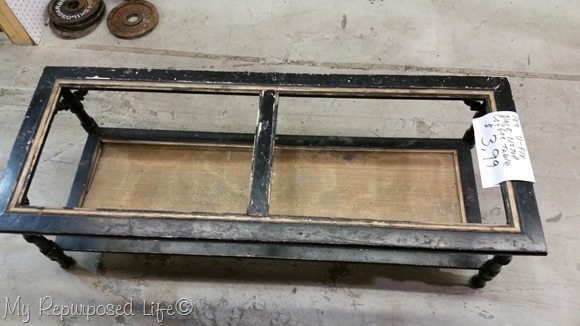 I parted this out when I got home because it wasn’t really worth my time to work on it. 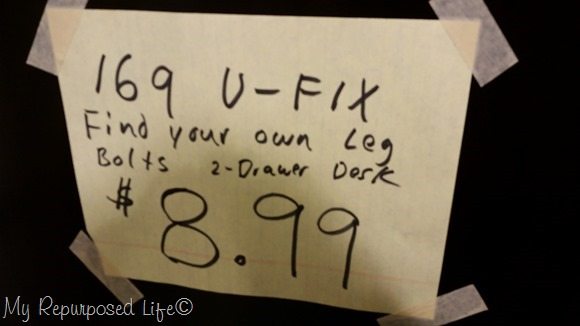 This was a kitchen table that I passed on. 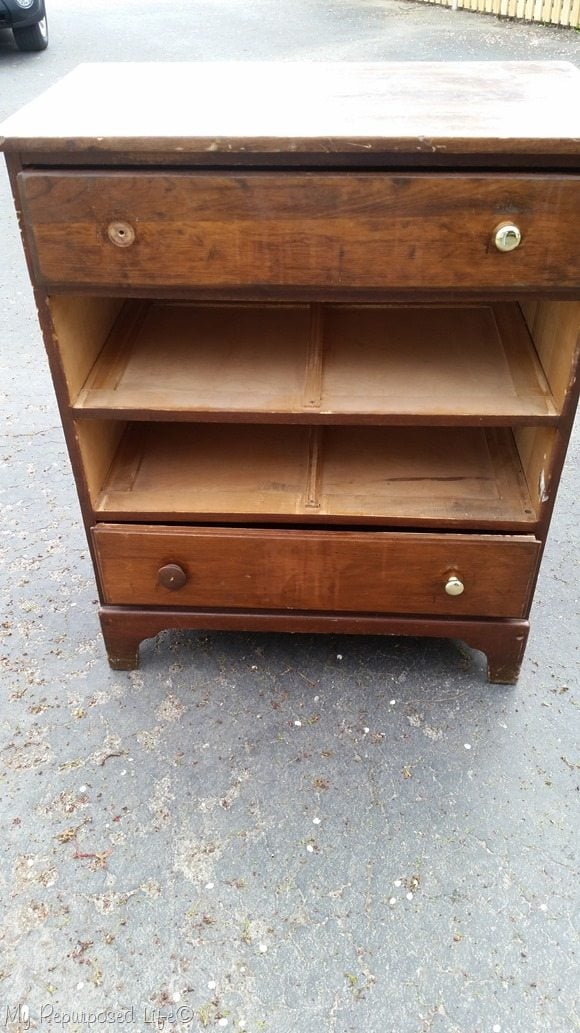 This sad little piece has had a very rough life. The top of it has already been cut off once, probably due to missing or damaged drawers.

Rodney found this on the side of the road and dropped it off to me. 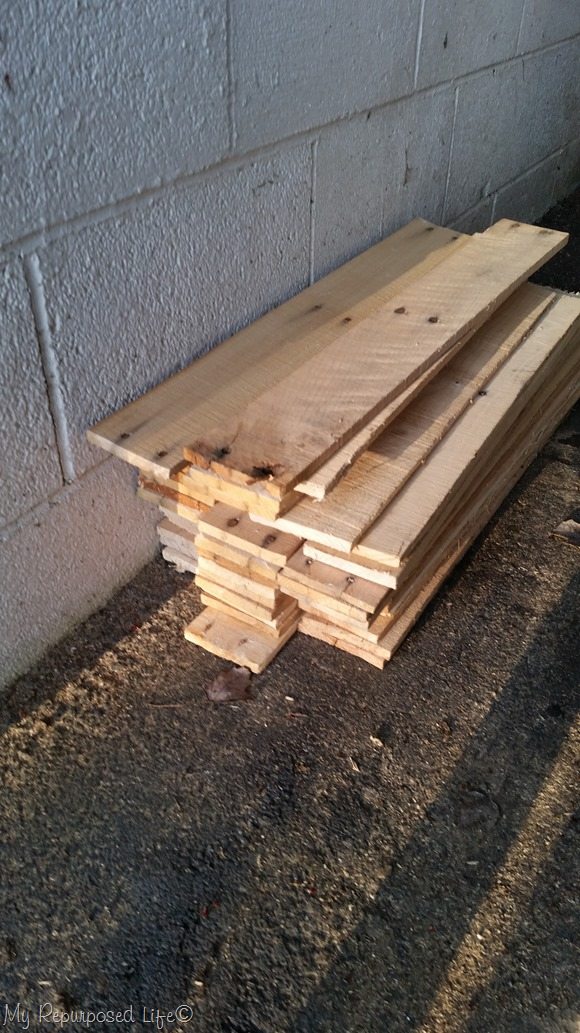 I came home one day to find that a friend had dropped off these nice little scrap pallet boards. 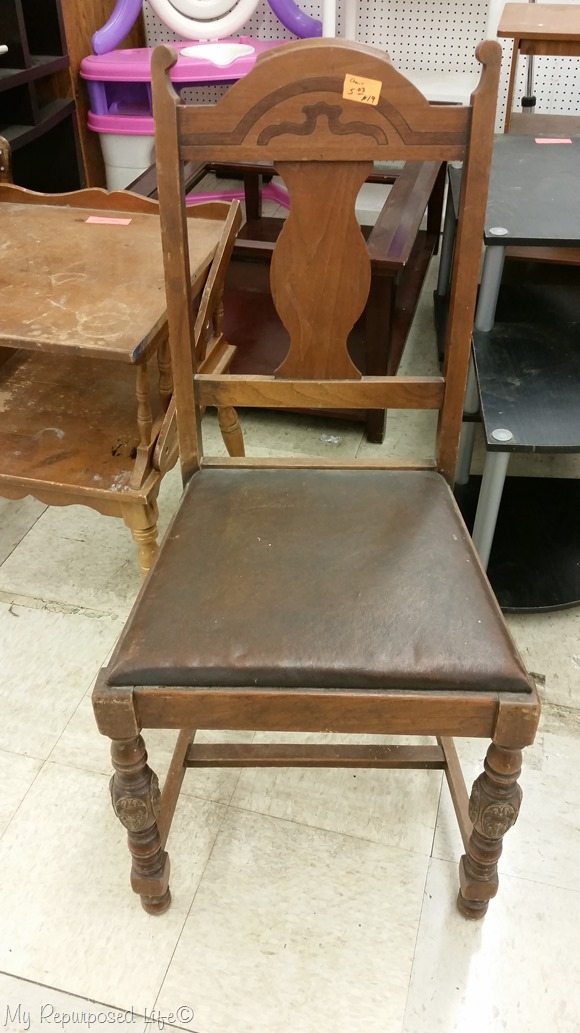 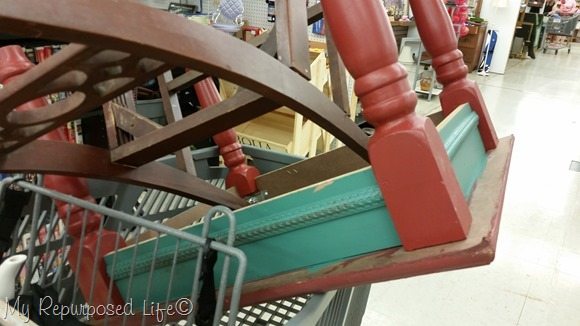 Saturday was the Dixie store’s 2nd anniversary and there was a big sale. I went to check on my booth and couldn’t pass up some bargains. 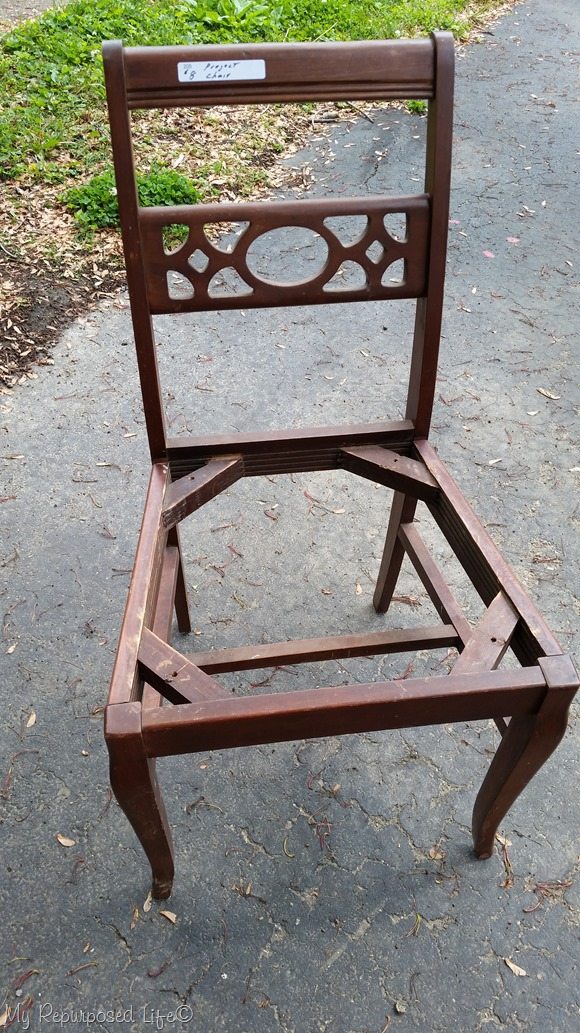 Hi, I’m gail and I have a problem, I can’t pass up a good deal on a chair. 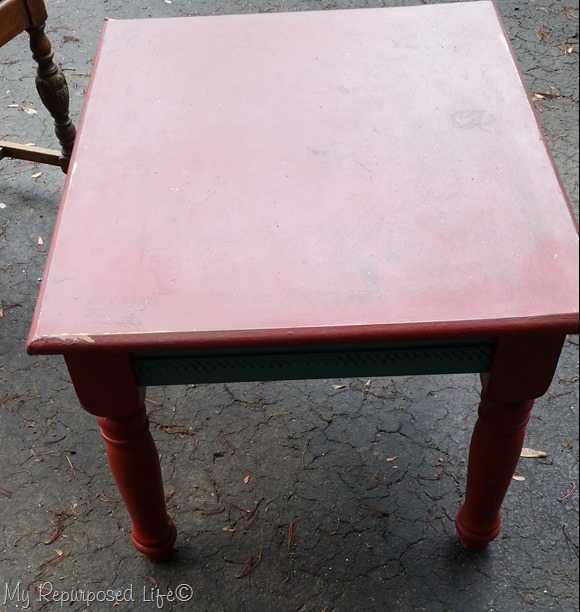 I had noticed this table a couple of weeks ago, because I liked the trim and the legs. Apparently the owners of the booth had taken what they wanted near the end of the day and left a sign on the wall, FREE. So, it had been $20, and I got it for free. 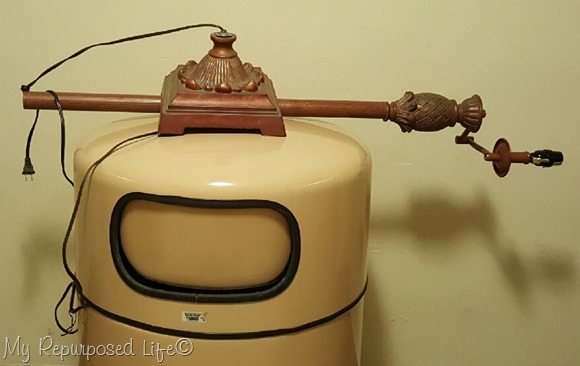 Last, but not least is this floor lamp from early April. I took a quick impromptu trip to Orange Beach Fl. for Spring Break. Our last night at the condo, my friend Leann wanted a drink out of the vending machine and on our way there she spotted this lamp. We had two teenage girls with us and a LOT of stuff in the trunk of our rental car, but after some disassembling, we were able to get the top and the base in the car.

Proof positive that you never know where your best stuff will come from.