When I made my whiskey barrel planters or what some may call Texas Lampposts I planted vines to grow up the 4x4 post. However, said vines will take awhile to mature and actually climb and bloom. So, the tall posts looked a little naked. My partner in crime, cousin Terry suggested I add some hangers on the posts so they don’t look silly standing tall all alone. She came up with the design, and actually did most of the building of these diy bracket holders while I was busy getting stuff together for the backyard camper retreat.

During the backyard makeover, you can see that from a distance the tall 4x4 posts look a little bare.

I love this shot of the camper retreat at dusk. When the tiny solar lights are lit, the poles don’t look so bare, but in the daylight hours they needed a little something to dress them up.

How to: DIY Wooden Bracket Holder

The construction of the diy bracket holders to hang on the posts is really simple. They are also very inexpensive since they are made from scrap wood. My favorite kind of project!

For each diy bracket you need a length of 2x4 and 2x2 stock. The size really depends on your preference.

Now, you may be saying, “why not just hang the decor from the metal brackets attached to the 4x4 post?” Well, you could do that if you want to skip the step of making your own bracket holders. But personally I think Terry was right in insisting we did it this way!

Don’t you agree? See how much prettier the wooden diy bracket holders look? It just adds to the charm of the whiskey barrel planters. 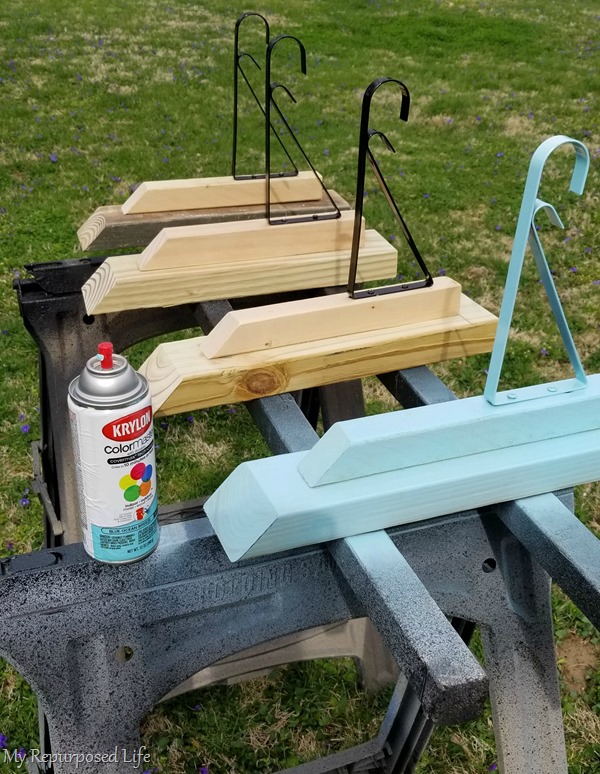 You could leave the wooden brackets natural, stain them or paint them. We chose to spray paint the bracket holders. 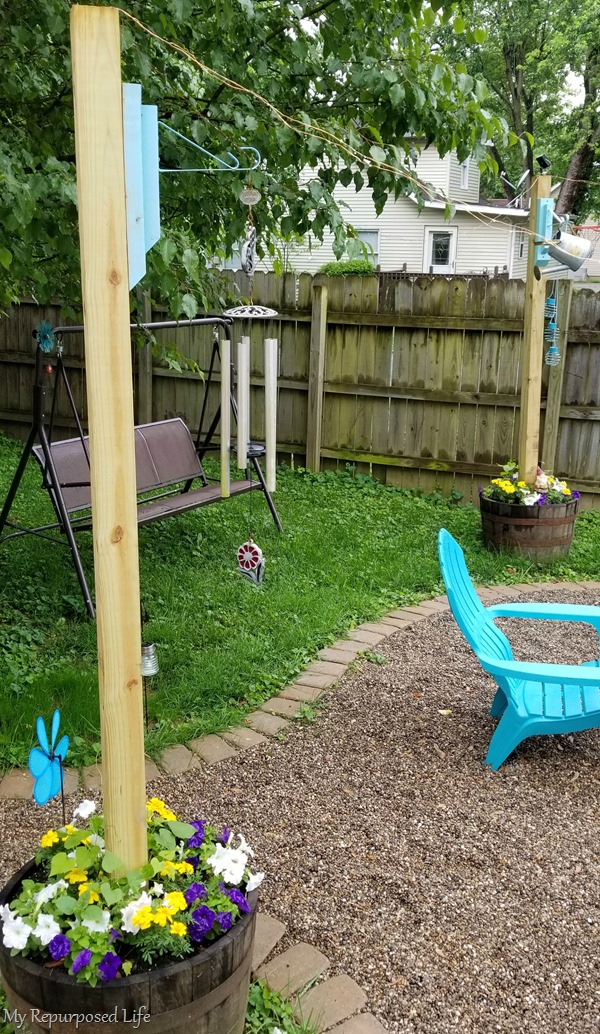 You could hang anything you please from these new brackets. I chose wind chimes, including the wind chime that needed restringing. On the other posts I hung watering cans. You can see the flowers are starting to fill in nicely in the whiskey barrels.

I planted Petunias and Marigolds. In addition, I planted seeds for Morning Glory, Four O’Clocks, and Moon Flowers. That seed combination was Terry’s recommendation. These varieties will grow up the 4x4 post and bloom all day long.

Although I hung the solar lights on top of the lampposts, they have stakes so that you could line a walk way or even put them in an ornamental tree. The pretty blue spiral solar lights are from The General Dollar Store.

These wooden DIY bracket holders would be great to hang on a fence or a deck, instead of just using the metal brackets by themselves.

Even on a rainy day, my backyard makes me smile!