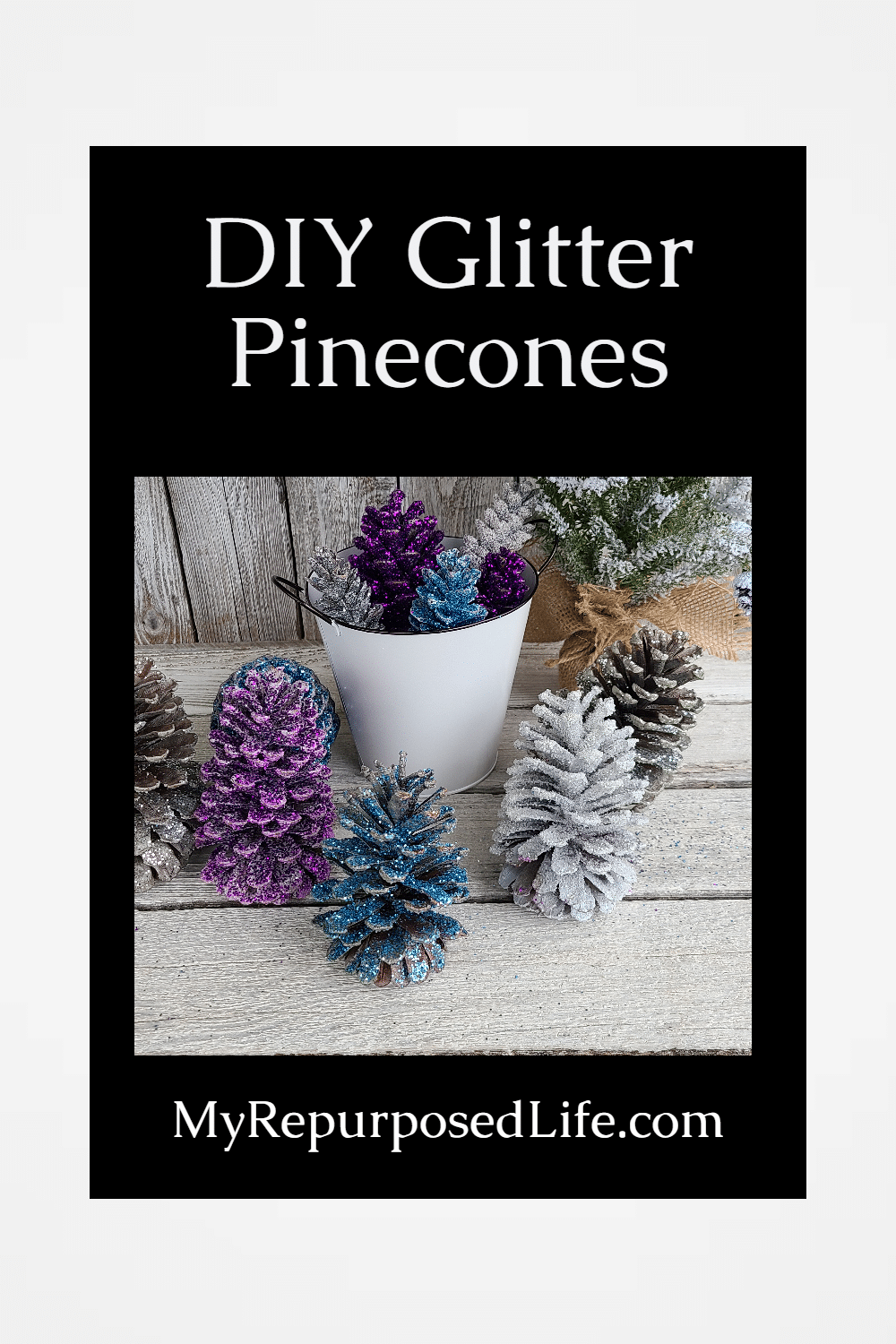 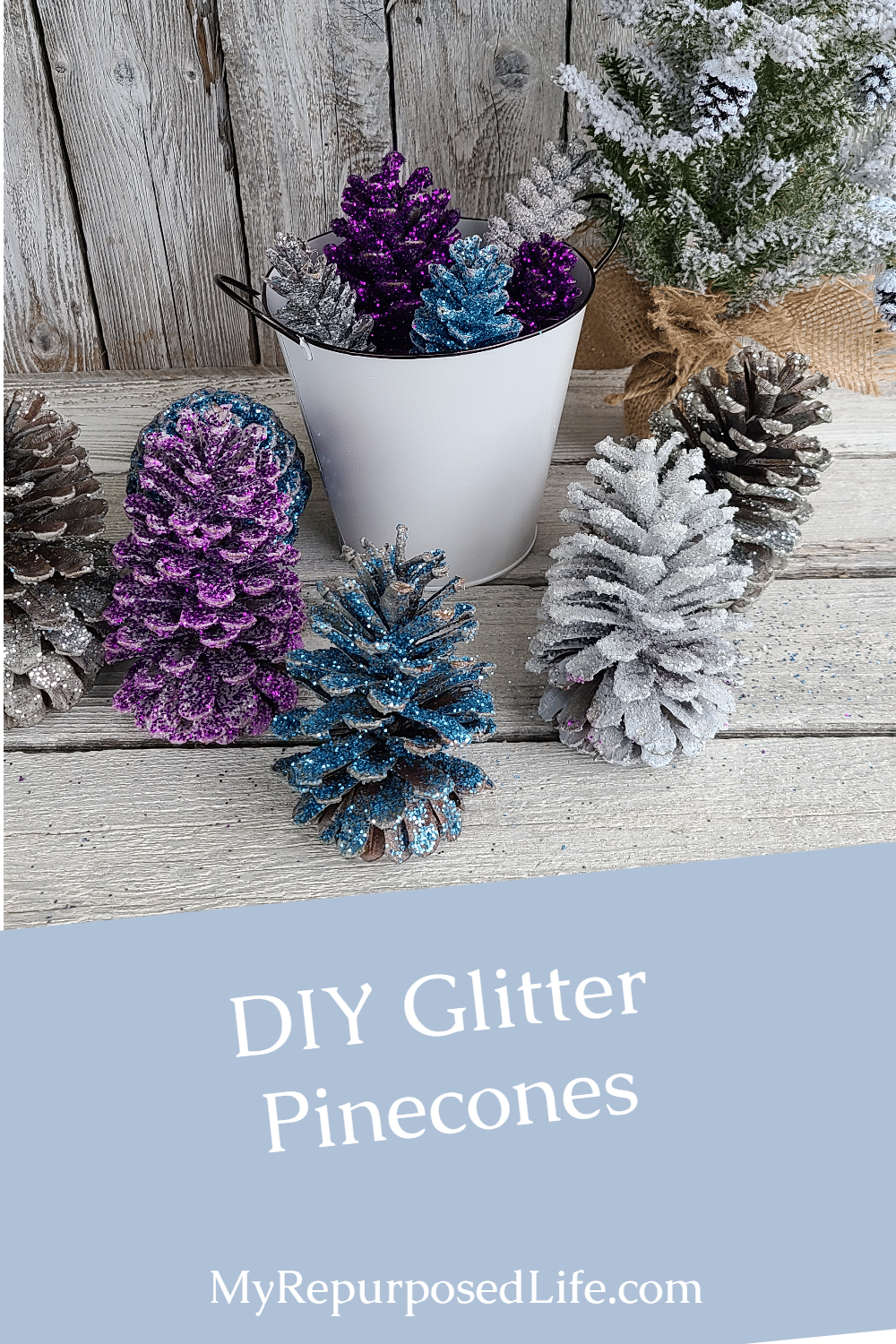 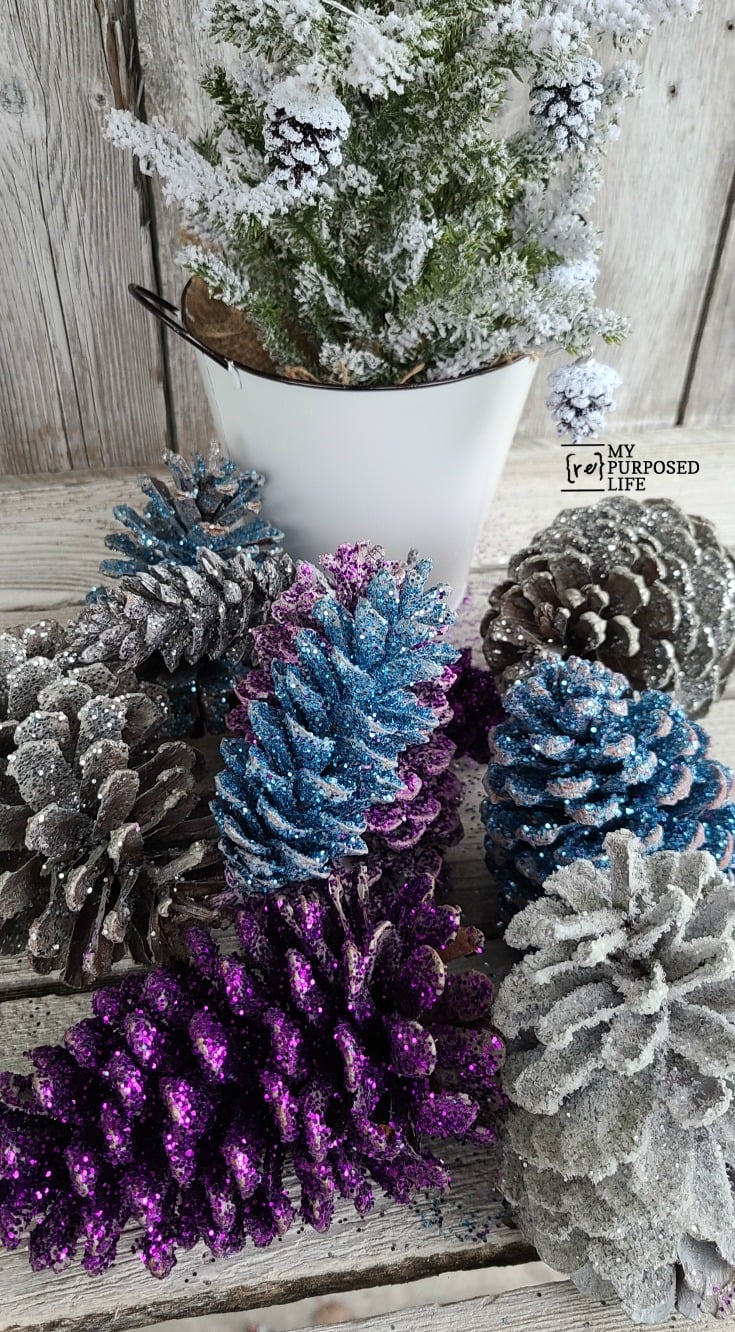 I purchased the glitter on Amazon, but I had everything else on hand. Keep reading to hear more about the glitter I used.

If you collect pine cones from your yard, you will want to bake them in a slow oven. I did 200° for 45 minutes. The pine cones I used for this project were leftover from the ones I used for Tree Branch Christmas Decorations.

I was inspired to do this project by ideas I found on Pinterest. But the tutorial that intrigued me the most was from The Homes I Have Made. I LOVE the colors Megan used.

Megan started with painting her pine cones. I grabbed the first metallic spray paint I found. Then, I realized it wasn't the best for me. I chose to use two identical amazon boxes for spraying and glittering. Each box was lined with brown craft paper that came in the box. Do you recycle those boxes? I do, because I’ve been ordering online a lot!

Do you see the small branch? It came in handy for “stirring” the pine cones while spray painting.

TIP: Raise your spray paint project UP off the ground! It makes it so much more comfortable.

When I first started, I was using a different spray adhesive, but it stopped working so I switched to this 3M product. The screwdriver was to open each of the new containers of glitter.

It was difficult to take pictures because of the stickiness, and the glitter. After painting, I sprayed the adhesive, then sprinkled the glitter. Of course, the glitter fell off the pine cone, and landed on the paper. It wasn’t long before I realized that if I gathered up the brown craft paper and did sort of a “shake & bake” technique, it really helped coat the pine cone with glitter!

After shaking and spreading the glitter, there was very little waste. After each color, I then shook the excess glitter into the box, and started with another color.

That being said, before I started the “shake & bake” method, there was a considerable more amount of glitter on the paper. In that case I folded the paper in half, opened the container of glitter, and poured it back into the container. Having been a pre-k teacher for 19 years, I definitely did my share of glitter projects, and learned a lot of tricks!

Was I happy that I used gloves? Ohhh, yes I was!

Allow Your Project to Dry Well

I took this photo to try to show you how much glitter I used for this project. While shopping on Amazon for glitter, I avoided getting “very fine” glitter. But the decisions of buying these bottles took forever. That is why I decided to fully show you what I bought and how far it went.

What Is The Best Glitter

In the top left image, you may notice how the middle pine cone looks different? It was spray painted WHITE, and the glitter was added immediately after painting with no adhesive.

The top right image—painted with the metallic paint, and the less than perfect adhesive was used.

For the bottom left image—sprayed with metallic paint, but the 3M adhesive was used.

On the bottom right, the large pine cone was sprayed with metallic paint, good adhesive, then glitter. The smaller pine cone was not painted, only glittered.

What Colors Were Used?

These are the colors that were used in case you would like to sue the same brand and color.

The jar of silver glitter was the only easy on, easy off screw on lid. That made it really easy to add the loose glitter back to the jar. The other three jars involved carefully prying the lid off.

How To Store Glitter

Before bringing the glitter shakers into the house, I slipped each into a plastic baggie for safe keeping! Spilled glitter is NOT a mess you want to try to clean up.

In order to try to keep loose glitter out of the house, I used my leaf blower to blow the “nearly” dry pine cones to remove excess glitter. See more clever ways to use a leaf blower.

Here are the glittered pine cones in my faux enamel bucket.

Do you love them as much as I do?