Happy New Year! It is great to be back at My Repurposed Life!

In case you are new here, my name is Mindi. Nice to meet you! I blog at My Love 2 Create, and love contributing for Gail once a month.

Today I am sharing my Repurposed Cupboard Door Lap Desk, which I am so excited to have. I have been wanting one for a long time! 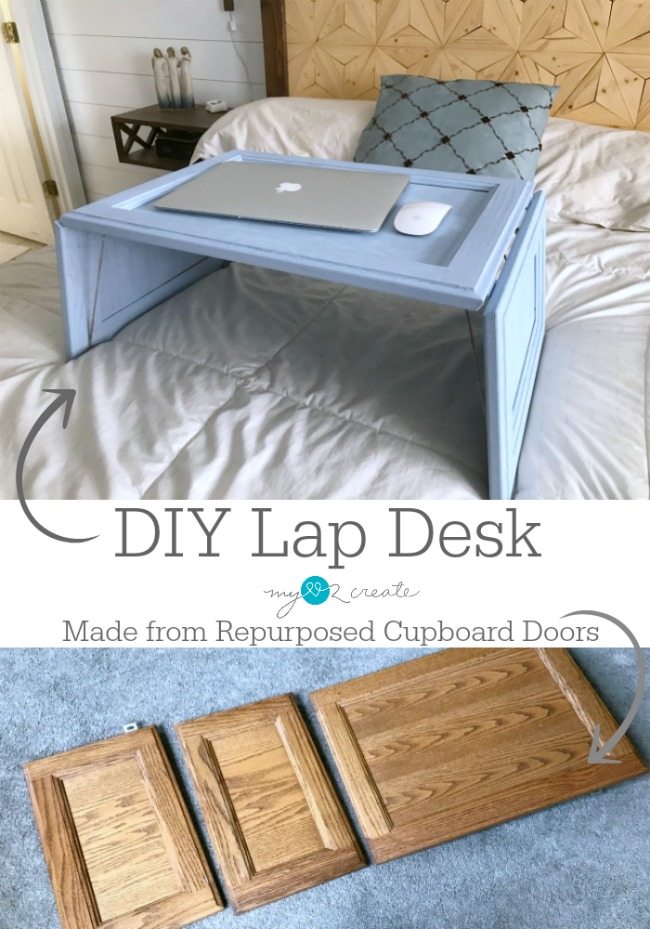 Isn't it so cool!?! It ended up turning out perfect for my needs! 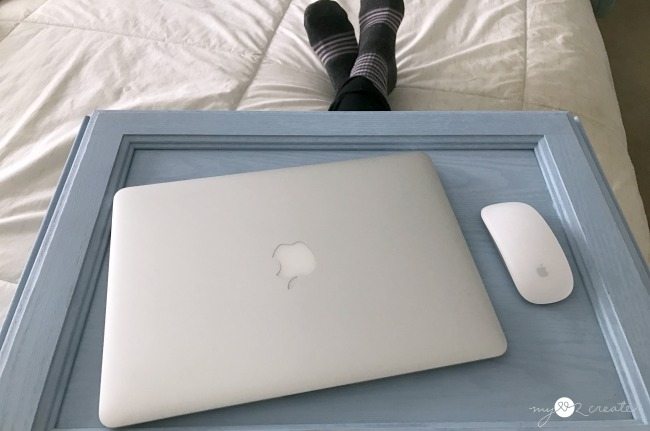 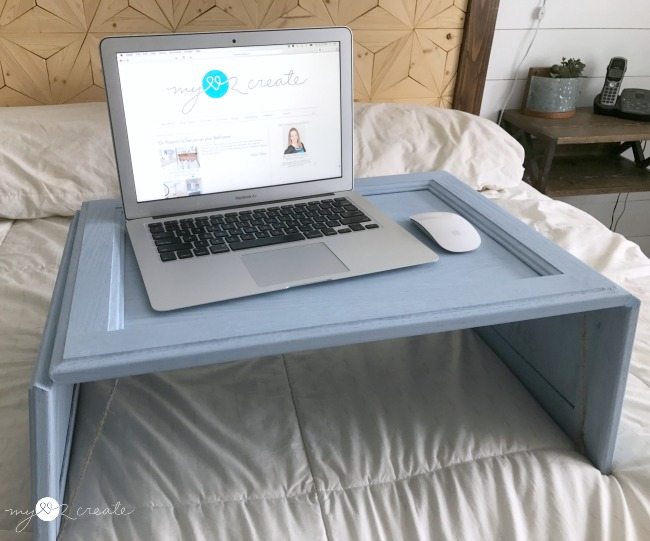 I got a whole kitchen's worth of cupboard doors from a friend and have been repurposing them for different projects. 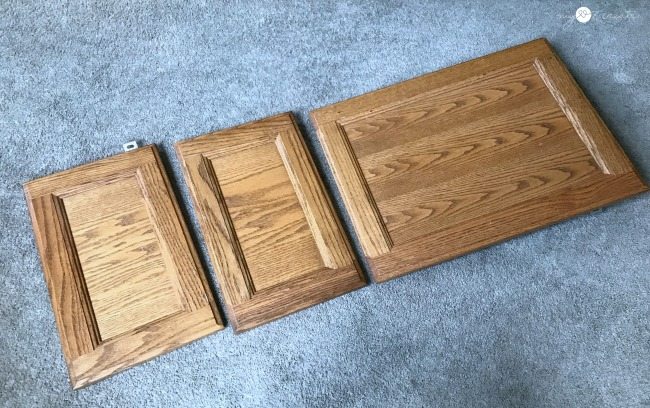 I noticed that these three were all the same width, if I turned the narrow one's on their side, which gave me the idea that they could be the legs for a lap desk. Since I have always wanted one, I set to work. 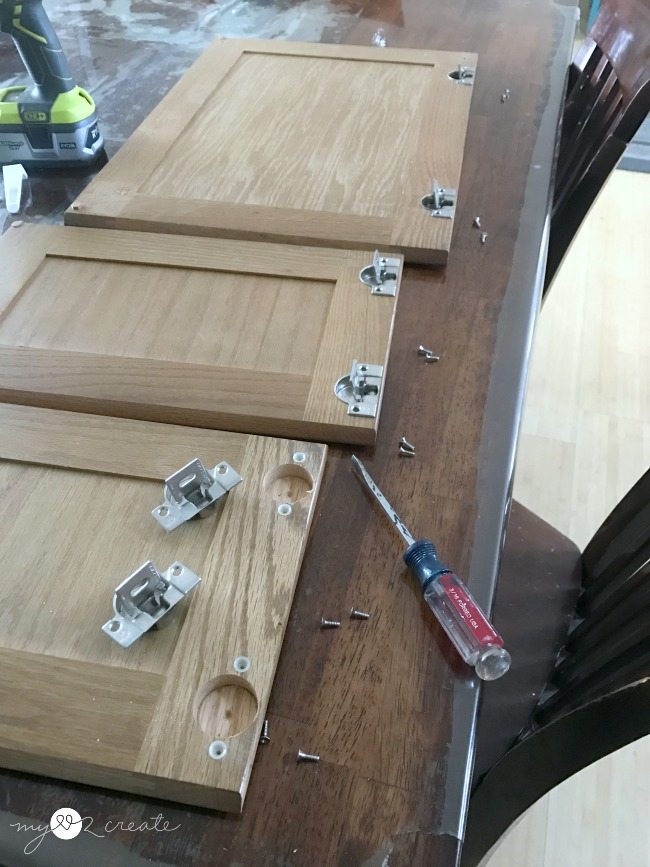 I removed all the hardware on the back first.

Originally I was planning on attaching the "legs" or small cupboard doors with pocket holes into the desk top, and obviously you could still do it that way. But then I thought it would be great to have them fold in, so I bought some hinges and started attaching them together.

Unfortunately the hinges I purchased had faulty screws. I installed the first few and as I was attaching the other side, the heads of the screws started popping off! What?! The bottom of the screw still stuck into the wood, but no head to hold the hinge on. I was so annoyed that I ended up returning them to the store and bought new hinges (in a snow storm I might add).

The new hinges and screws worked great, but with all my irritation at the time I had wasted, I didn't even think to take pictures. Luckily installing hinges isn't rocket science. 🙂 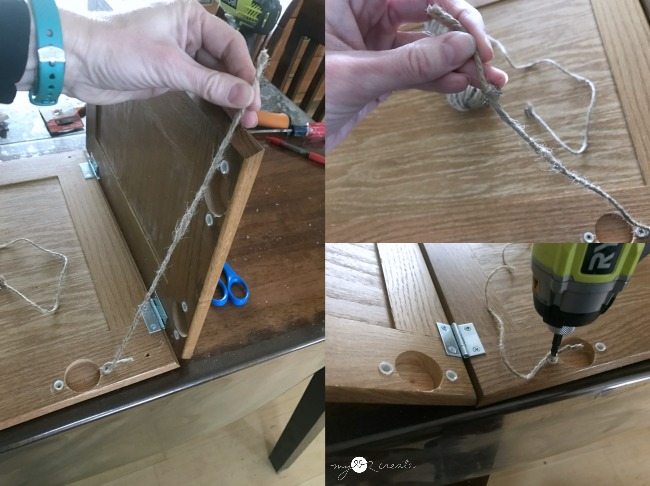 In my mind the hinges were going to be great, but in reality they made my desk pretty darn flimsy. The legs were way to mobile, and I quickly realized I needed some supports to hold them. (in the back of my mind I knew this would happen but sometimes I don't listen to that voice...like I should)

I debated taking the hinges off and using my original plan of pocket holes, but my stubbornness at wanting the legs to fold in for storage won out in the end. Plus, I had gone to so much trouble with two trips to the store to get the hinges...so I was determined to make it work.

To hold the legs in position, I ended up using the screws from the hardware I had removed and some twine. I tided a knot around the screw with some twine and then tightened the screw into the screw hole in the cupboard door securing the twine. 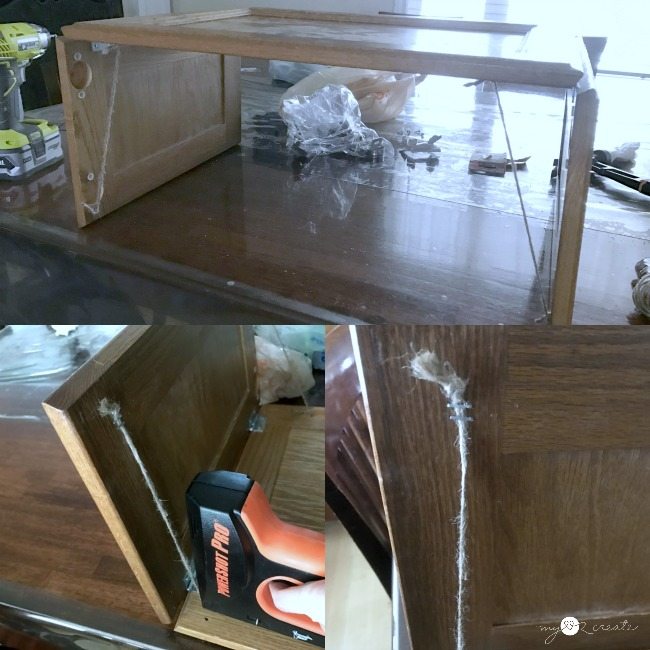 This did the job and I decided to secure the other sides with twine as well, just in case. This time I just tied a knot and secured the twine with staples.

Now the desk stands great, but if the leg gets knocked from the side it would fold in and fall over. I still preceded because, like I said...Stubborn. 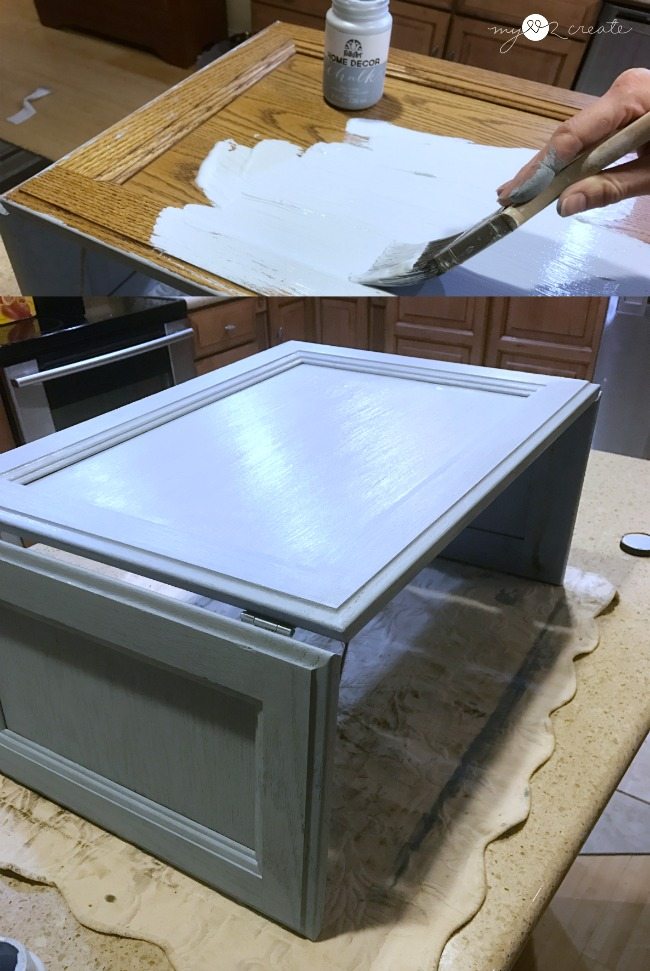 After cleaning the cupboard doors really well I painted it with two coats of a blue folk art chalk paint that I had on hand.

I sealed the desk with some clear wax and only had one more finishing touch... 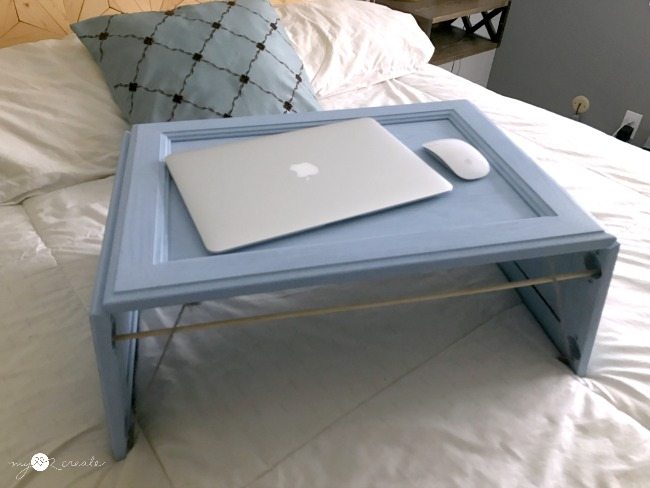 Since the holes were still in the cupboard doors from when I removed the hinges, I grabbed a dowel and cut it to fit inside of them. This was the perfect solution to making my desk sturdy so the legs won't fold in while I use the desk. It works awesome! 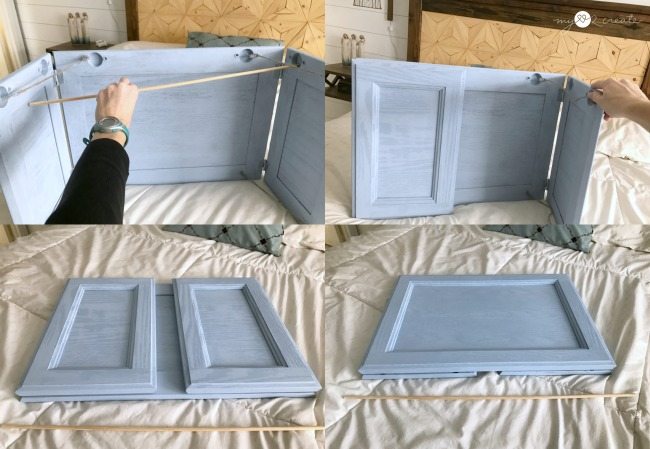 The dowel bends a little to put it in and take it out, but keeps the legs pushed out nice and secure. To put it away I just remove the dowel, and fold in the legs! Then I can slide it under my bed and out of site until I need it again! 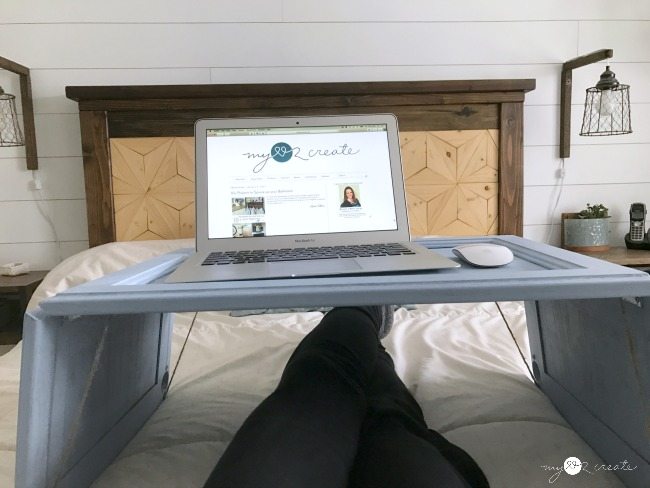 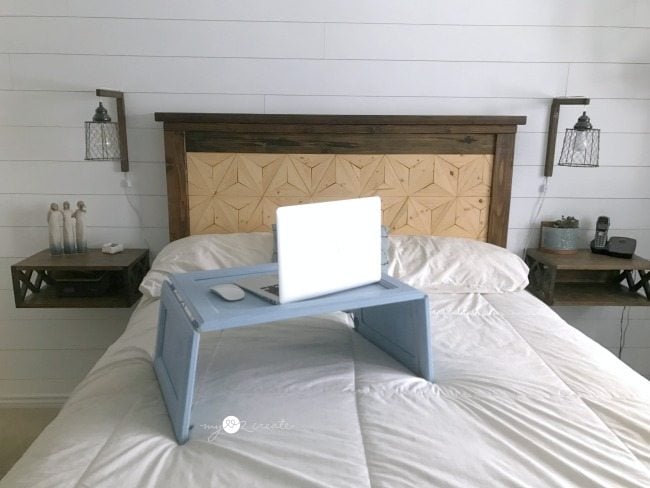 Because the cupboard doors were free, all I paid was around $4.50 for the hinges, everything else I had on hand. 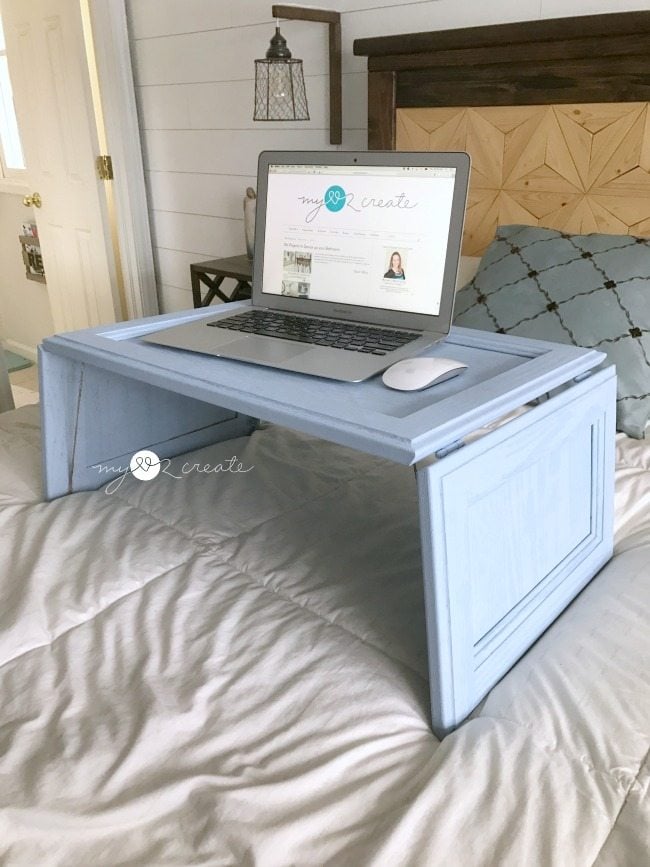 Not only can I use this as my lap desk in bed, but it could also be used for Breakfast in my Farmhouse Storage Bed too...I probably should drop that hint to the family... 😉 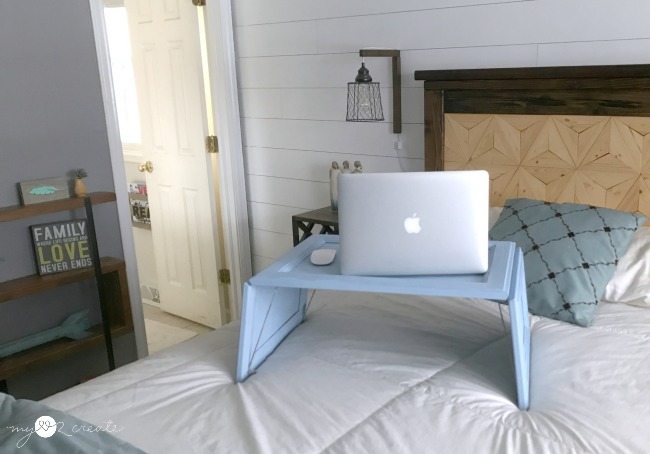 So have you repurposed any cupboard doors lately? Could you use a lap desk too?
Thanks for reading and please visit for more great repurposed project ideas and building plans!
Hugs!
Mindi