Wooohoo! My DIY Birdbath inspired Woman’s Day to make their own  version. I am a member of the Woman’s Day Pinterest Board. I pinned my DIY Birdbath to their board, and it got picked up as a small feature. They didn’t show my birdbath, but they mentioned me, and MRL. 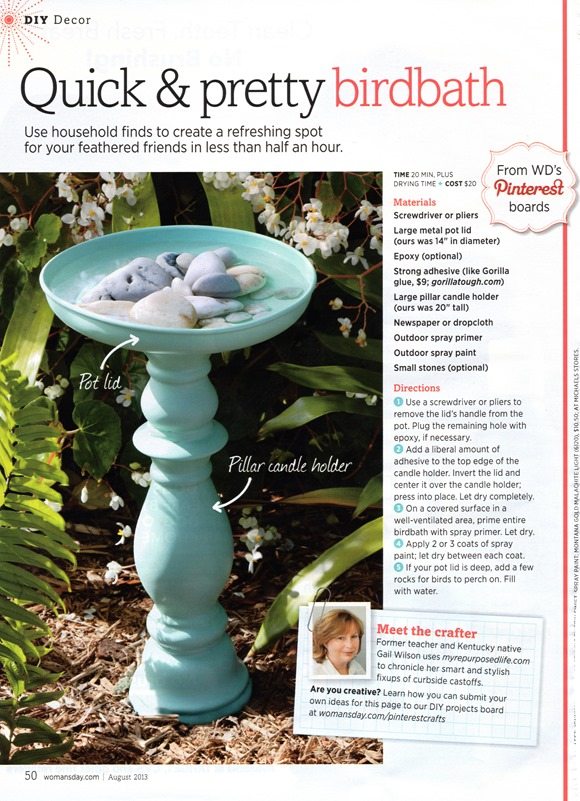 When they first contacted me, they said they wouldn’t put the blog name in the snippet, just my name. (saying “people will google you”)   So happy they changed their minds!

I’ve been meaning to pick one up, but I kept forgetting. Today, I stopped by the store to get one, and they didn’t have any. I was talking to Jamie, and she said she was going to the store and would check. Later she called to tell me that she got the magazine but didn’t see my feature. I was suppose to be in another magazine, and she was confused, looking for that article. She said “hang on, I gotta put the phone down”  She was flipping through it, and suddenly I heard her squeal… she hollered for Andy….. she was so excited for me. Gotta LOVE that girl! She texted me a picture, and I showed off it to my friends. We were having a girl’s night playing some cards. My friend Bert said “gail, it’s your turn”  to which I said “hang on Bert—I’m famous”. hahahah   I was trying to save the picture to my phone so I could enlarge it to see what it said.

I think I like how they described me. Gail Wilson uses My Repurposed Life to chronicle her smart and stylish fixups of curbside castoffs.   Makes me sound like a diva, don’t you think? 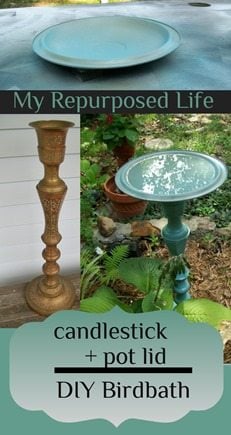 This was such an easy project, and it’s still one of my favorites.

Do you get Woman’s Day? Did you see me in there?

I've been asked what kind of paint was used for the Woman's Day version. It's available on Amazon: