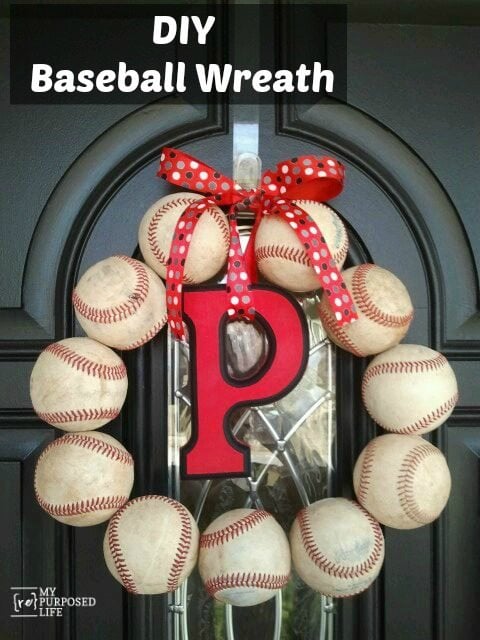 I have a fun repurposed baseball wreath in honor of Major League Baseball official opening day. My nephew Bubba has played or coached baseball his entire life. He started out playing at the age of 4. He played little league for years, and actually went to the Sr. Little League World Series in Kissimmee Florida where his team placed second. Bubba played in High for four years (pitcher), and then played at UNC Charlotte, and Volunteer State Jr. College in Gallatin TN (infield)  After that he was drafted by the Detroit Tigers Organization for two years. Then he played in the Independent Professional League in Florence Ky. (The Florence Freedom) Since then he’s been coaching where he went to  high school. He is currently the infield coach. So, long story short, his wife Anna wanted to make a baseball wreath for the front door of their new home. 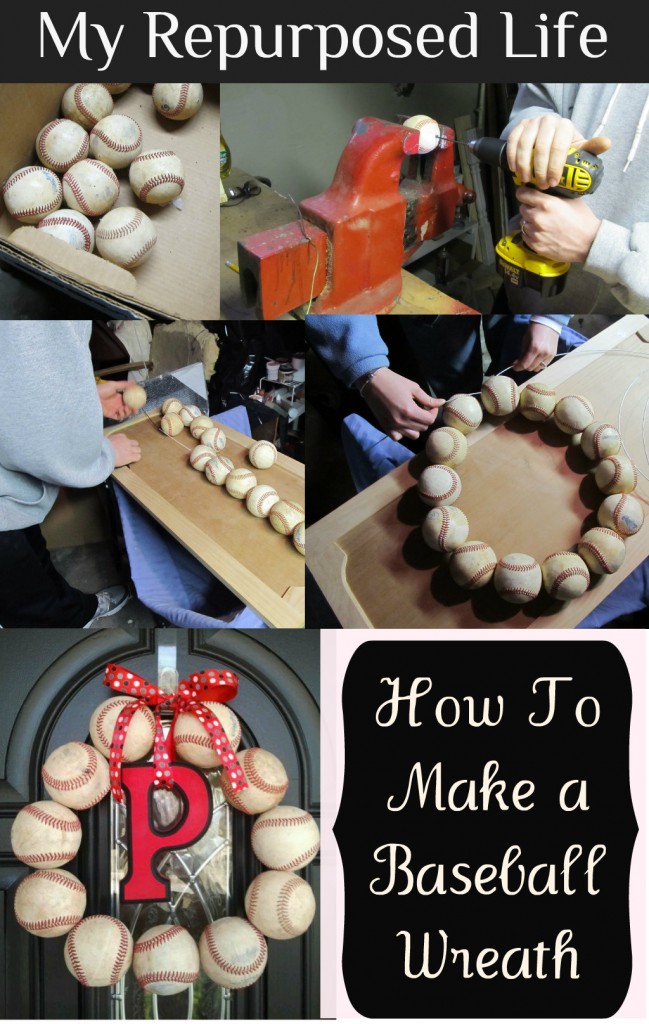 How to make a repurposed baseball wreath from old game balls 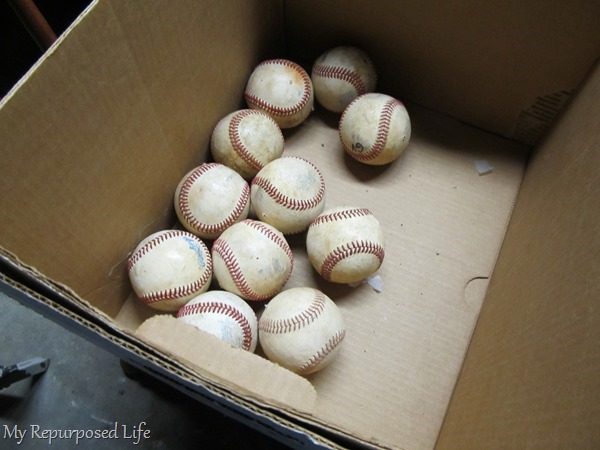 They came over recently with these baseballs to use my gynormous vice in the basement shop.

Carefully drill a hole in the middle of the baseball 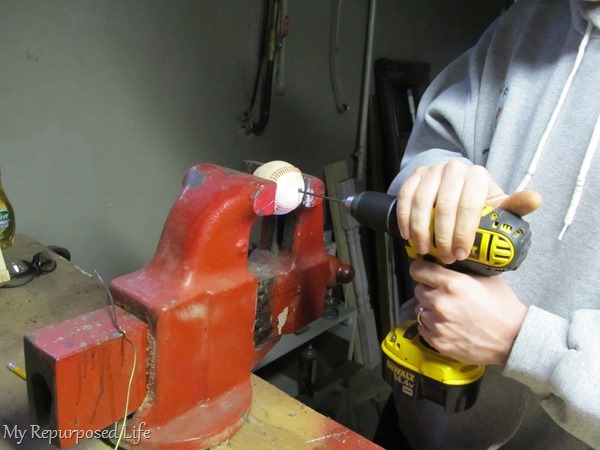 Bubba got right to work drilling through the repurposed baseballs. 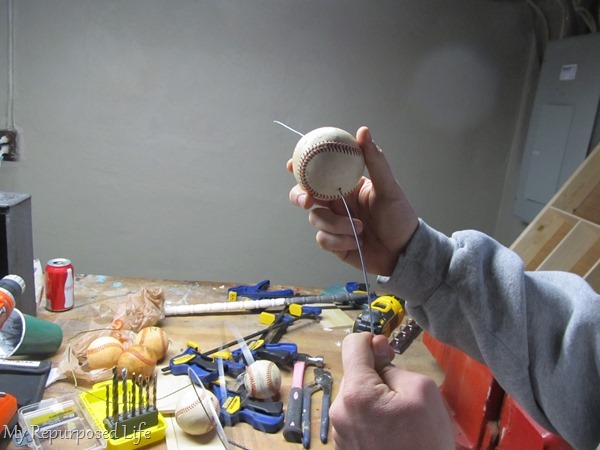 We tested to make sure the coat hanger would go through the middle. 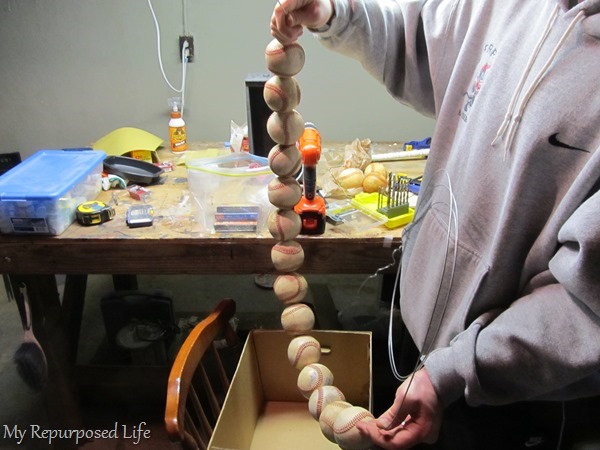 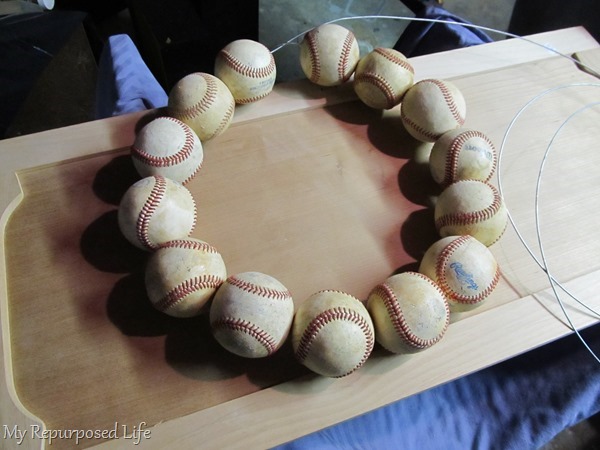 We started out trying to use 14 baseballs on a piece of wire I had in my stash.

The wire was not stiff enough, and the baseballs were too heavy. When  we held it up, it resembled an egg shape sphere.
Plan b: 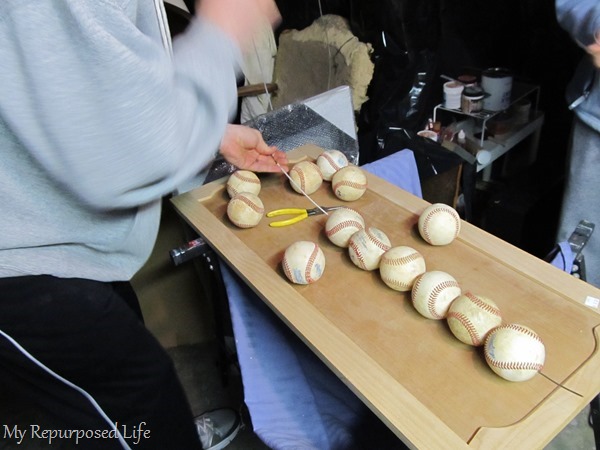 We worked on straightening out all the curlies of a wire coat hanger to get as much length as possible. Then we started threading the baseballs on again, trying to decide how many to use. After much debate, we all decided 11 was good, and that made everyone happy because that was Bubba’s number.

Fold wire to lock in baseballs 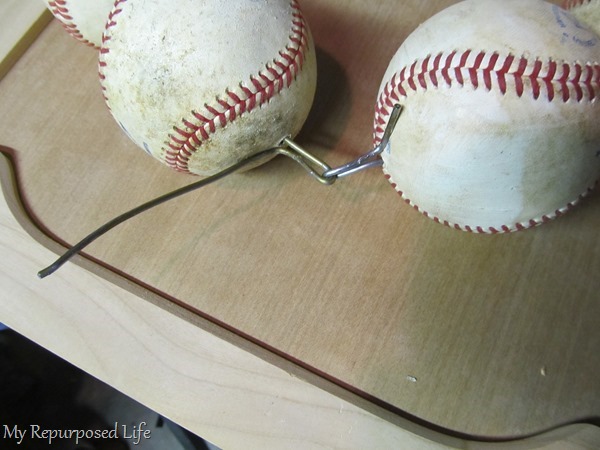 This is the wire, not the coat hanger, but I wanted to show you how we connected the two ends to make the repurposed baseball wreath. 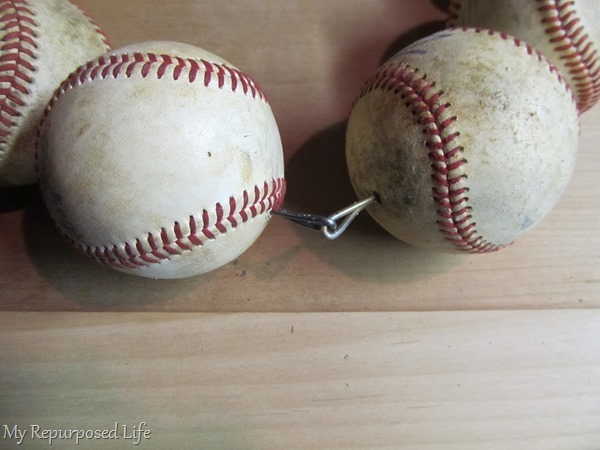 We clamped the ends down really well. 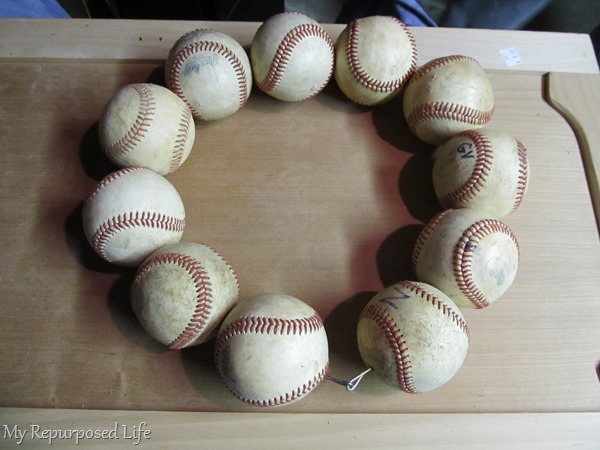 You can see that 11 baseballs worked. It’s perfectly round.

The “P” has a dual meaning. Bubba and Anna’s  last name begins with a P and the team Bubba coaches is the Panthers.

I recently visited them, and seeing the repurposed baseball wreath on their door made me smile! I love that I get to help them DIY. They have been in their house for several months now, and are busy making it a beautiful home. Anna has worked tirelessly painting their kitchen cupboards. She’s done a fabulous job on them, while Bubba patiently helped with re-installing all the hinges and NEW hardware. The “new” cabinets look terrific!
play ball!
gail
Related Content:
Baseball Grow Chart
Kid's Stool Baseball Theme
Duct Tape and Denim Baseball Stool
Pin
Share
Tweet
Share
4.1KShares
« Talk of the Town 167
Dollar store Solar Lights on Landscape Timbers »