×
Repurposed Furniture » Repurposed Bunk Bed Bench
Remember this bunk bed? My neighbor Marianne called me while I was in Nashville and told me there was a bunk bed in the garbage at her next door neighbor’s house. Marianne is the one I made the spindle table for, and she’s also the one I traded the rustic table for the bead board wallpaper. I went outside to start dismantling this. 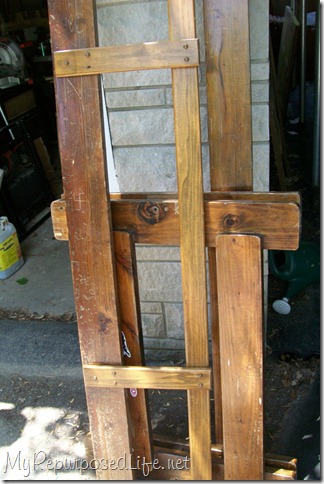 I took out all the screws and buttons. Some of the pieces were glued and I had to pry them apart. 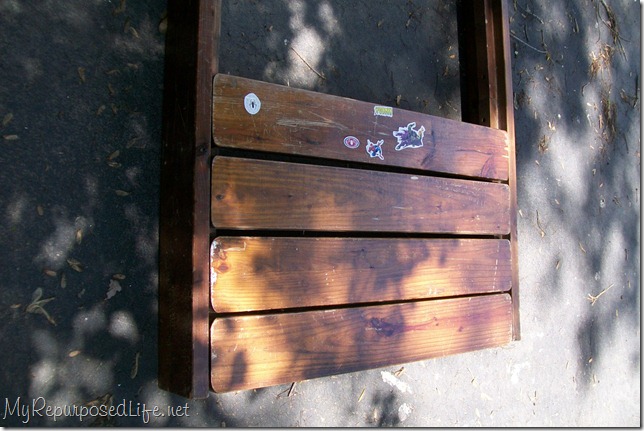 I was testing the waters, laying out the parts to see what this bunk bed wanted to be. Maybe a table, or a bench? There were four boards that matched, and two boards that those four are laying on. 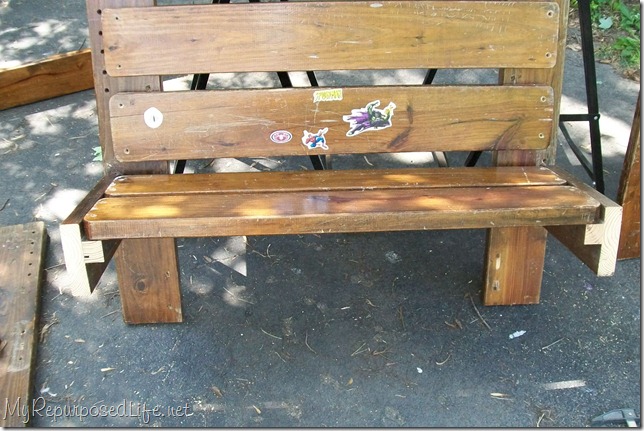 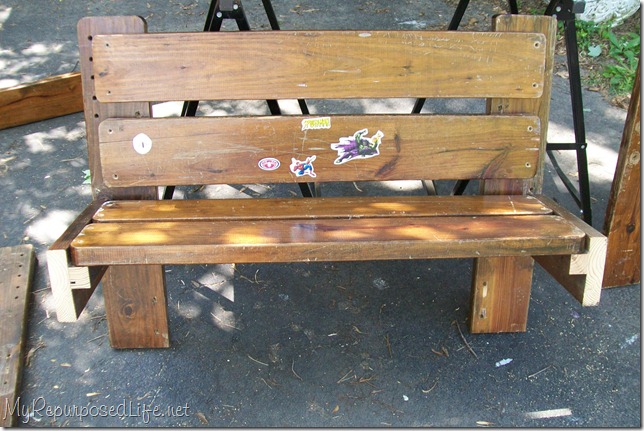 If I knew what the parts of the repurposed bunk bed were called, it would be a lot easier to explain how I made this. 🙂   In this picture it is still missing the front legs,  but I guess you already figured that out! 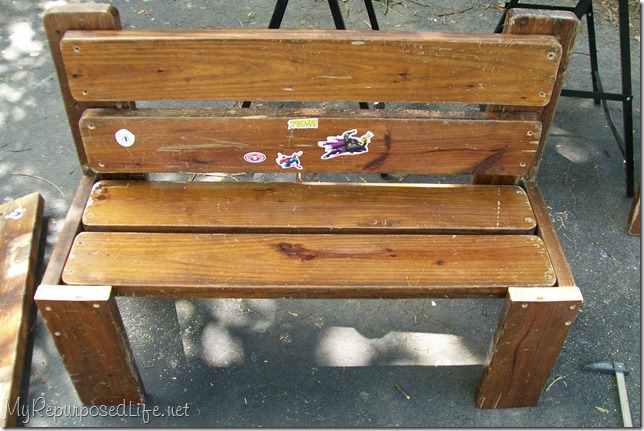 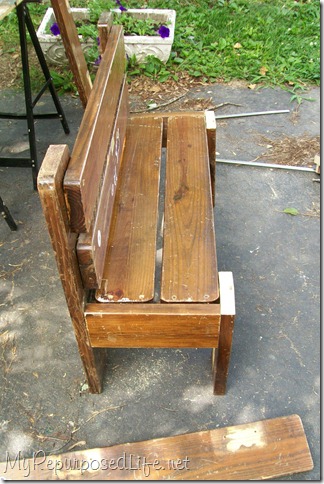 I made this bench for the children of a good friend of mine. Don’t let it’s size fool you! It is very heavy, and very sturdy. It held up to myself and my friend, neither of us being Twiggy’s. This picture makes it look squatty but it’s not. Don’t look at the very sad petunias in the background. Too much rain, and not enough sun! 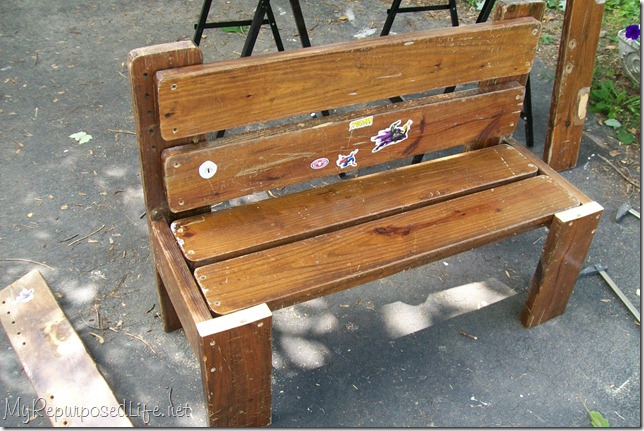 Luckily the stickers were lick and stick, so they were easily removed. I gave it a sanding, and some primer. (see that other board there? Look at ALL those holes. Who knew a bunk bed had so many bolts in it?) 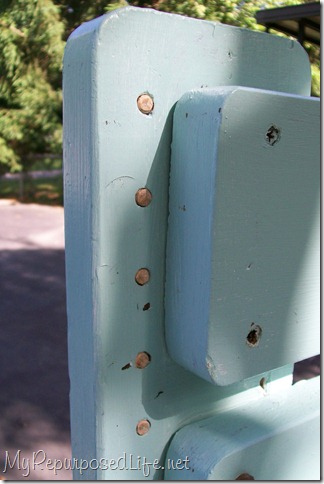 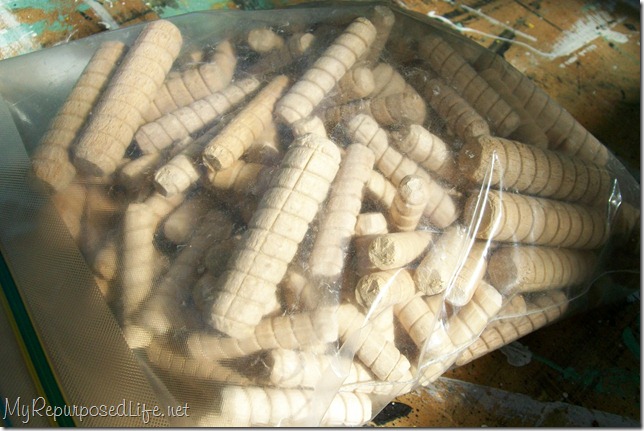 It’s nice to be a collector of junk! 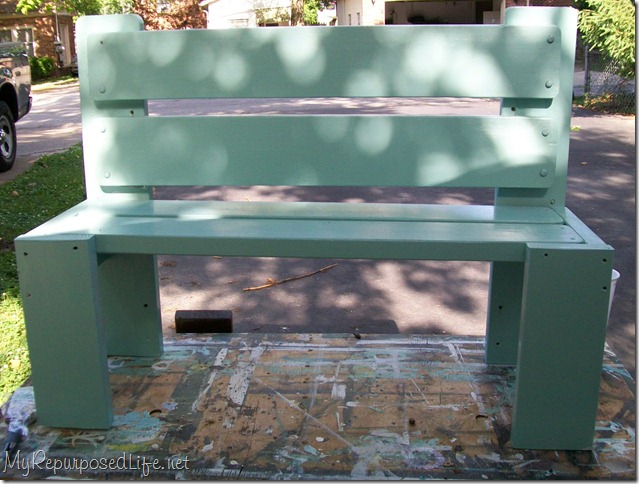 Look at all those holes! As if it didn’t have enough holes in it already, I had to add more holes to make it all come together. 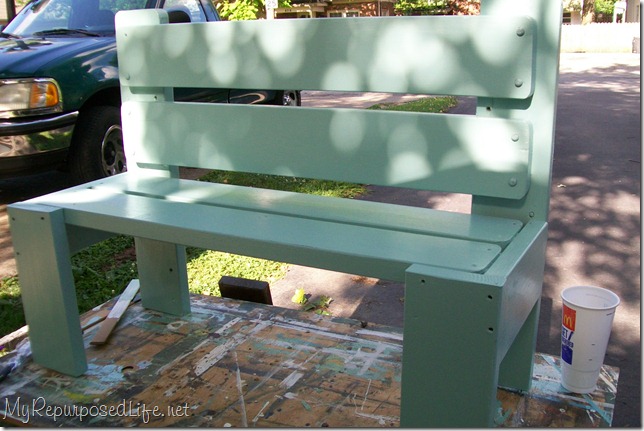 It is so much easier to paint things up on a table! I turned it upside down first to get the underneath. I used some oops exterior paint on it. Mickey D’s cup full of ice water! It’s been very hot here! 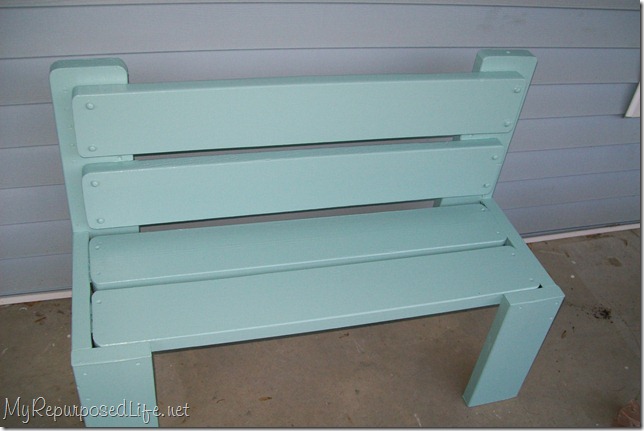 Here it sits on the porch next door, out of the weather until the paint cures. I tried to patch all the holes, but seriously, it looked like someone had pulverized it with a shotgun! 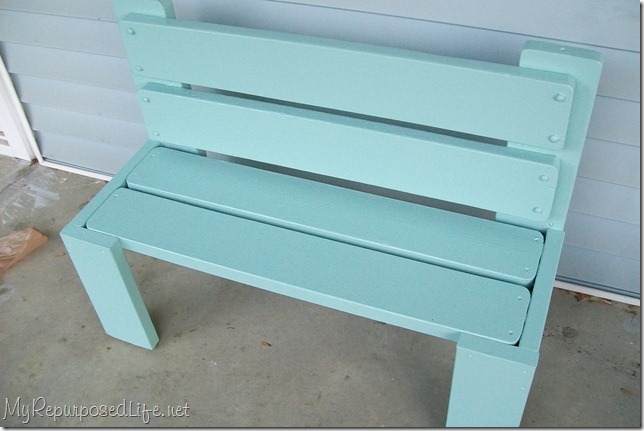 I will be taking it to the kids later this week. I hope they like having their own place to sit outside in their huge shaded yard. 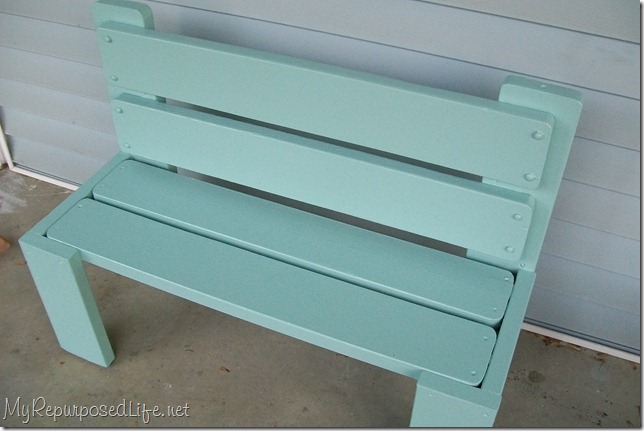 It’s no longer a bunk bed. It’s not my best project ever, but I didn’t have a lot to work with! However, I did save another piece of furniture from a fate worse than death! 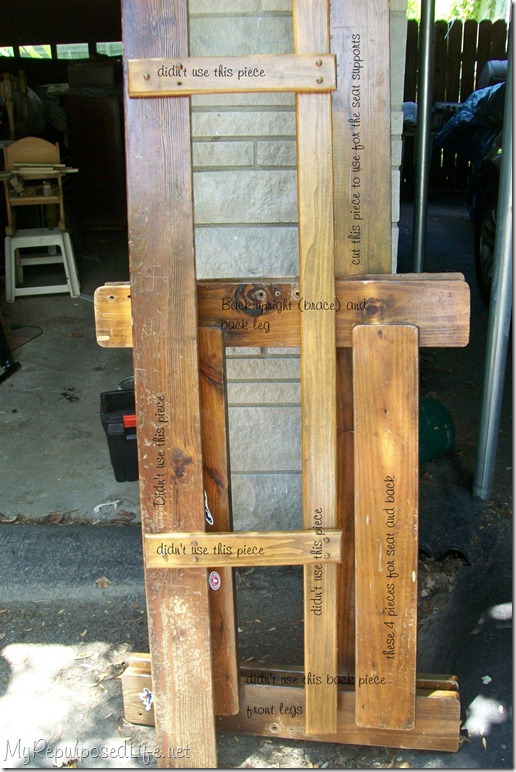 So basically I have one very long piece (with no holes) two shorter pieces with LOTS of holes, and the three skinny pieces left over. I hope to be able to do something with them. Any ideas? Would you have even bothered? What do you think you would have made out of it? Did I take the easy way out?
Still time to vote for my project over at the DIY Club Inc if you haven’t already. And if you have, thanks a bunch!
gail