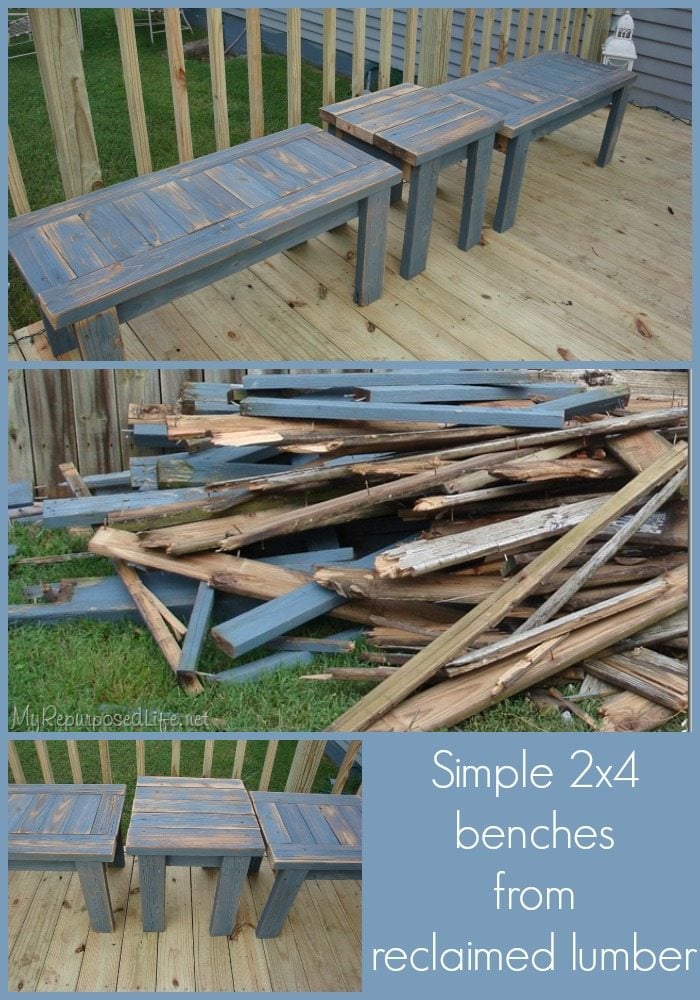 I'm going to show you how to make a simple bench made from reclaimed 2x4's. It really is easier than you think!
Be sure to see more great projects from this month's Power Tool Challenge at the bottom of this post. 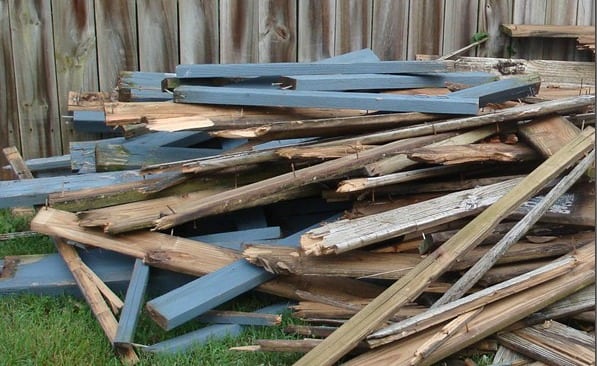 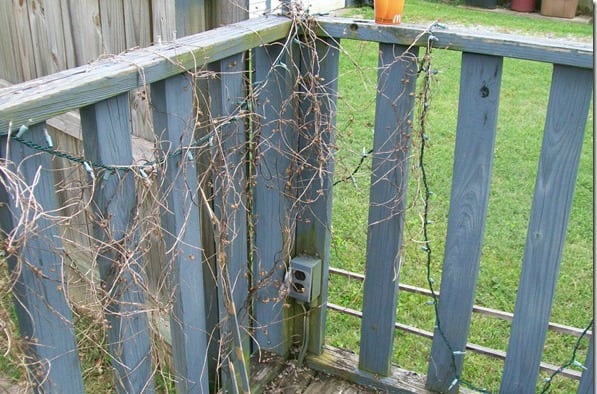 The only lumber that was salvageable were the vertical 2x4’s that made up the spindles. See those thin little horizontal pieces? Those were put up by yours truly years ago to keep this little fella in . . . 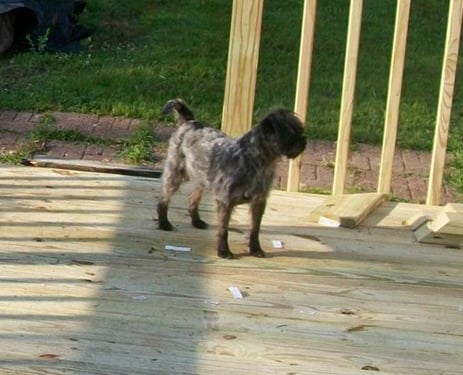 How to construct a simple bench out of reclaimed 2x4 lumber 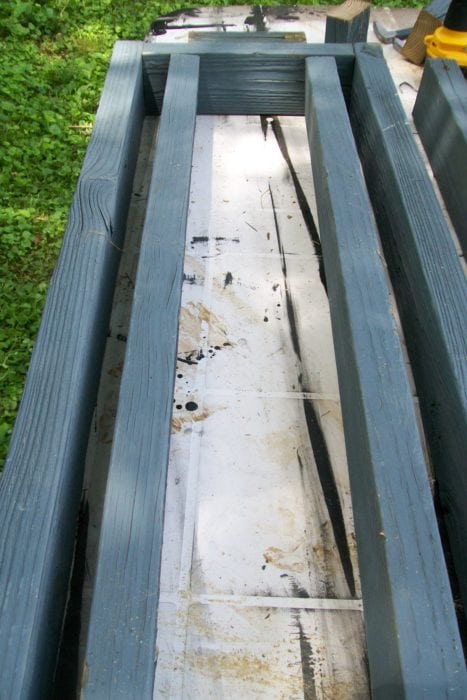 This is the simple construction of these little benches. I made a box as long as the longest board. The end pieces were made so that the simple bench would be about 14 inches wide.

If you're looking for really easy 2x4 stools, check out this tutorial for 2x4 benches and stools 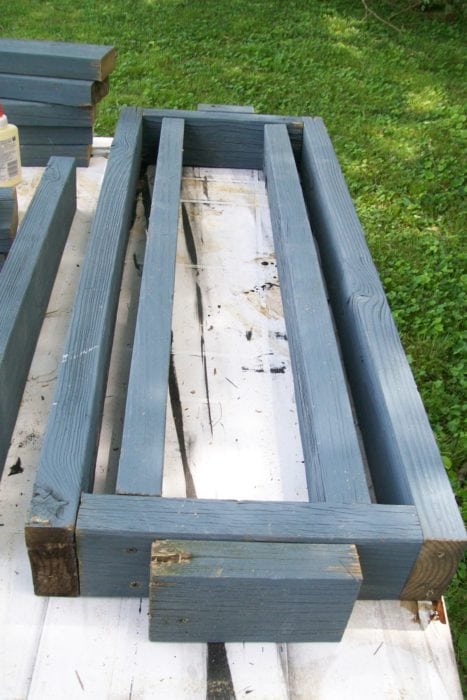 The little scrap piece at the end is a guide. I made the simple bench so that it would have an overhang the width of a 2x4 thickness. While I had my box laid out, I put a 2x4 on each of the 4 sides to measure to see if everything was going to fit correctly. 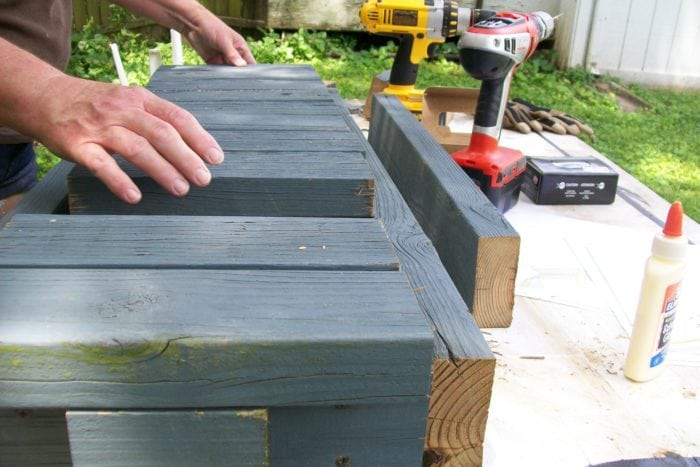 The seat slats are 11 inches long. You can see here that it is resting on the scrap piece, allowing the overhang I wanted. 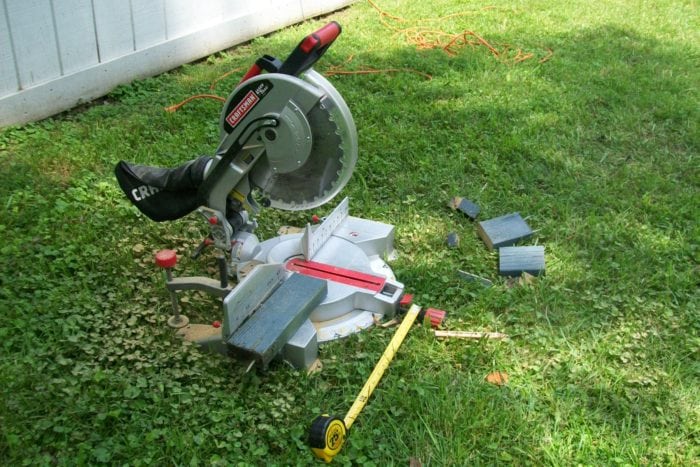 Don't be discouraged if you don't have lots of workbench space. It's more difficult to work on the ground, but in a pinch it works! 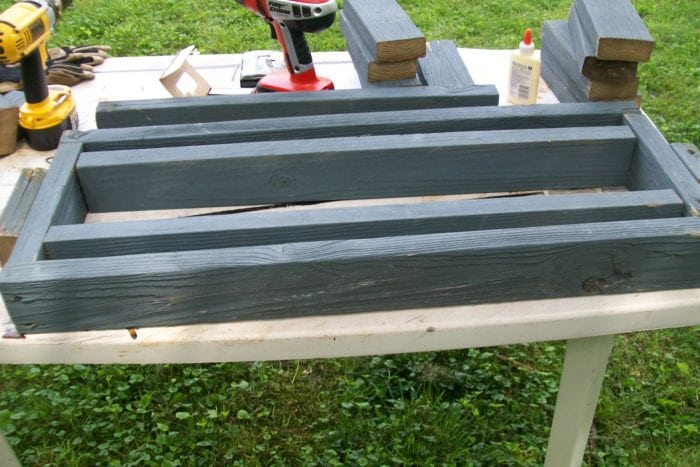 The box was constructed with screws and wood glue. I also used glue and screws on the inside brace pieces. A countersink  bit was not needed because typically 2x4’s are soft enough to sink the screws. However I did make pilot holes for EVERY screw. The wood was brittle and I didn’t want to take any chances of splitting it. That is why you see 2 drills. One was manned with a drill bit, the other with a screw bit. That makes things go so much faster. If you only  have one drill, I suggest investing in a second one. Pawn shops are great places to shop for small power tools. 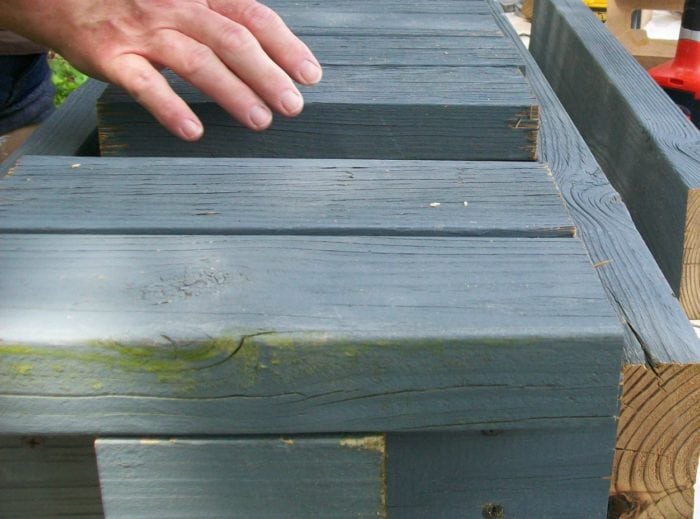 All the slats were attached first. I screwed the end one on, then used glue and my nail gun to attach the rest of the slats. When I got to the last one (the other end) I used screws again. Nail guns are great for a temporary hold until you can secure the wood permanently with screws.

How to join two boards with a 45° angle 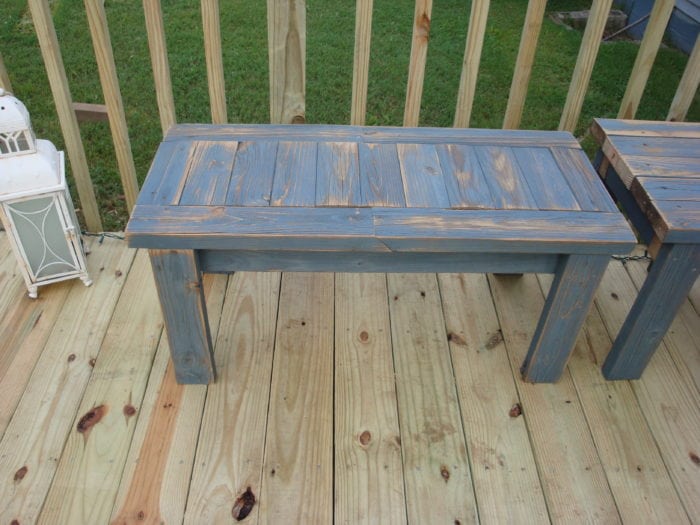 After attaching all the slats, I worked on the side pieces to box in the slats of the simple 2x4 bench.

Because I used the longest board to make the box, when it came time to “box” the slats in, I didn’t have a board long enough to have “overhang”. I made a 45 degree cut on two boards. Then on one board I made the straight cut. After I had that laid out, I then measured where the other straight cut needed to be made on the other board.
These boards laid directly on top of the outside board (of the box). That means they overhang the thickness of a 2x4 all the way around. I used screws on these boards also. 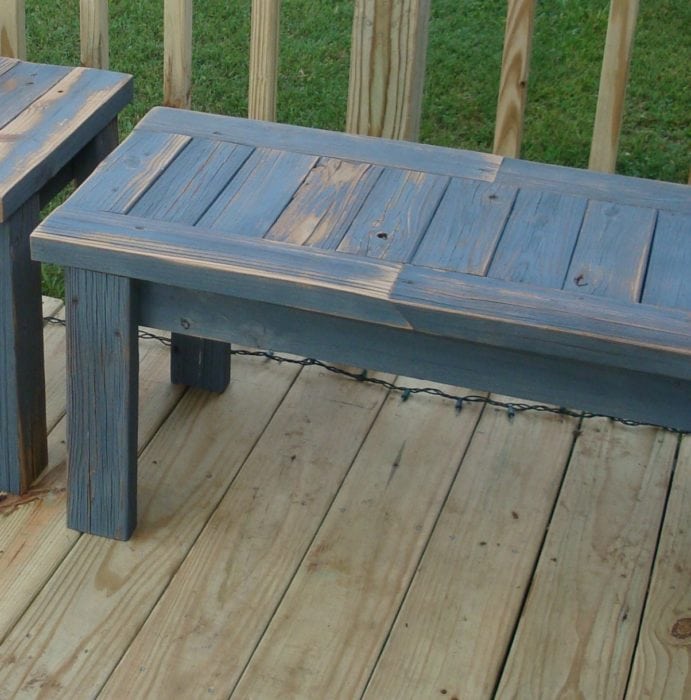 After I added both side boards, I attached the legs. Because there is an overhang, the legs fit perfectly under the side boards. I used screws on the legs. These benches are VERY heavy. I can move one by myself, but to carry one from the very back of the yard to the deck was nearly impossible to do by myself!

Make a matching table for your simple benches 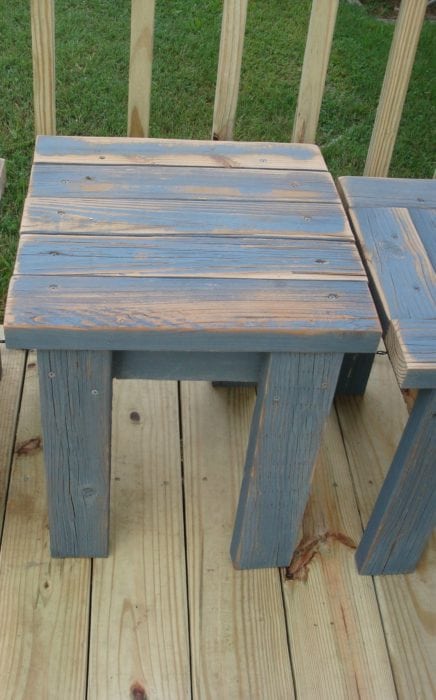 I am not a math whiz! I came up with the simplest way to make this table! Jamie wanted it to be a square, the same size as the bench. I cut enough boards to make it that size. Then imagine  laying all of those boards down  on a table (upside down), laying those small scraps on each of the four sides. That is what I did, then I measured the inside dimensions to figure out what size box I needed to make. Remember, I needed the overhang to allow the legs to fit perfectly on each side. 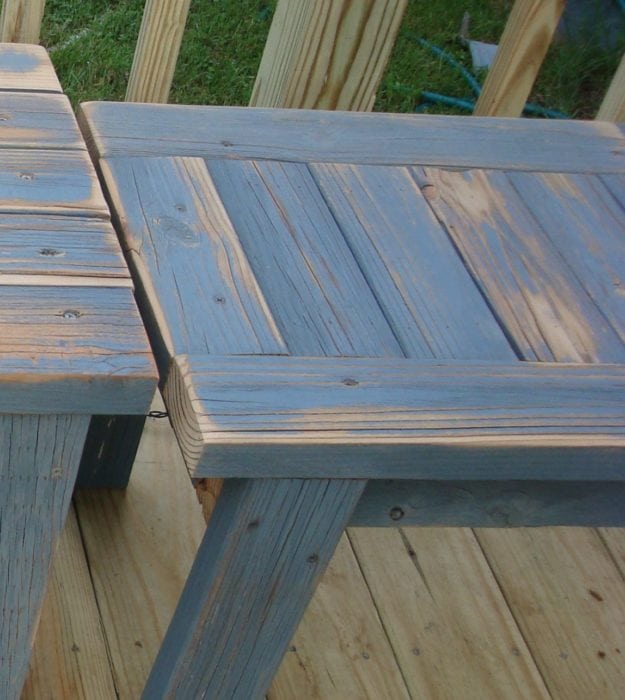 Being reclaimed deck wood, there were definitely some rough places. Jamie used my orbital sander to smooth them out some. I love the way these benches and that little table turned out! Blue is my favorite color, and I love how aged they look. I also love the fact that my daughter Jamie now has some of her original deck. Of course we did not build the original deck, it was there when she bought the house.
Check out these awesome woodworking tutorials from my friends 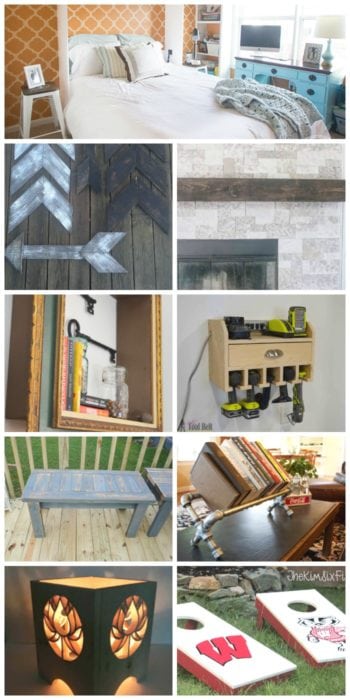