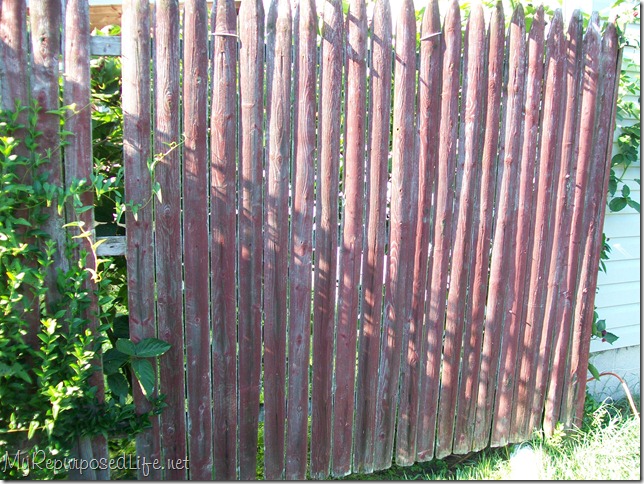 My friend Regina planned to replace her privacy fence with a new fence. That was several weeks ago. I asked her if I could have her old fence. She was shocked! She couldn’t imagine what on earth I would want with her old fence. Well as all us junkers know, old, aged fencing is a premium find! I knew exactly what I wanted to do with it. Fast forward several weeks of weather hotter than blue blazes (my mom’s old saying). The 4th of July quickly approaching, and the weather cooling a bit, I asked her if I could come start taking her fence apart. Since I originally asked for the fence she and her husband have decided they are going to put an addition on the back of their house! A master bath and bedroom! How awesome for her. 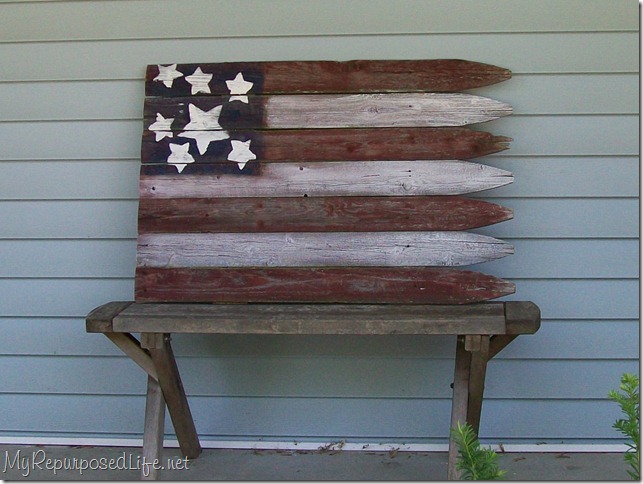 I made this in less than an hour on Thursday. These 7 planks were cut down to about 36 inches. The 7 planks added up to about 24 inches in height. I used two of the pieces left over to nail the planks together on the back. 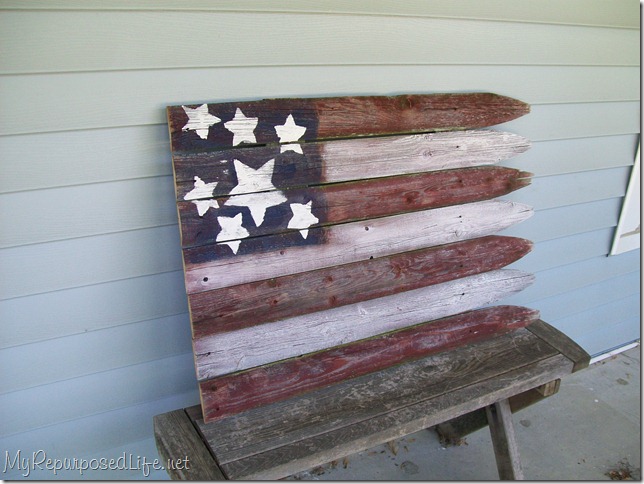 The darkest boards were best for the red stripes, and the most faded boards were used for the white stripes. 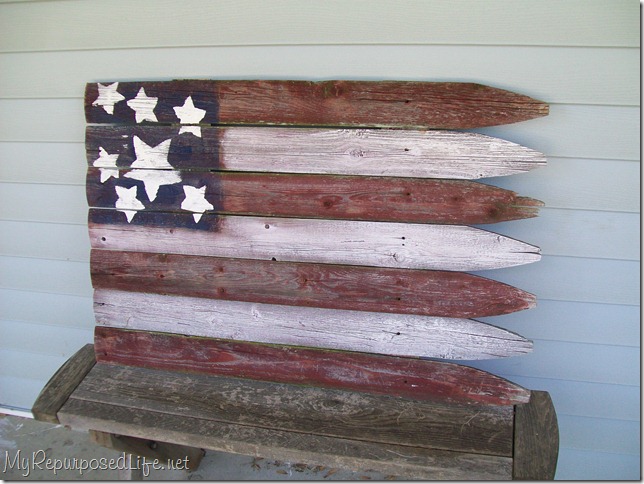 I made a star template by laying a piece of printer paper on my computer monitor and tracing a star pattern I found by doing a Google image search. After tracing the star on the paper, I cut the shape out of a piece of cardstock. 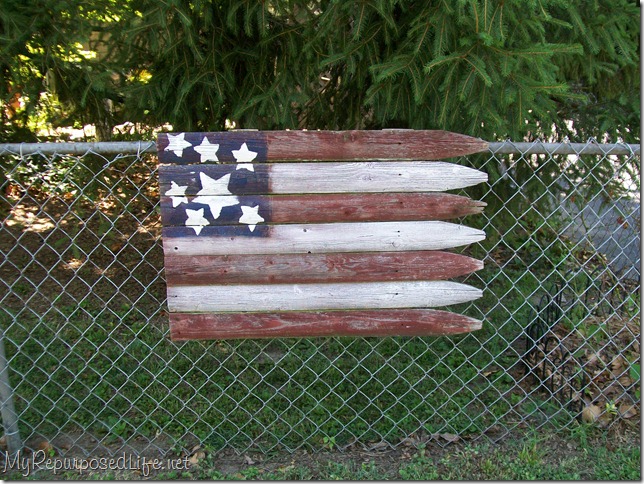 I very randomly placed the stars on the blue square. This was a temporary spot to take a couple of pictures. I screwed two screws into the back braces, leaving them raised enough to “catch” the fence to hold it.
I actually ended up moving it to a prettier place in the yard, still on the fence though. It was either hang it on the fence or “stake” it in the yard. While I was working on securing it to the fence with zip ties, and man and woman drove by. His window was down and he slowed down to comment on my new artwork. He said it was “very nice”.
I suppose I pretty much copied Rose’s flag. I don’t believe she has ever shown it on her blog. But because we’ve been friends for a couple of years, I have a folder that I used to save pictures of her projects. There have been flags all over blogland over the last couple of weeks, but Rose made hers several years ago. Thanks girl for the inspiration!
edited to add:  Rose gave me the link for her flag, you can see it by clicking flag in the above paragraph.
Okay, so you probably noticed today is Friday and there is not a Featured Followers Friday feature. I was so anxious to show you my new flag, that I decided to delay this weeks feature till next week.
On another note, I went to the dr today for a follow up appt. We discussed all the details of the episode that landed me at the ER a couple of weeks ago. She pretty much thinks I overdid myself in the heat, possibly sweating out all the potassium in my body. Low potassium can give muscle cramps, and the heart is a muscle. There really is no other explanation. It had happened several other times over the few weeks before that. I had worked  very hard outdoors in the extreme heat. I have no recollection if the pain coincided with those days. It has not happened since I went to the hospital. The doctor recommends that I drink Gatorade while I work in extreme temps. Lesson learned!
I hope you all have a great weekend, and a very happy and safe Independence Day!
gail
Pin It