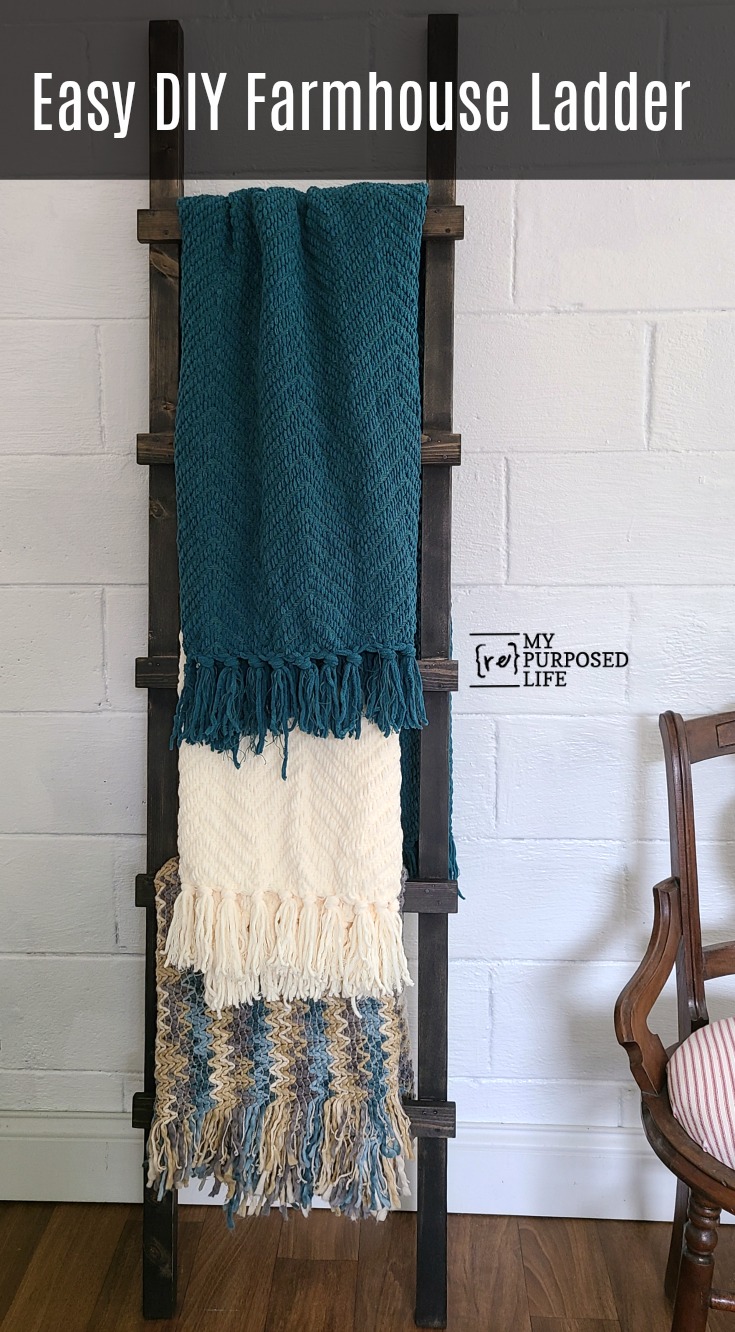 I didn’t actually plan to build a farmhouse ladder. But when I finished my Flour Sack Towels last week, I went looking for my craft display ladder for photographing the towels. It wasn’t there! Did I sell it? Too bad, the towels would have looked so cute on it with all the small spindle rungs.

So, I needed some sort of easy ladder project. And, boy do I have the best farmhouse ladder tutorial to share with you!

Let’s see how easy this farmhouse ladder is to make!

Do not be intimidated by my project, I’ll be sharing an alternate way for you to make your farmhouse ladder without this scary table saw.

I am a use what you have kind of gal. Because I’m still safe at home because of Covid 19, I haven’t been frequenting The Home Depot as much as I would LOVE to!

I started with an 8’ 2x4, and a shorter 1x4 (scrap board). Both of these were ripped exactly in half on the table saw.

Sanding really well is an absolute must! You can see this 2x4 had grooves in it. I actually sanded my boards before ripping them to make it easier.

Beginning with the 60 grit, then moving to the 220 grit to get a nice finish on the boards worked really well.

Before cutting the boards to the length I wanted, I trimmed off the mill end of the boards.

The board on top has been sanded to remove the sharp edge on all sides. I wanted to make sure that whatever is hanging on the farmhouse ladder has nice edges rounded over.

This is the design stage of the farmhouse ladder rungs. I was trying to figure out the best layout for the rungs. This is when I decided that 5 rungs would work best.

Mark Side Rails for Rung Placement

I marked my side rails with a combination square using small marks so they wouldn’t be seen when I stained the lumber. An Irwin quick clamp held the boards together.

In order to assemble the farmhouse ladder, I needed a tape measure, a kreg multi-tool , Gorilla Wood Glue, and a nail gun.

Using a dab of wood glue, and one brad nail on each side, I added the top rung, then the bottom rung.

This handy multi-tool is so helpful for getting the overhang of the rungs equal. You may choose to make your farmhouse ladder with the rungs flush with the side rails.

Does stain cover wood glue? No, it does not—be sure to wipe away any excess glue. You can see one brad nail holds the rungs until the wood glue sets up.

Allow Wood Glue to Set Up

After allowing the wood glue to set up, it was time to add the nails.

Of course, you could use wood screws for your farmhouse ladder assembly, but I chose to use nails. I wanted a more rustic look for my project.

Looking back, I wish I had paid more attention to where I placed the brad nails so they would be hidden by the larger nails. Don’t you love how the nails add to the ladder?

This is where I keep it real. As I finished the assembly, I noticed the ladder was a little “off”. My neighbor Rodney walked over and grabbed my rusty old square. Well, looky there! Even though I measured down from the top on each side rail, and up from the bottom, it’s not square.

It’s a little difficult to explain, but Rodney stood the ladder up and rested it on one rail and sort of gave it a shove.

Much better! If you don’t have a square, you can use a piece of plywood or something similar.

Time for Paint or Stain

A dark ebony stain seemed perfect for this project.

Let’s take a close look of the stain and the nails! I colored the head of the nails with a sharpie to make them stand out a little more. Isn’t it scrumptious?

It is perfect for displaying the Flour Sack Towels.

All of the edges are very smooth and don’t snag the throws at all.

The farmhouse ladder is already in The Sugar Shack. It was really hard for me not to paint it, but I’m glad I didn’t.

1x3 is sometimes called a furring strip. Using this cut list will allow you to only cut to length. You won’t need to rip the boards like I did.

Will you make one? Do you think you will paint it or stain it?