Benches are one of my favorite things, besides crates, I LOVE crates too. This bench was sitting out with someone's garbage in the rain, until I spotted it while driving by....

My family is finally getting past the shame and embarrassment phase of my trash digging, in fact this project was picked out of the trash by my oldest son, I didn't even have to get out of the car! Yep, I am training them right! 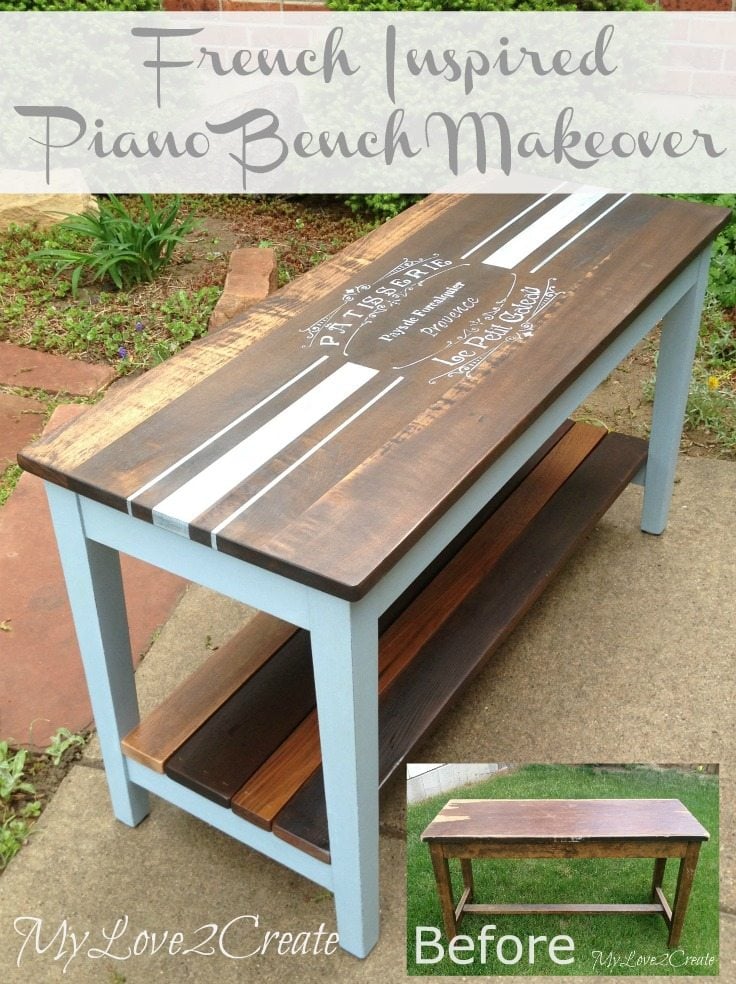 Of course that was months ago, and the sad lonely discarded piano bench has been residing in my basement ever since. Let's get a better look at the before. 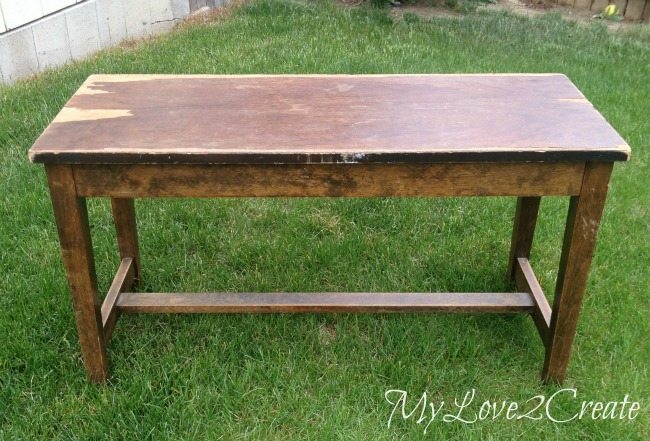 It was structurally sound and the lid worked great, just had some top veneer issues. 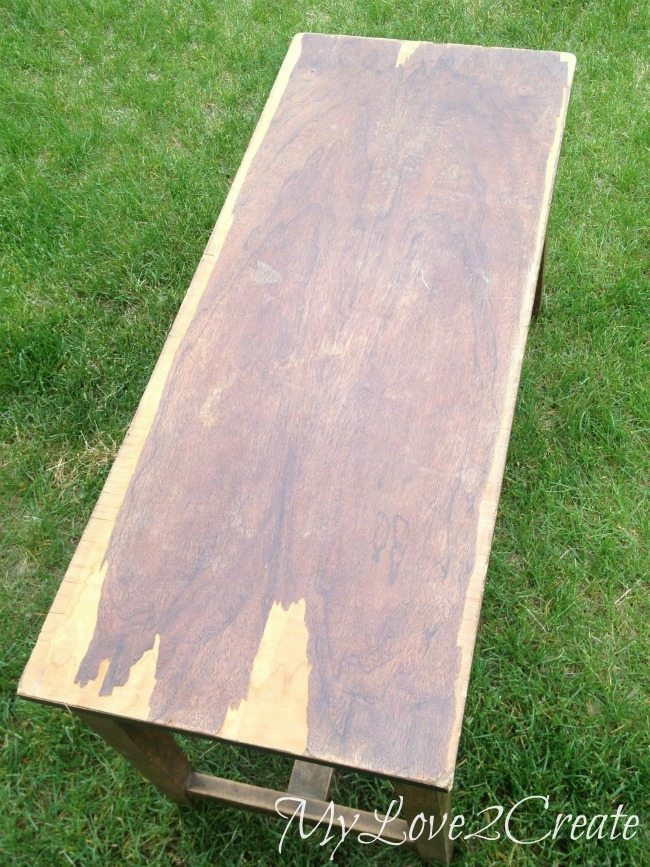 Yea, not patching that mess up! I have read that good wood mostly resides under veneer, so I commenced in finding out.

I grabbed some tools, a spackle scraper, a mallet, and a crowbar, and set to work. The veneer was peeling pretty good on all the edges so I easily worked the plastic scraper under and then pounded with the mallet. I kept the scraper level with the bench and It really helped to pull up the veneer in big chunks.

I also used a crow bar to help lift it up too. About a 20 minutes later I was left with some stubborn spots that weren't budging. 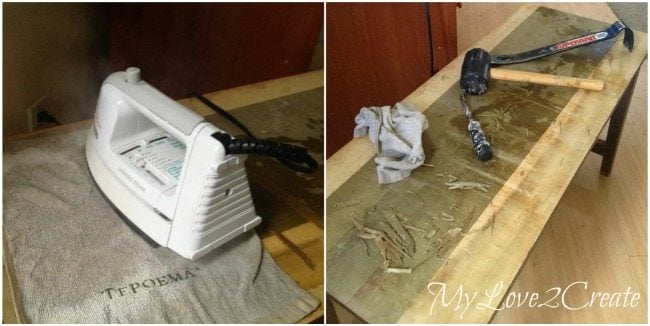 With a little google search I found that heat and water help, so I grabbed an iron and a damp cloth. I sprayed water on all the left over spots of veneer and let it sit while the iron warmed up. Then I placed the damp cloth over the spots and ironed away. This also brought the glue up too, which was sticky. It  did help to loosen the veneer, but I still had to do some prying and scraping to get the rest, but it wasn't too bad. 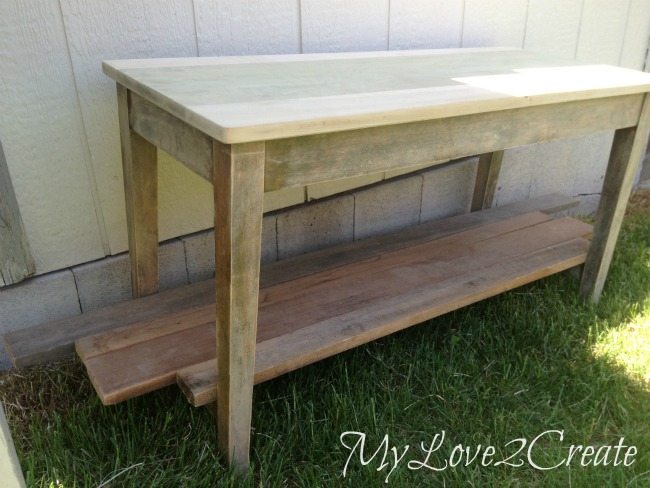 Next, I sanded the top down with 60 grit, and then followed with 150 grit sandpaper until it was nice and smooth. I also decided to make a shelf for the bottom and so I grabbed some of my free scrap boards and found 4 that fit. I cut them to size and sanded them smooth. 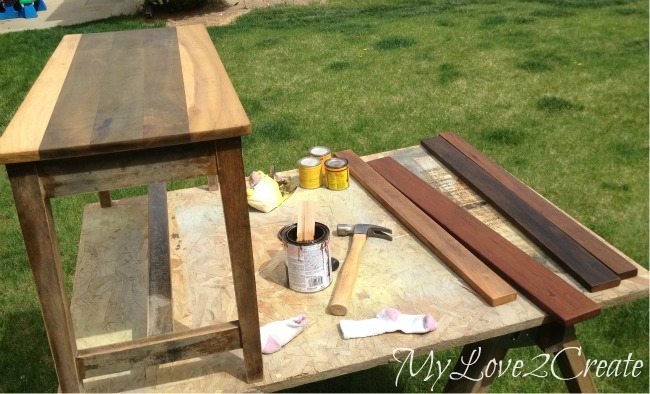 Since all the wood was different, I thought it would be cool to keep the contrast and stain them all with natural stain. Here they are pre wood conditioned and stained natural. The top of the bench was super cool! I loved it and was planning on keeping it as is. But of course I had to mess with it, because the wood colors clashed a too much with the bottom shelf boards. Ugh! So I stained it with Rusteoluem's Kona and I was NOT happy with how it took away the stripe look....Oh well, to late now! I also took the largest bottom shelf board and used the same dark stain on it. I hate it when I mess with things too much...anyway it has a happy ending, thank goodness! 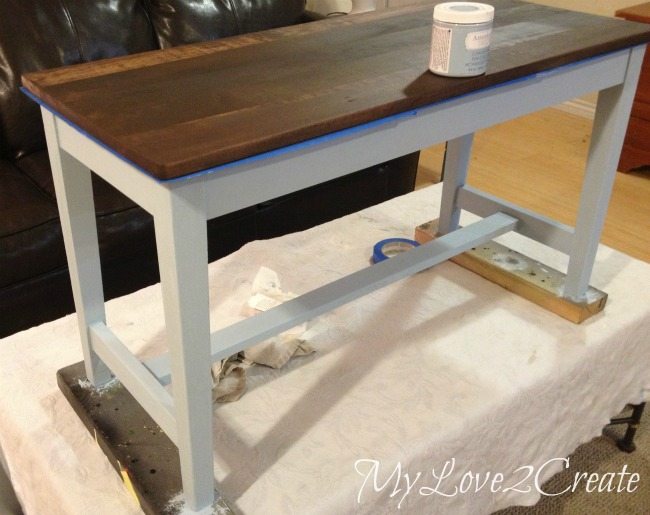 I had a chance to attend SNAP, a blogging conference, a few weeks ago and received some awesome stuff to try out. The first being chalk paint. This was my first time using it. I did two coats of Americana Decor Serene Chalky Finish. It was super thick, but went on well. 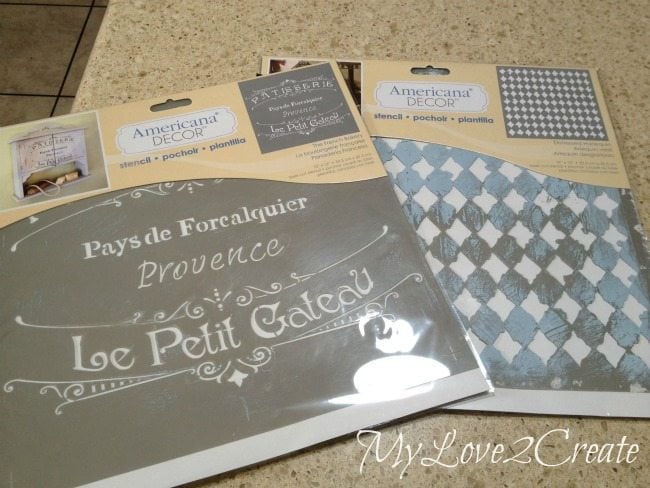 I also wanted to try out these stencils I had gotten and I was so excited to have a french theme! You can buy these products at Home depot. 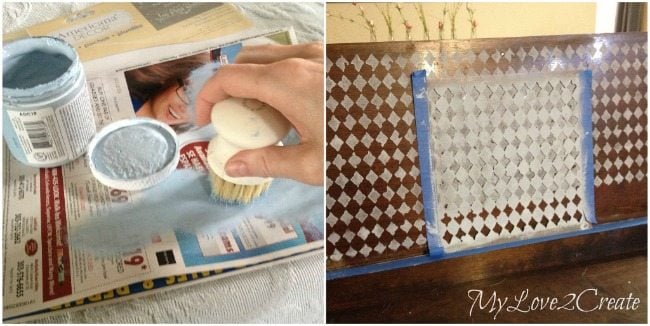 I thought it would be fun to have a pattern on the inside of the lid so I used this stencil to create it. I was impressed with the stencil quality (I am not sponsored I just am saying it like it is, in my own opinion) I used this brush and put a small amount of paint on it, rubbed most of it off in a circular motion on some newspaper, then used the same circular motion directly on the stencil with what was left on the brush. I had zero bleeding, which made me very happy! 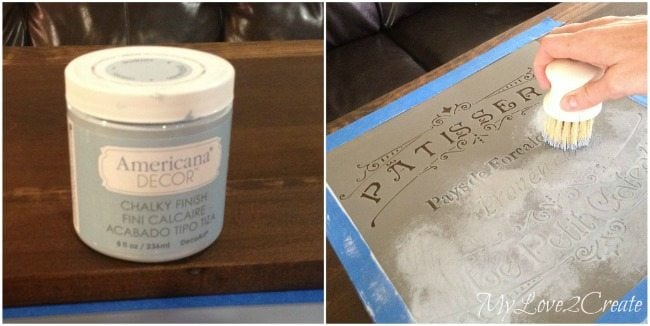 For the next stencil I centered and taped it onto the top of the bench and used the same method to stencil the french design. Again no bleeding, which I was worried about on the stained wood top, phew! I think the most important thing to remember is to load and unload your brush, so you have very little paint left to stencil with. This 8 oz. jar of paint went really far, I only used half of it for the whole bench.

In keeping with the french theme, I couldn't resist grain sack stripes, I LOVE THEM! After I measured and taped my lines, I firmly ran the tape roll over all the tape to seal it really well, this helps to get those crisp clean lines (a trick I learned from Mandi at Vintage Revivals). It really works guys, you can see another example in my How to Paint a Subfloor post. 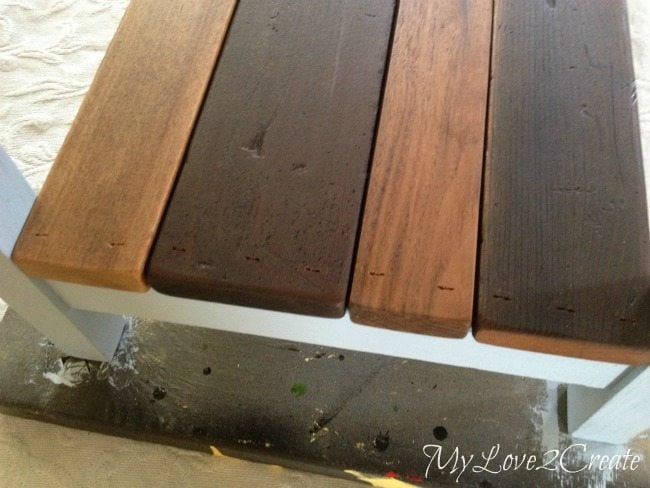 I glued and nailed the bottom shelf boards on, then sanded/distressed the painted areas, stenciled parts included. Since I have never worked with chalk paint and was worried I would take off too much paint I used 400 grit, but I am thinking a 200 would have been fine. I was going to use wax to seal it, but ended up using polyarylic. 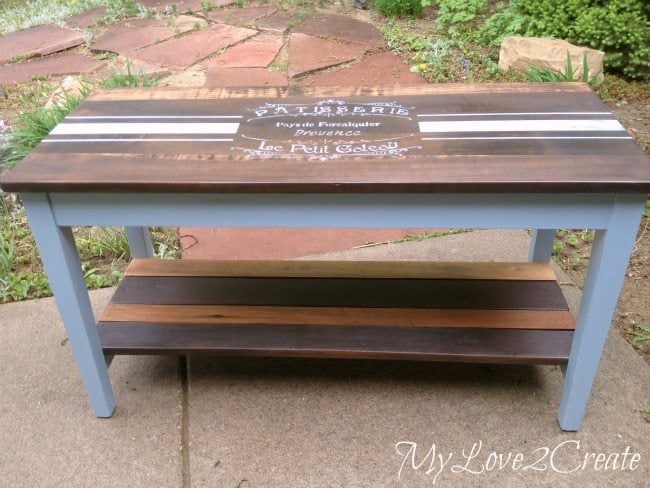 And I was all done!! I am very happy with the final result, even if I did mess up with the top stain. 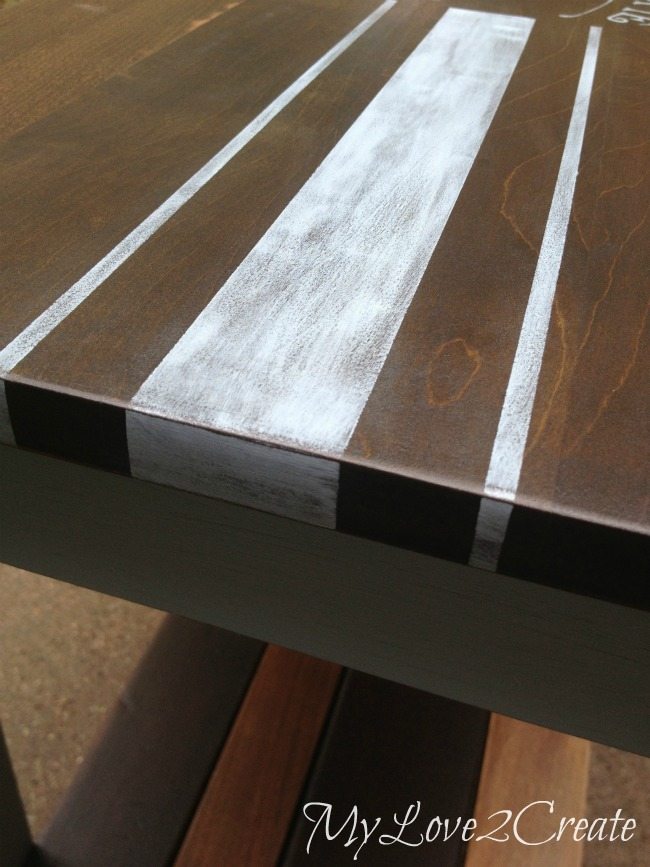 I really liked the chalk paint, I will have to use it more often. These stripes are so fun! 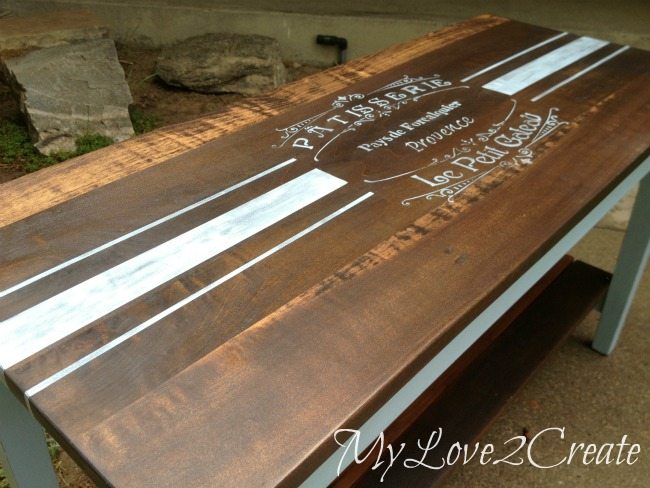 It amazes me that they hide such fun wood under veneer, it has such character, why use veneer at all? 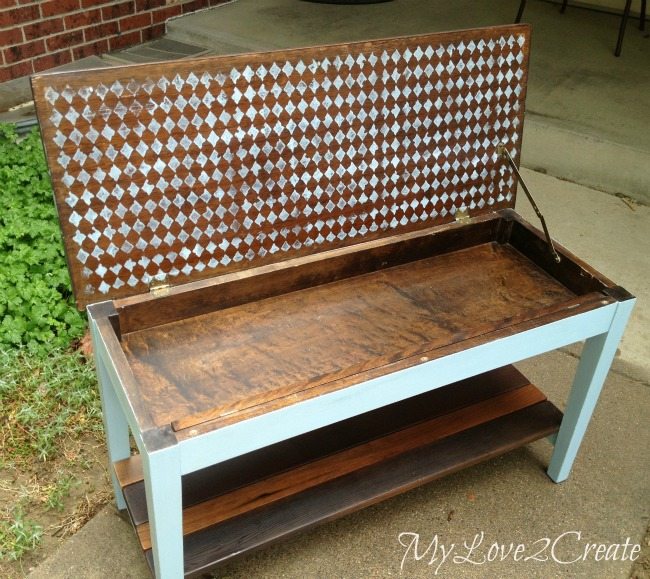 The inside is a little busy, but hey it was fun for me to try out that stencil, I kinda like it too. 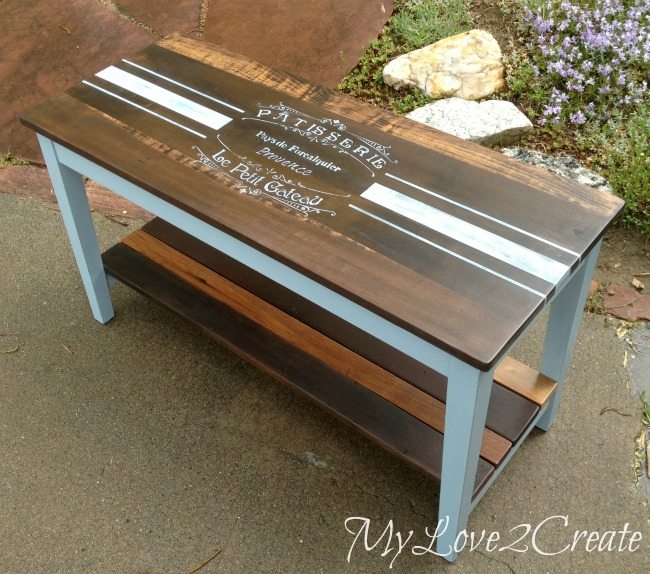 I only had a few minutes when the sun came out that I could snap some pictures before it started raining again. 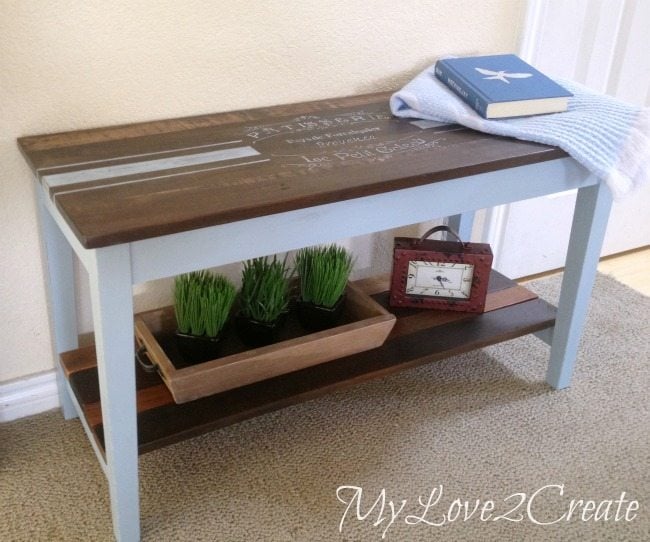 Right now this bench is hanging out in my entryway, I am sure I will find a good home for it!
If this was your bench where would you put it?
Hugs,
Mindi
see more of Mindi's posts on MRL below:
[categorythumbnaillist 274]
Pin
Share
Tweet
Share