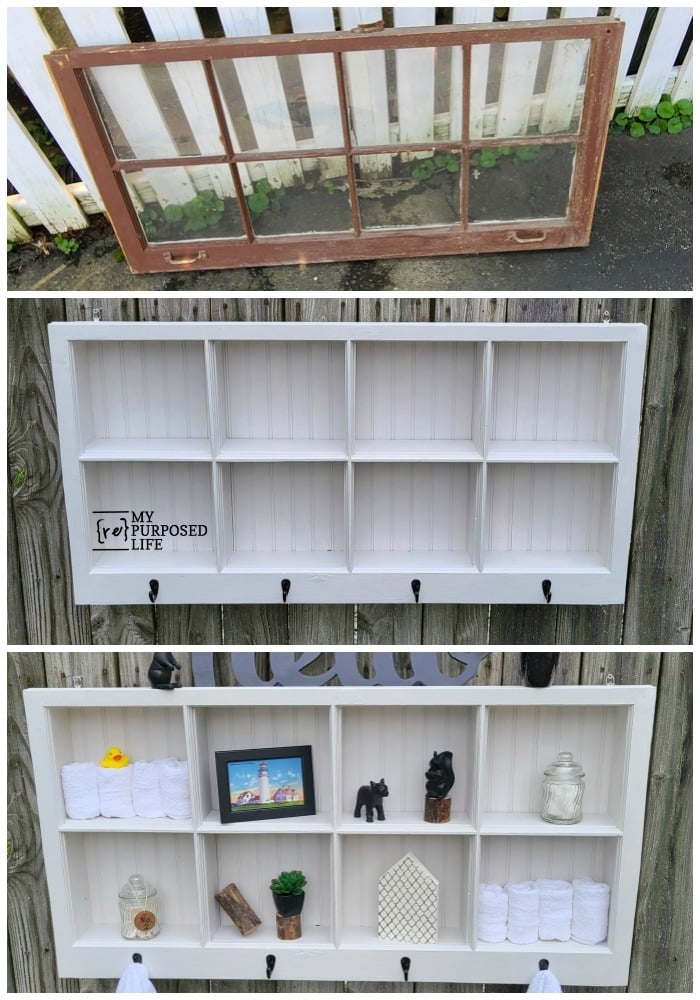 I am calling this a shadow box hook shelf because it has all of those functions! What did I use to make it? A repurposed window, lumber and bead board. The cubbies can hold lots of items, the top of the shelf can hold knick-knacks, and the hooks are very functional as well!

How To: Shadow Box Hook Shelf 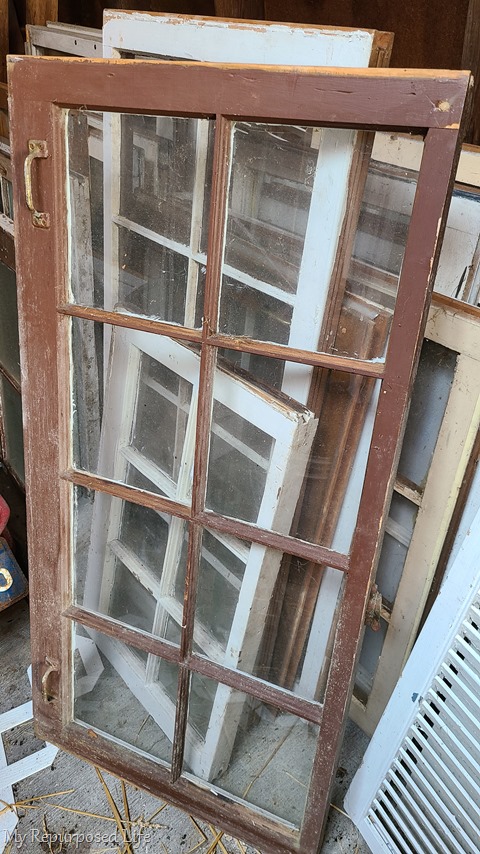 I keep a stash of old windows on hand at all times. They are stored in the wood shed. I dug through the bunch and found this window that I felt would be perfect for the shadow box hook shelf. Rarely do I plan these things out, but I knew that I wanted this to resemble a shadow box—not a cabinet. I also wanted it to be functional and have coat hooks.

Let’s see how it all came together: 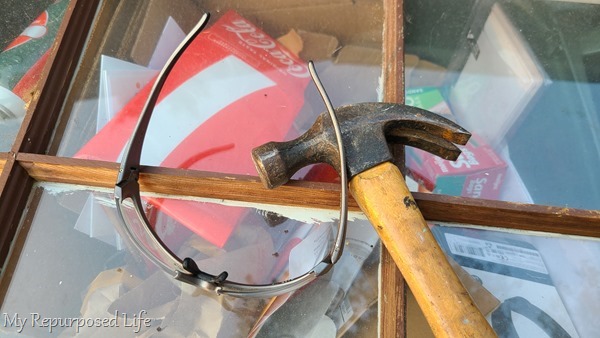 Because my recycling can accepts glass, I chose to break the glass right into the trash can. My tools? Safety glasses, a hammer and . . . 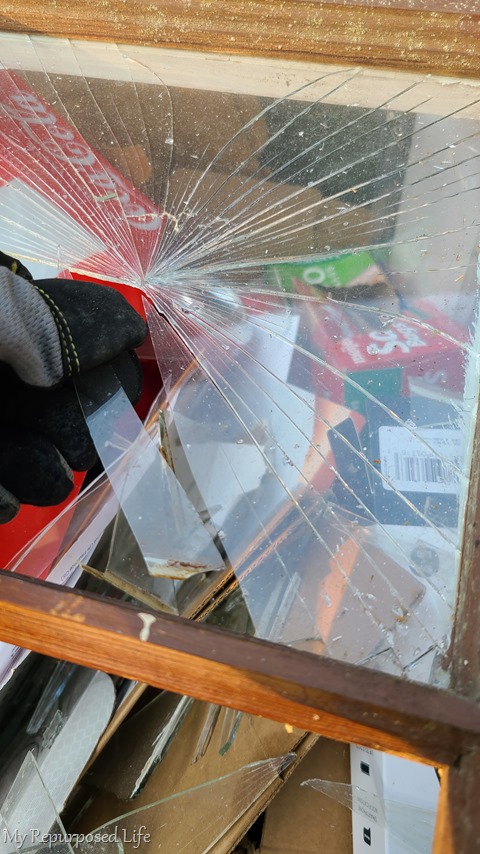 . . . gloves! It may seem counter-productive, but it’s best if you make one smash of the window, leaving larger pieces of broken glass. Carefully remove the glass with gloved hands.

Maybe you have a window in your stash with a few panes already missing? 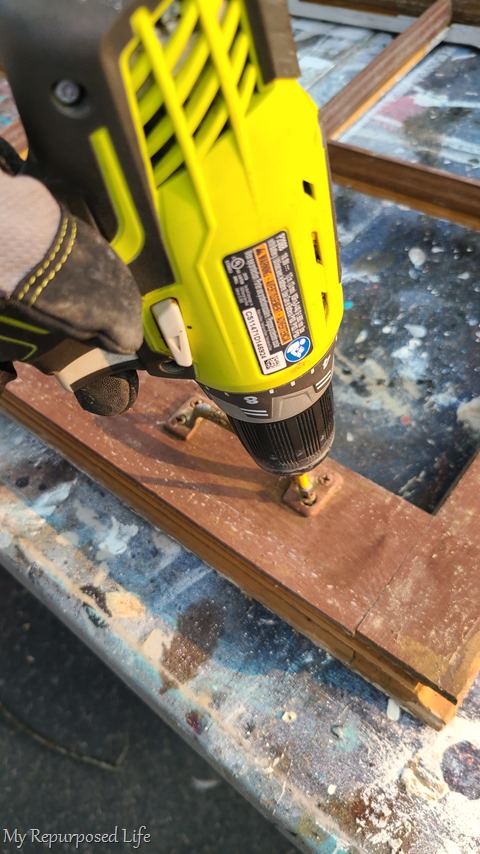 Using my power drill I removed the two handles and the latch from the window.

What is a Muntin? 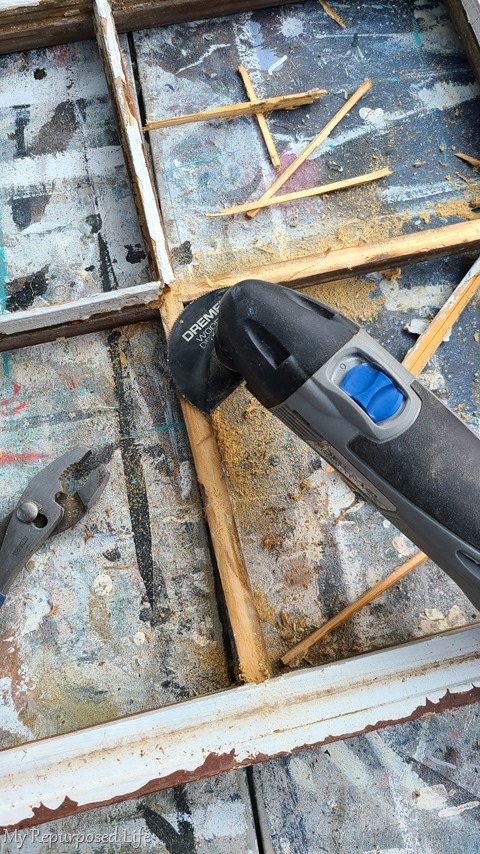 The muntins that hold the window panes in place had extra wood that I wanted to remove so that my cubby boards would rest flush. I used a Dremel Multi-Max to remove the portions where the windows were originally glazed. After removing the extra wood, I used an orbital sander to make the pieces smoother in order to accept the new lumber. 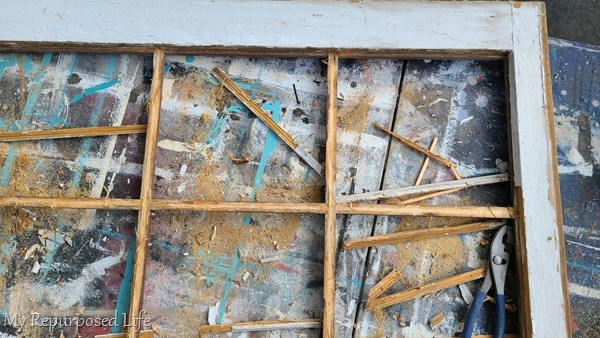 What a mess! You can see why I needed to do some sanding, right? 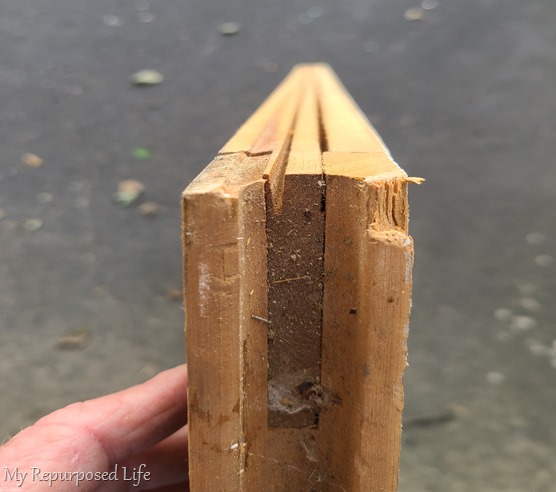 In order to make the shadow box hook shelf, this part of the window sash needs to be removed. It originally slid up and down the jambs. 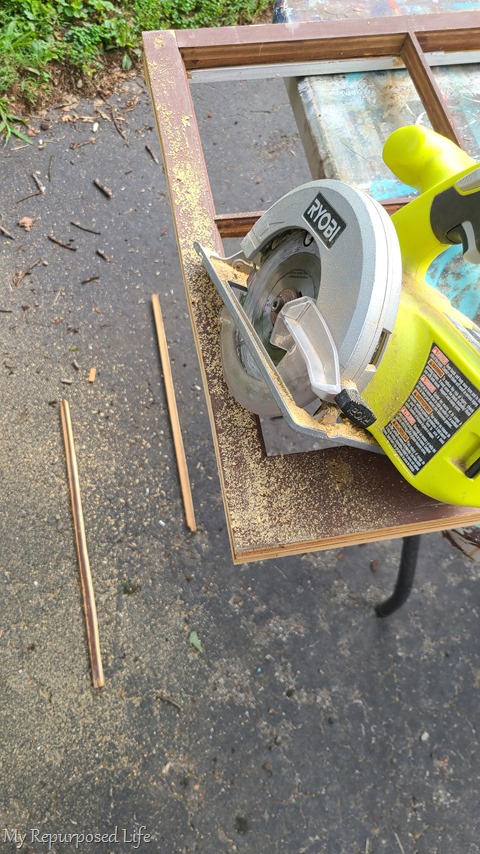 I marked the sash with a pencil and used my handy circular saw to trim it. This little guy runs off a battery and never lets me down. Corded circular saws with larger blades make me nervous! 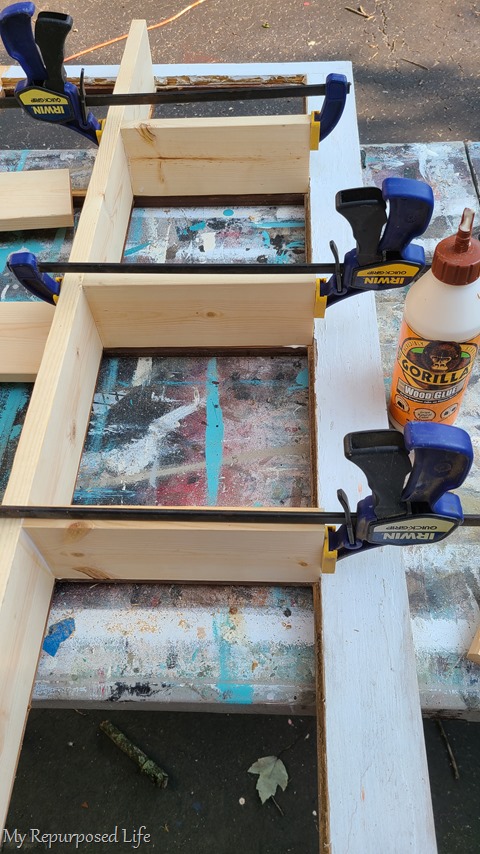 I used 1x4’s for my cubby boards. First, I cut the cross board, then I cut the shorter boards that would be vertical. Using Gorilla Wood Glue and Irwin Quick Clamps I started assembling the shadow box hook shelf. 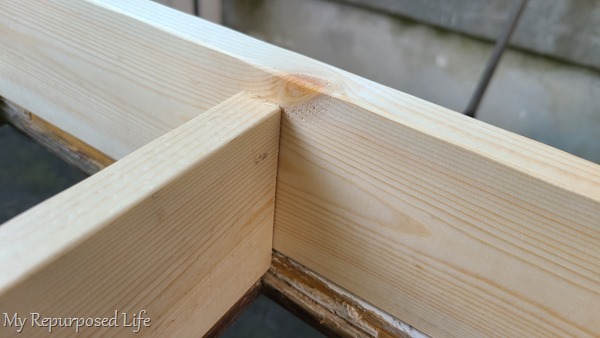 This image shows that the board that will make up the shadow box frame needs to be ripped on the table saw. This is due to the inset of the cubby boards, resting on the muntins. 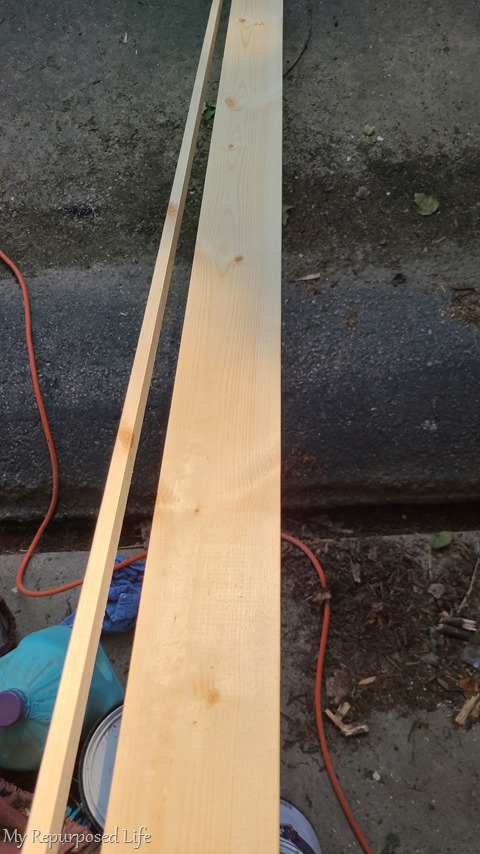 I ripped the full length of the first board. That gave me the top and two sides. I needed a board for the bottom of the shadow box measuring about 40”. I cut it on the miter saw, and only ripped that length so the remainder of the board is the full width for a future project. 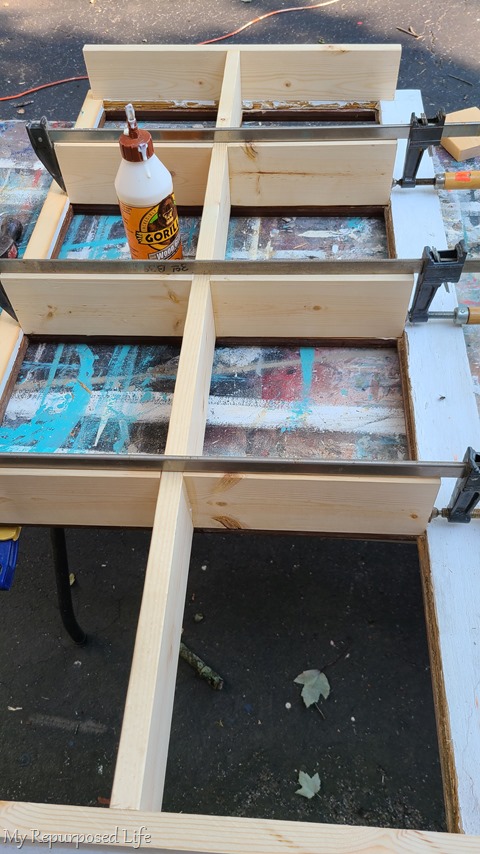 More Gorilla Wood Glue and more clamps! After the glue set up, then I was ready to assemble the frame of the shadow box hook shelf. 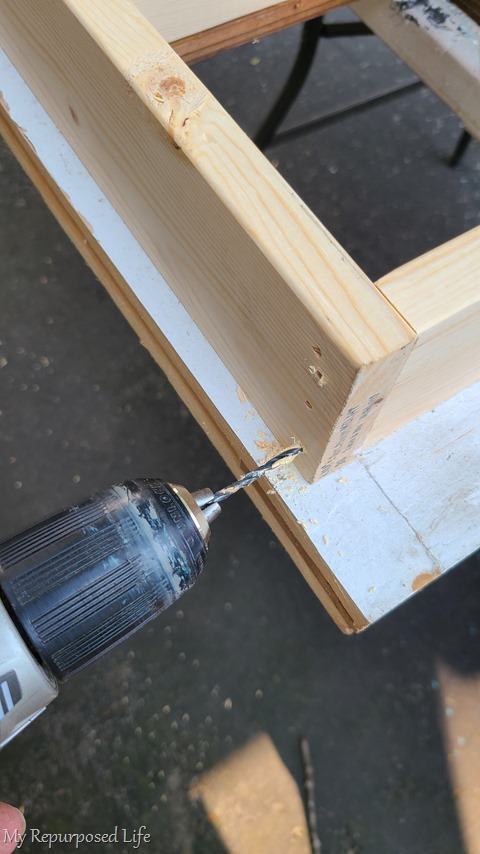 I used my nail gun wherever possible to “tack” my joints in place. Then, I drilled pilot holes and secured the frame with fine thread drywall screws. The wood is soft, so it was easy to countersink them. 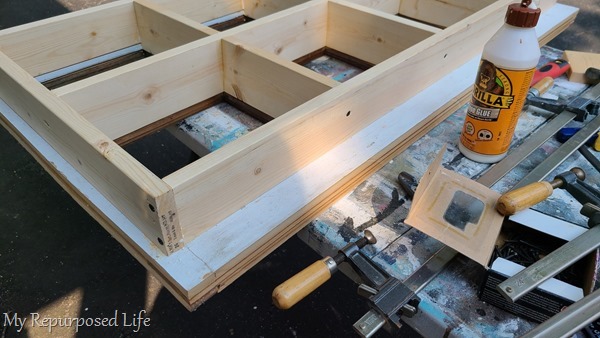 I worked my way around securing all the cubby boards to the frame with more screws. There was no need to drill pilot holes for those. 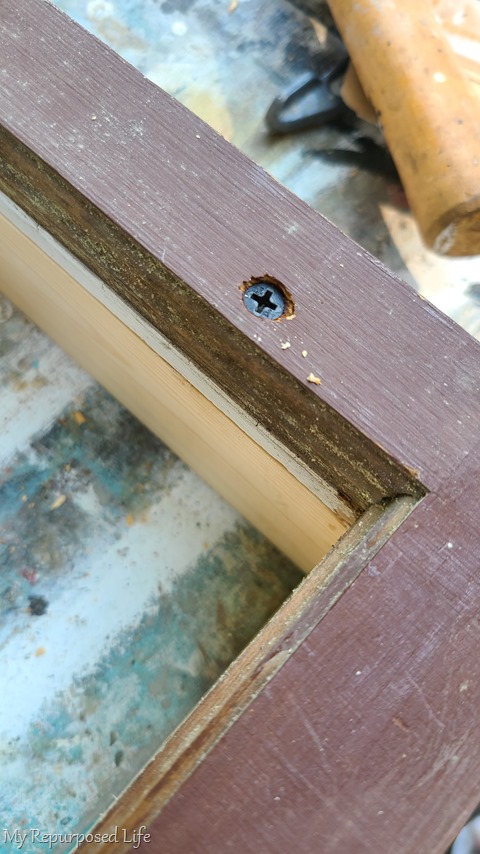 After carefully flipping the entire project over, I secured the window to the shadow box with a few screws all around the window. Again, countersinking the screws so they won’t be visible on the finished project. 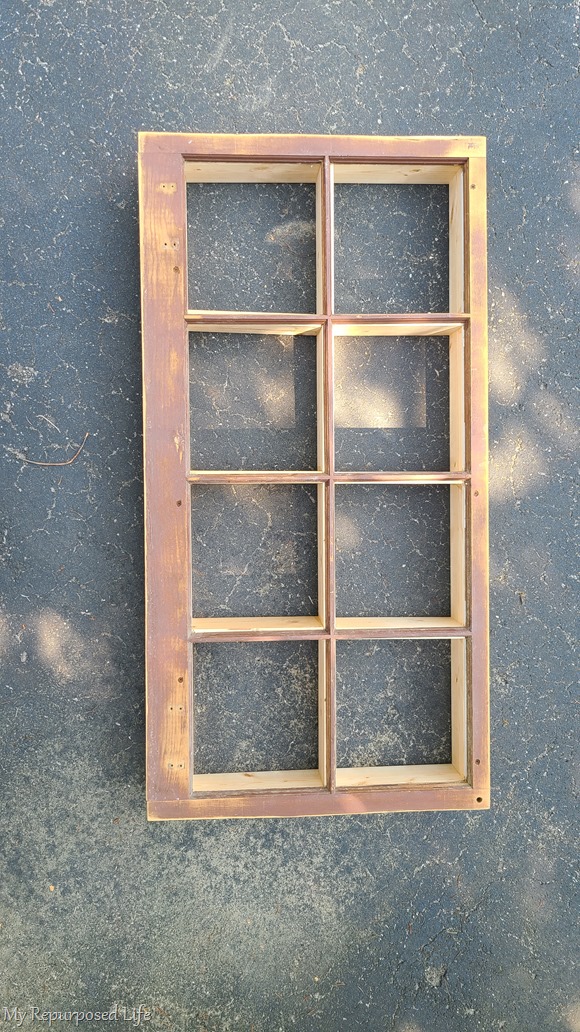 I call this a rough draft of the shadow box hook shelf BECAUSE one of the cubby boards is way too wonky. Do you see it on the top left? I ended up removing the screw and straightening up the board the best I could. 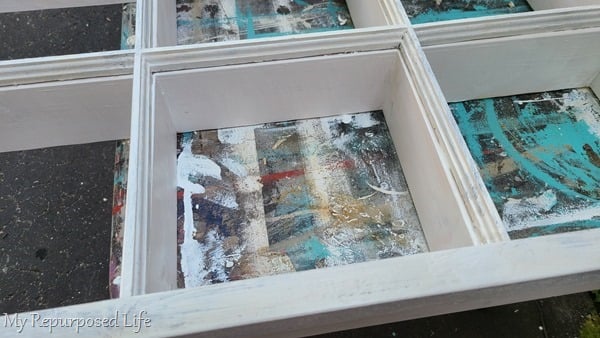 I use drywall mud for patching holes on small projects like this. It’s cheaper than wood putty, especially if you buy it in the drywall department NOT the paint department.

I mixed up diy chalky paint primer and applied a couple of coats. 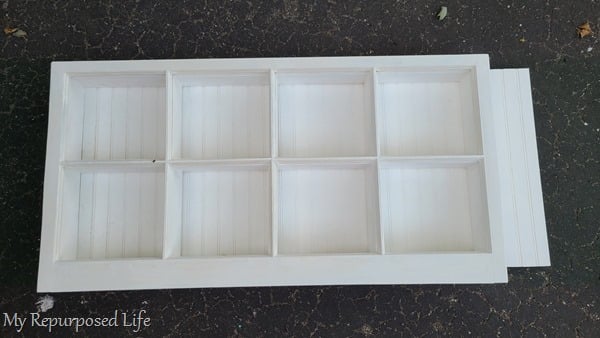 After the primer dried, I was anxious to see how the shadow box hook shelf was going to look using this scrap piece of bead board I got from my neighbor Rodney after he remodeled their bathroom. Looking good, eh?

Heirloom Tradition All In One Paint 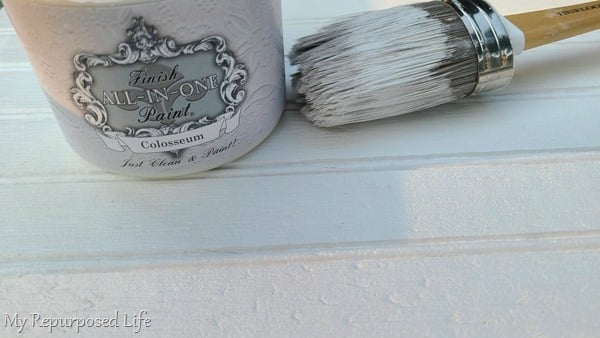 For the top coat, I used Heirloom Traditions All In One Paint, in Colosseum. Since the bead board had already been painted, it was easy to change the color.

I didn’t have any black hooks, so I chose to spray paint these single coat hooks for the shadow box hook shelf. 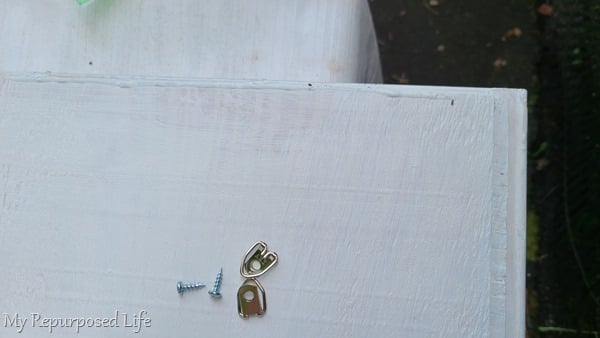 I used my nail gun to attach the bead board to the back of the shadow box. I prefer to use these d rings for my hanging projects. Because I wanted a good hold, I chose to screw the d rings into the 1x4 frame instead of into the bead board. 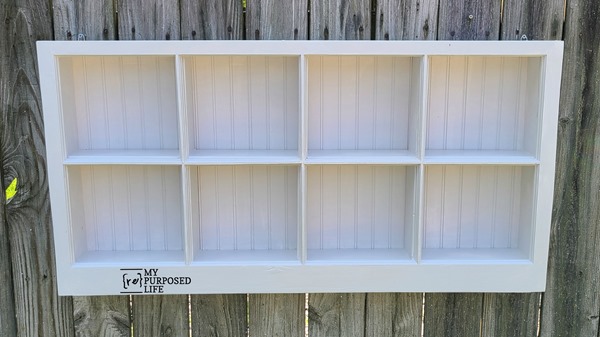 Of course, I couldn’t wait to see how it would look hanging up. This thing is huge, and very heavy after I added the bead board backing. Don’t you love the way the muntins frame out each cubby?

How To Add Coat Hooks

You may think adding coat hooks to a project is a no-brainer. But I’ve had many issues over the years with broken screws, that now I have it down to these 5 easy steps. 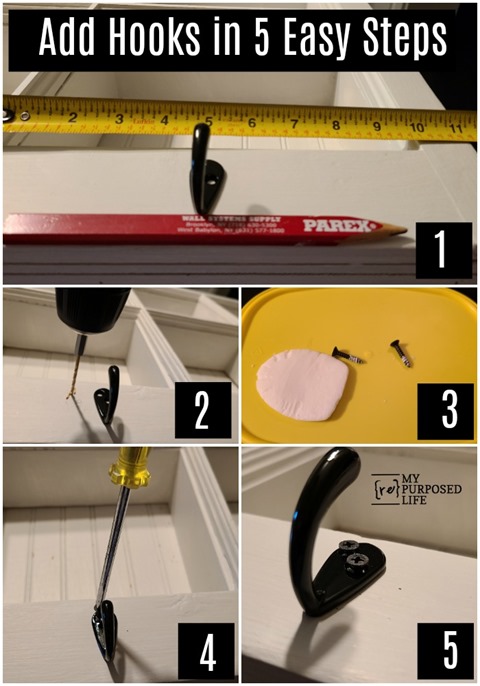 1) Place hooks on project. Self Centering Tape Measure aids in getting hook centered. Using an item below hook insures that all hooks match.

3) Use bar soap on lower threads only of screws.

4) Do NOT use a drill for this step. Secure screws with a hand held screw driver.

5) Drive screws in equally at the same time. Start #1, start #2, then work back and forth from one to the other. This is your last chance to make sure the hook is straight. Do NOT overtighten screws. 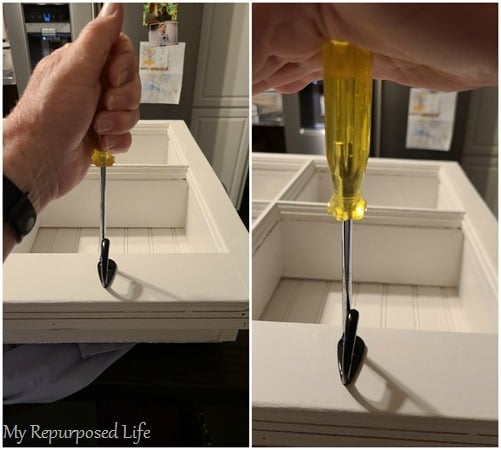 One last tip—I don’t want to insult your intelligence, but you may not be using a screwdriver in the easiest way for these kinds of projects. To turn a hand screwdriver into a ratcheting screwdriver, use one hand to pivot the screwdriver while holding the other palm firmly on top of the screwdriver. I was unable to take a picture of the process since it takes two hands to do this, and another to take a picture! Let me know in a comment below  if you already knew this or if it’s something of an a-ha moment for you. I hope the explanation makes sense. 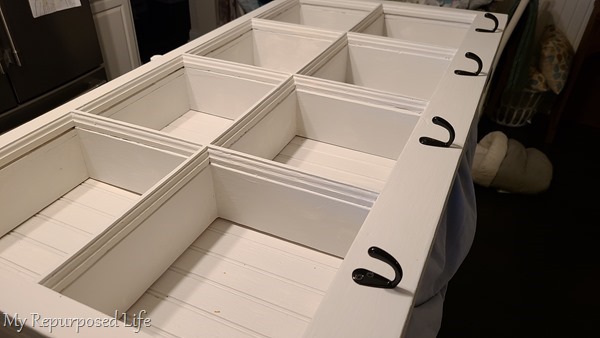 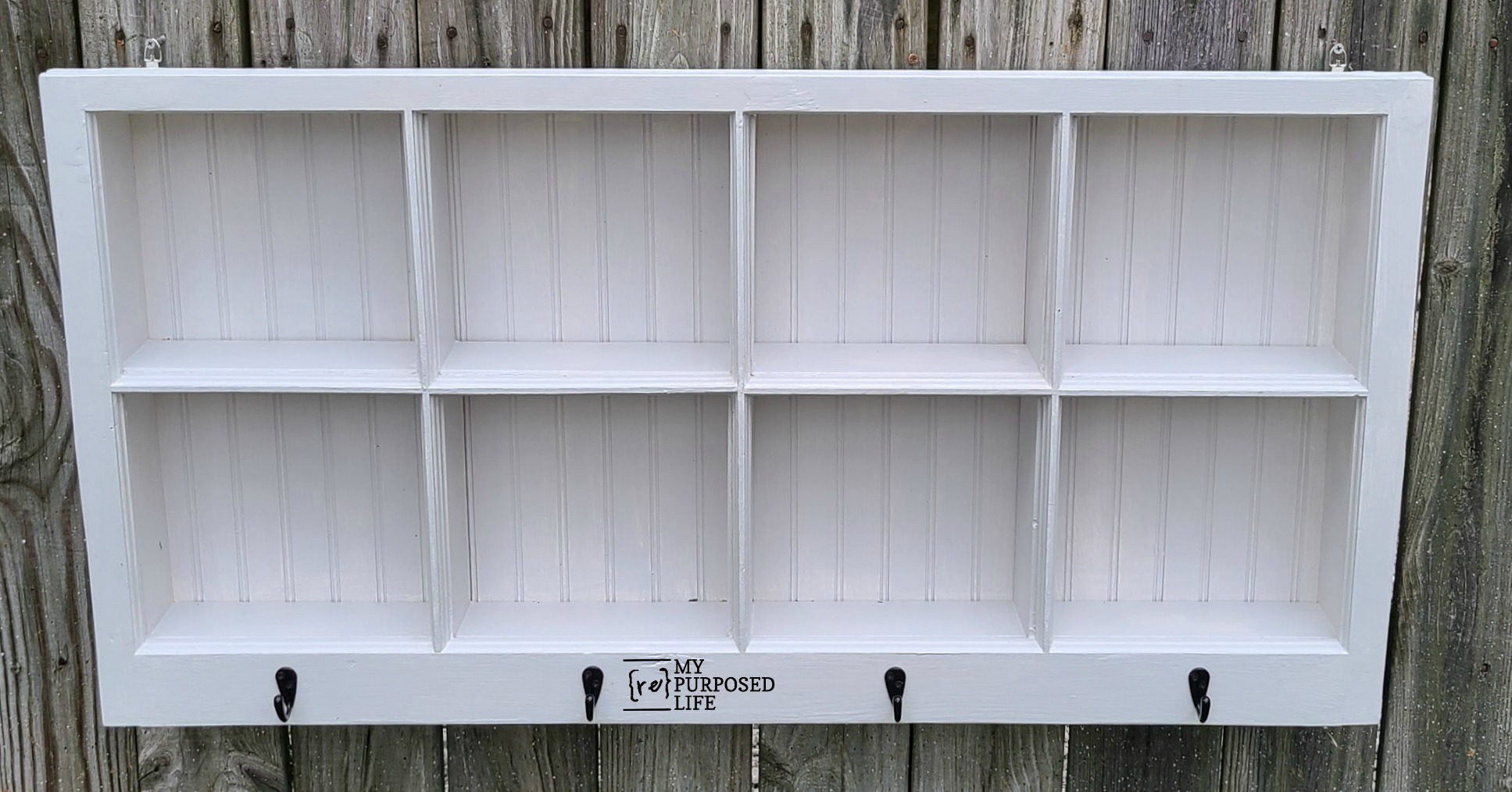 Can you believe this shadow box hook shelf was that nasty old window? Isn't it so pretty now!! 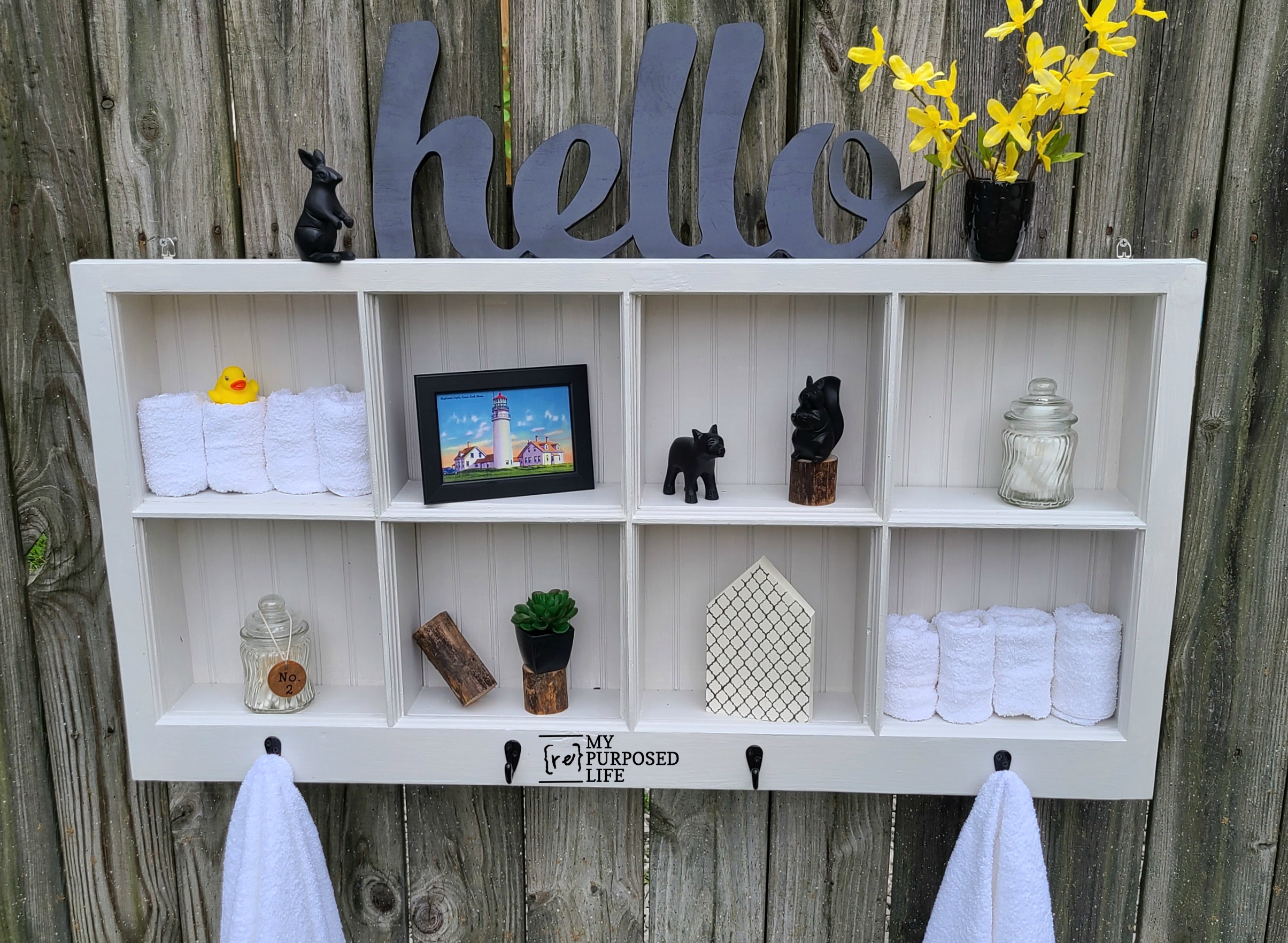 Of course, you wouldn't use it on an old fence, but this shadow box is so large, I didn't have a place to stage it. I can see it in a guest room, a bathroom, or hanging above a coffee station filled with cups, mugs, etc!

Could you save and share this repurposed window project on Pinterest for me? I'm always so grateful for any social shares that inspire others to repurposed reclaimed junk! 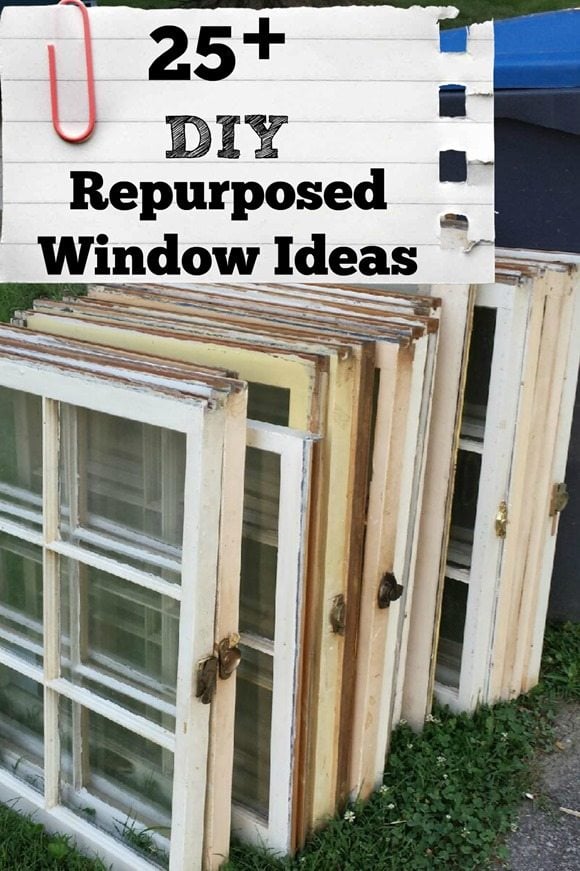