Did you know that my yearly craft show in Glendale KY was this past weekend? I’ve been working like a crazy woman trying to get projects done, but with Summer hanging on so long it was difficult. 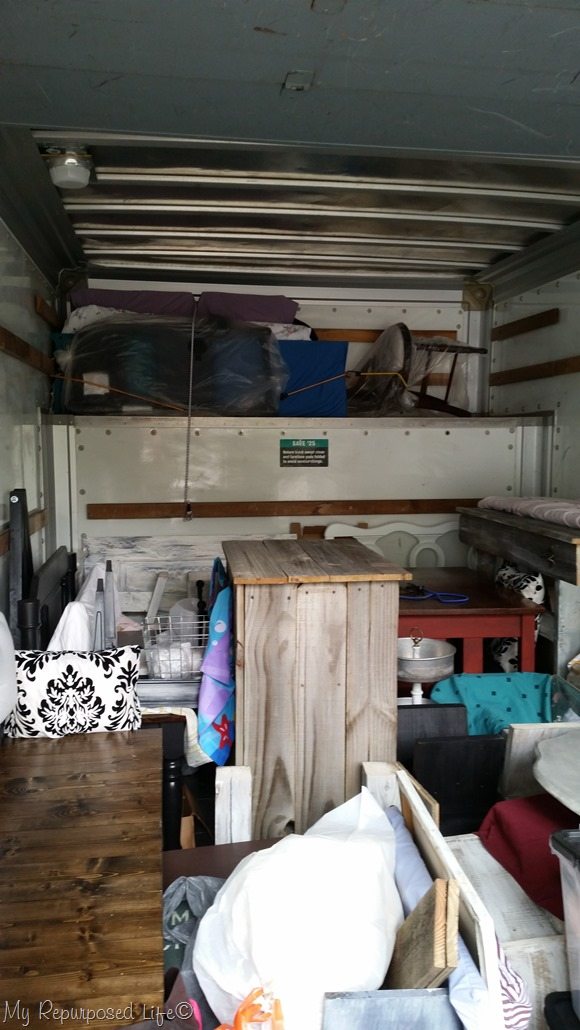 I rented a u-haul again this year, but a larger one than I did for Glendale 2015.  This one was taller and longer. A couple of times I asked cousin Terry to back it up and park it—but after the show was over I backed it up at home with no trouble. 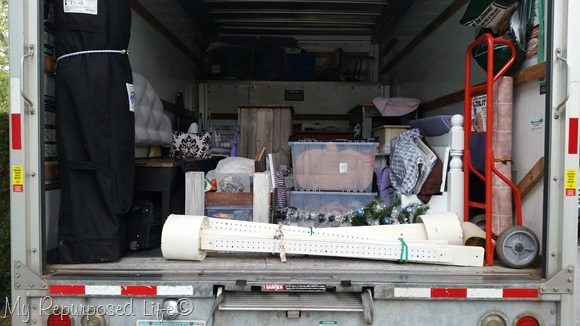 It was mostly full,  we could have gotten a few more things in—but I was happy with the amount of stuff I took. Terry is an extremely good packer. Last year it took me 5 hours (with help) to load the small u-haul. Terry and I got this done in about 2.5 hours.

We headed to Glendale on Friday to set up the booth. We got there in the late afternoon, so I don’t have any pictures of us setting up. It was really busy and we worked till it was almost dark. 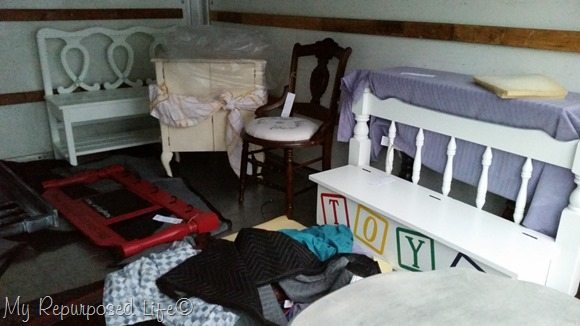 These are the items that were left on the truck sort of using it as a “stock room”—replenishing projects in the booth as others sold on Saturday morning. At least that was the plan. However, some of the items that I held for people were left for hours, and that delayed us in getting more stuff off the truck. In fact, looking at this picture, it could easily have been the picture of the truck at the end of the day because none of these items sold.

Here, I thought using the truck as a stockroom was a good idea, and I think it would have been if these items had made it off the truck at 10:00 am instead of 2-3 pm. The hope next year is to rent a third booth. 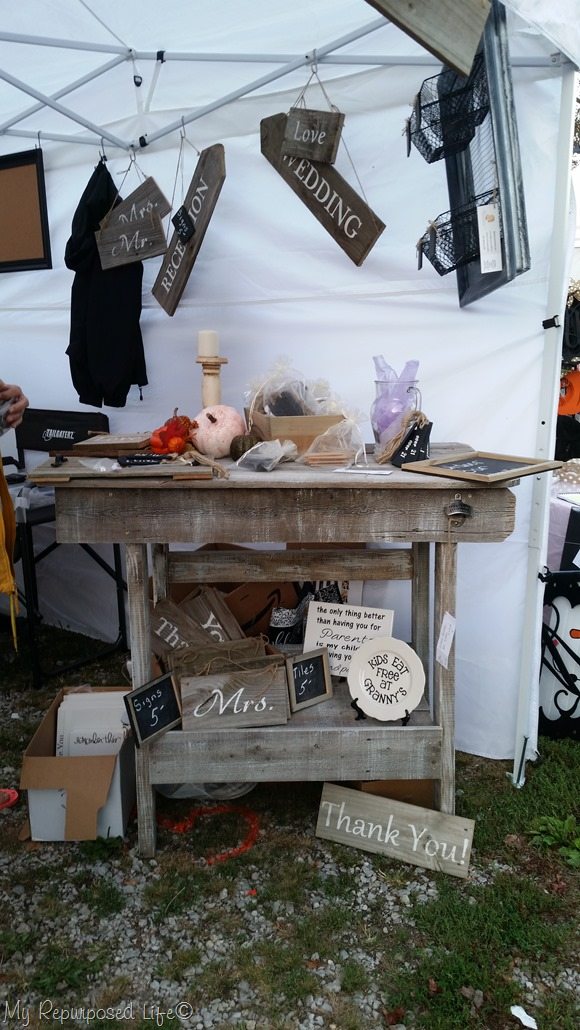 This outdoor bar and the wire basket organizer (top right) were a couple of the first items purchased. However, the bar is one item that was held. The older stock (wedding signs and tiles) were on sale for $5. We sold a lot of them. The beverage tags were also $5 a set and I think only one set was sold. I was inspired by The Kim Six Fix to crackle some $$ Tree pumpkins to bring a little bit of Fall into my booth. 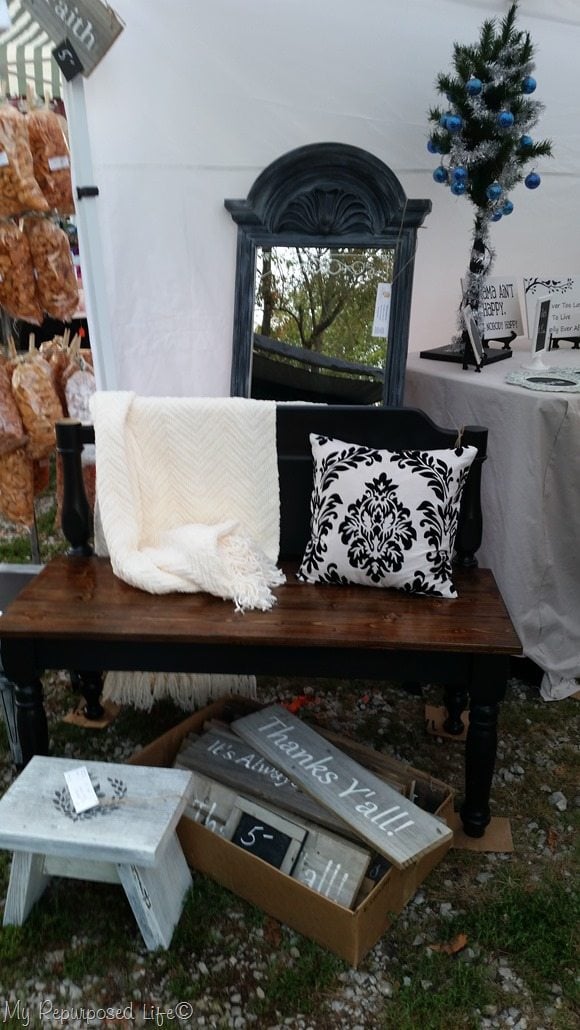 I took several of the one board stools, left over Etsy signs, and several new headboard benches like this two toned black and dark walnut bench. The dresser mirror is just a run of the mill plastic piece that looks so much better after it’s painted. You will notice that all of my furniture pieces that are sitting on the gravel are wearing what I fondly refer to as “furniture shoes” to keep their legs from getting nicked by the rocks. 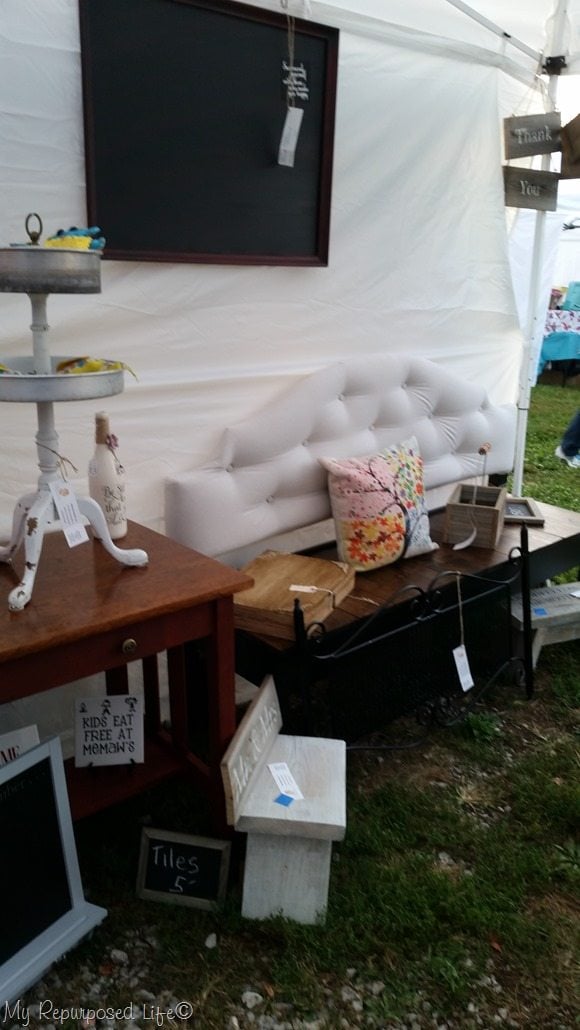 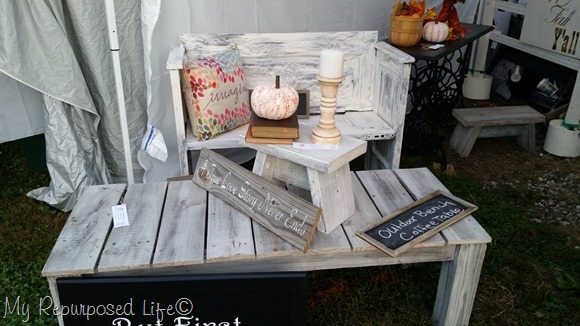 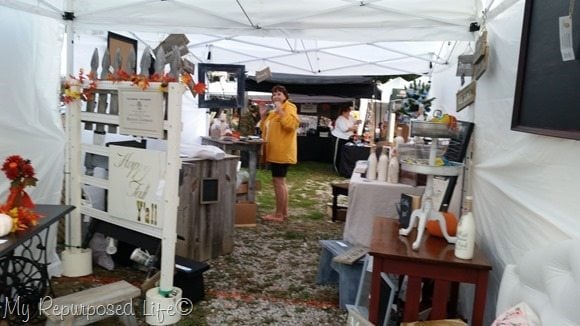 Here’s another view looking through the booth. That’s Terry working oh so hard! On the red library table, you can see the easy image transfer wine bottles from last year. We used the craft show cash out station again, and it was very helpful. 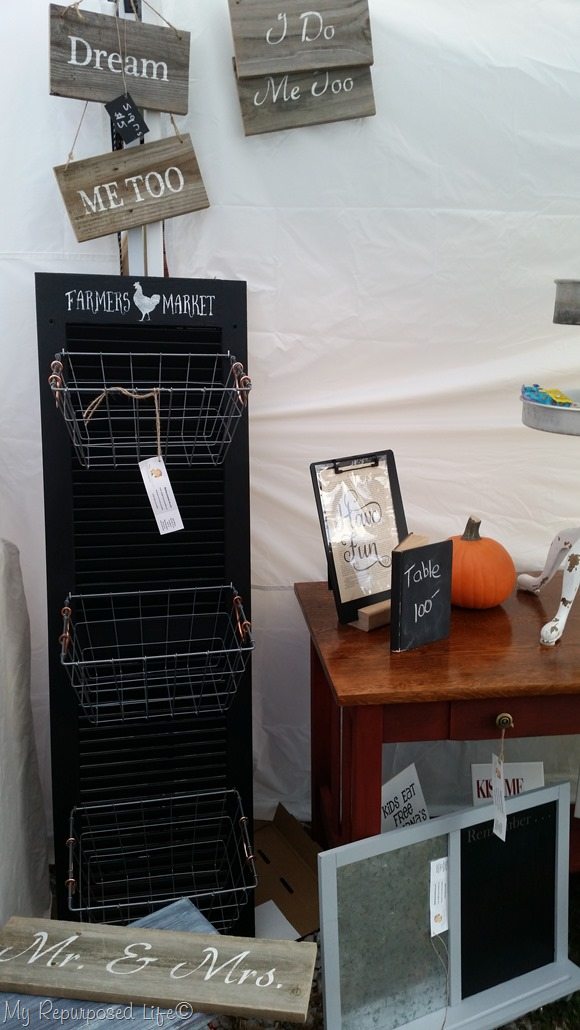 The Farmer’s Market vegetable bin made from a repurposed shutter went home with the small twin two-toned black bench. 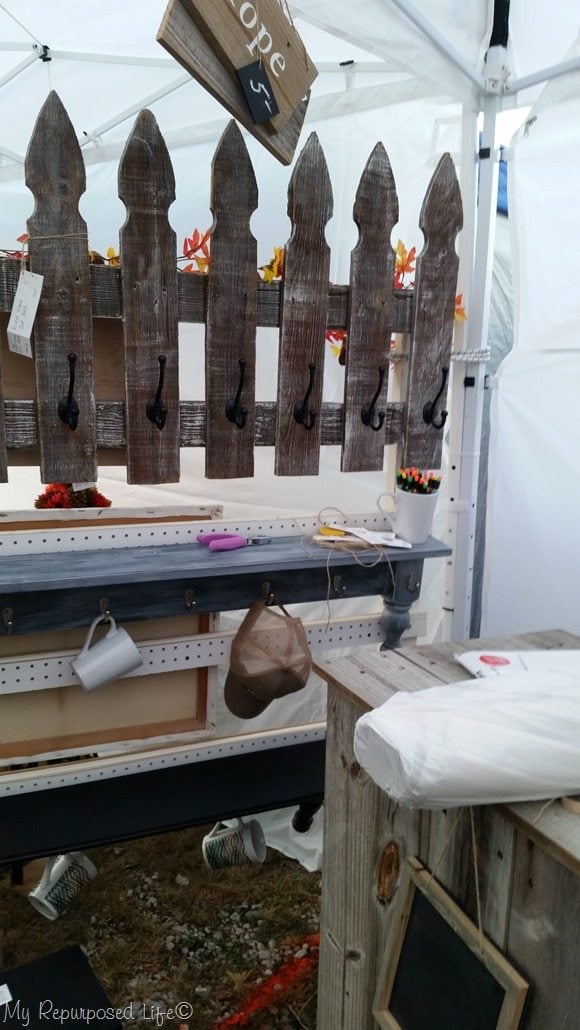 This picket fence coat rack sold very early, but we held it and could have sold it all day long! The two shelves below it also sold. 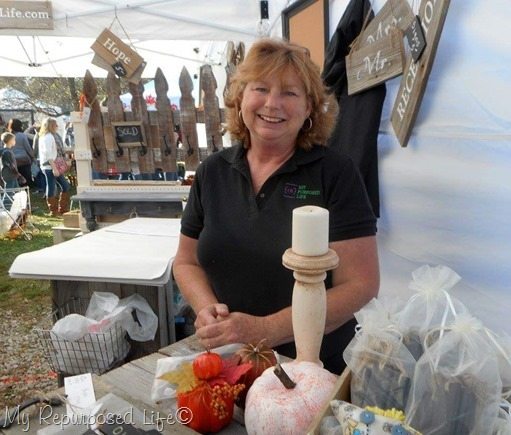 A local reader, Nova stopped by for a visit and took this picture of me. 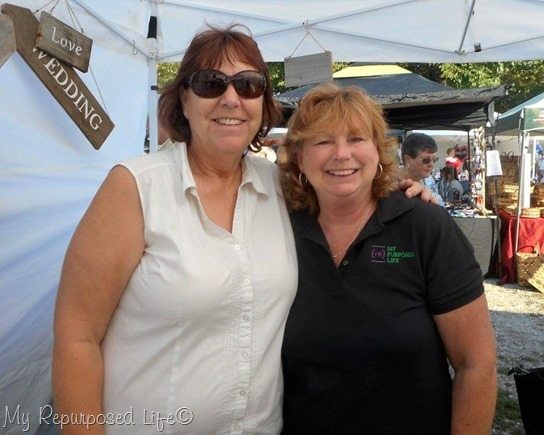 Nova also snapped this picture of me and Terry during the warm afternoon—I’m a hot mess! 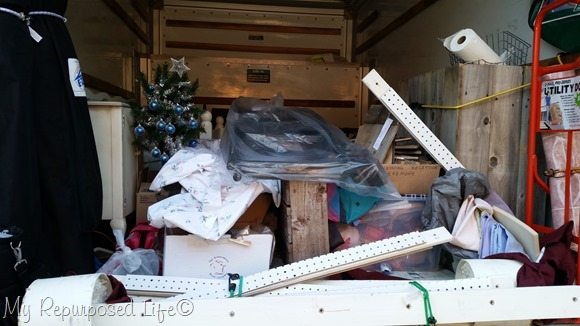 This is the u-haul loaded to come home. It was late, we were tired, and I was very HOT. Near the end, I just wanted to get the stuff in the truck. It was a beautiful day, and it got very warm. I’m not sure it was a record crowd, but I think every vendor from near and far showed up because of the beautiful day predicted. 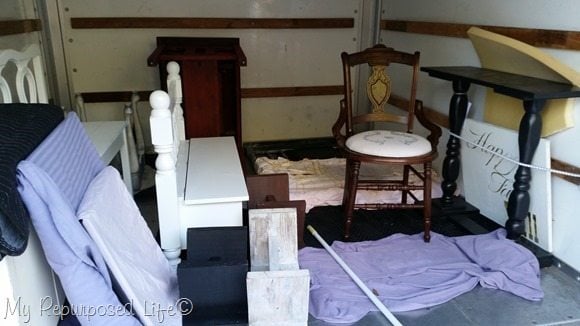 These are the items left in the truck after I removed all of the display stuff such as tents etc. Terry met me at Vendors’ Village the next morning to help me get all of these new projects into my booth. With the exception of the library table (on end) all of this stuff was “second act” stock. How did we choose what stayed on the truck Friday night? We chose smaller, lighter pieces that would be easier to haul to the booth by one person. Not seen is the vintage sewing cabinet. 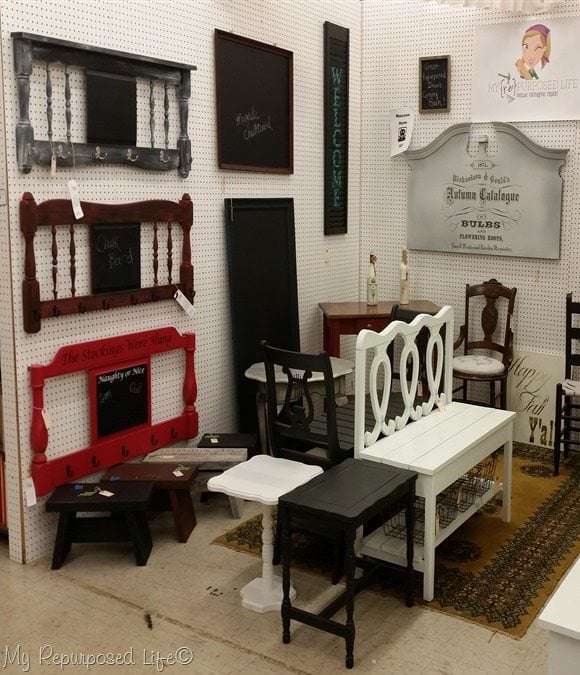 Here is how the booth looked that next day after we loaded it up again. 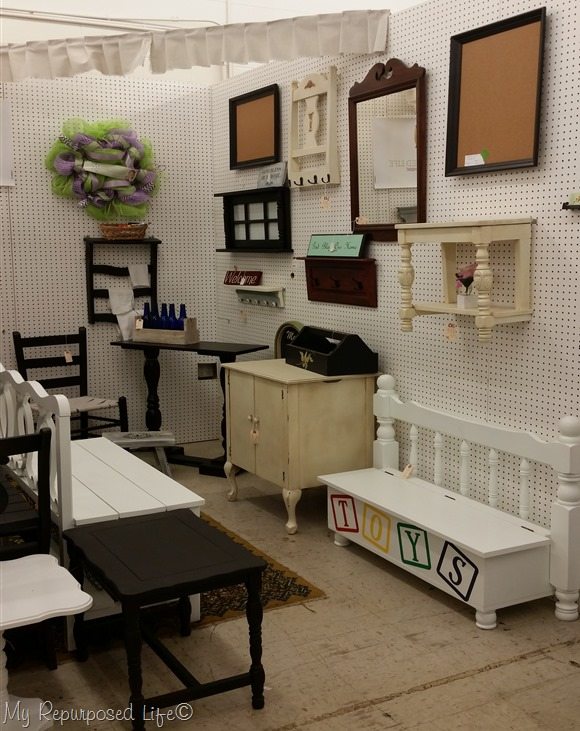 A good mix of new and old projects, all moved around ready to go home with a new family. Coming soon—tutorials on the white twin headboard bench, the  toy box bench and the double pedestal table in the corner.

Stop by tomorrow for a fun shelf tutorial. Nothing gets thrown away around MY shop!