I'm going to show you step by step how to make a craft station that doubles as a kitchen island out of an old cabinet. 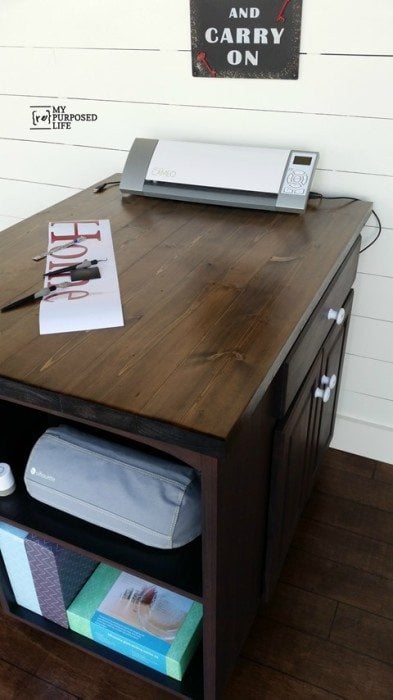 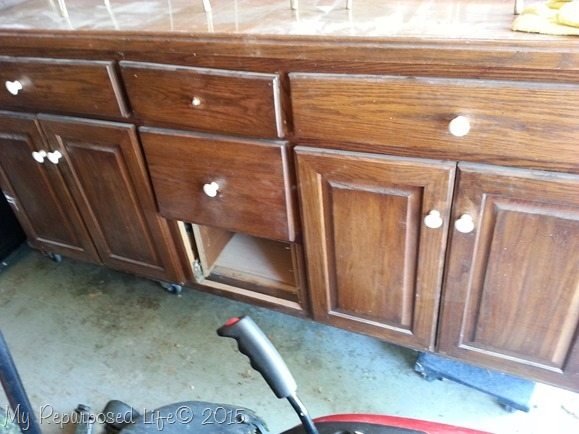 Once upon a time I got this huge base cabinet. Not only was it taking up a LOT of room, it was resting on three of my furniture dollies.

See that humongous top? I used it on my diy portable fold-up pallet bar! 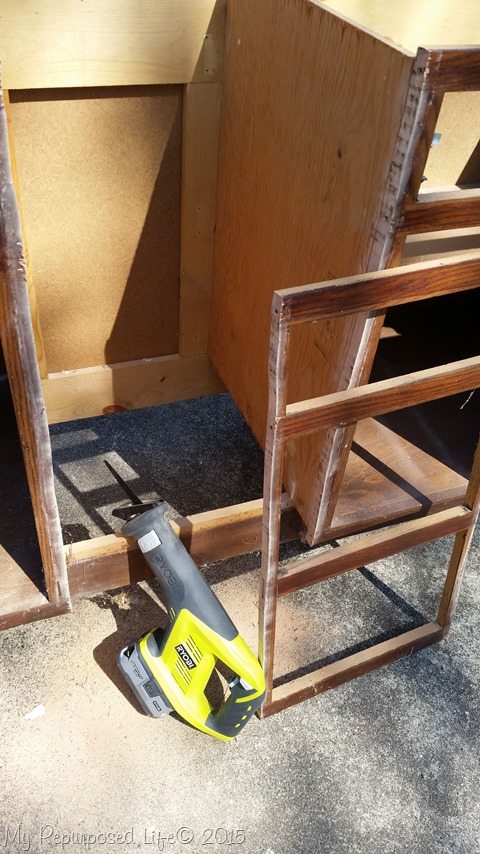 I grabbed my saws and started cutting it apart. 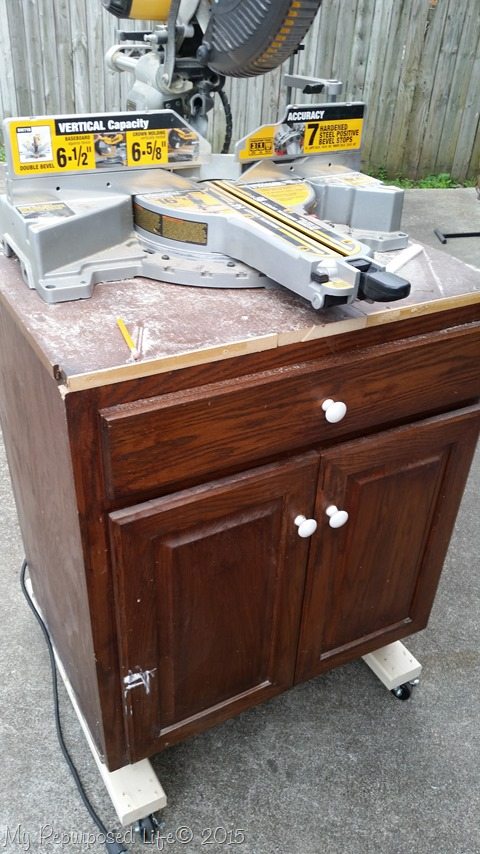 . Don't you agree  that the other part of the base cabinet wanted to be a craft table? 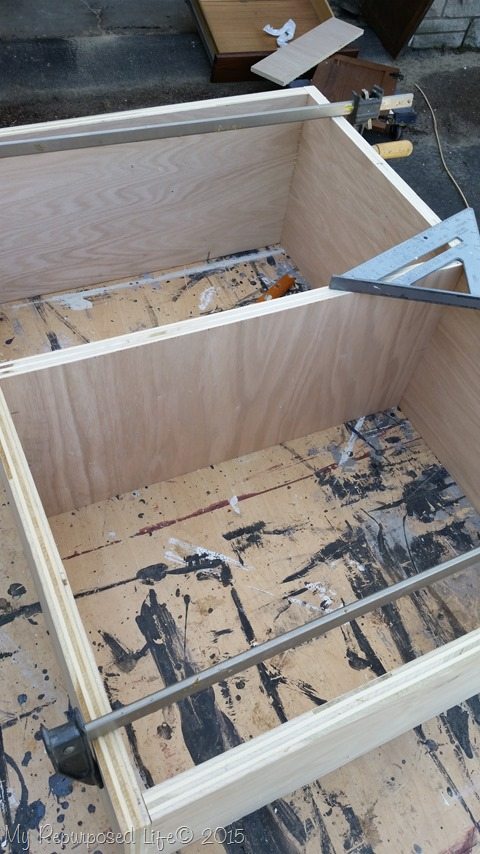 To make the craft station a little more substantial, I built a shelf to attach to one end of the cabinet. I used ¾” birch plywood left over from making a top for Jamie’s coffee table. (I loved when SewWoodsy beefed up their island this way) 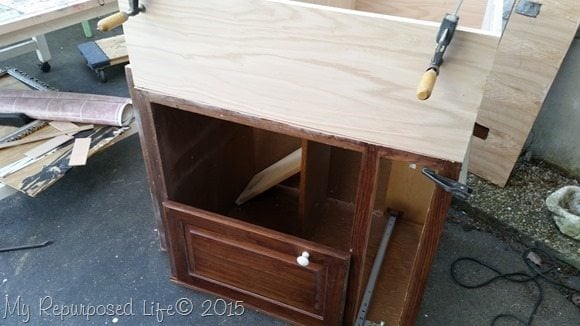 The bookshelf was put together with Kreg K4

pocket holes, then attached it to the cabinet using pocket hole screws. 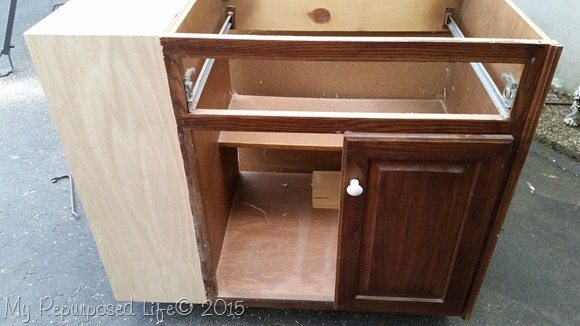 To make things easier, I removed the one door  temporarily.

Add a bead board facade to the craft station 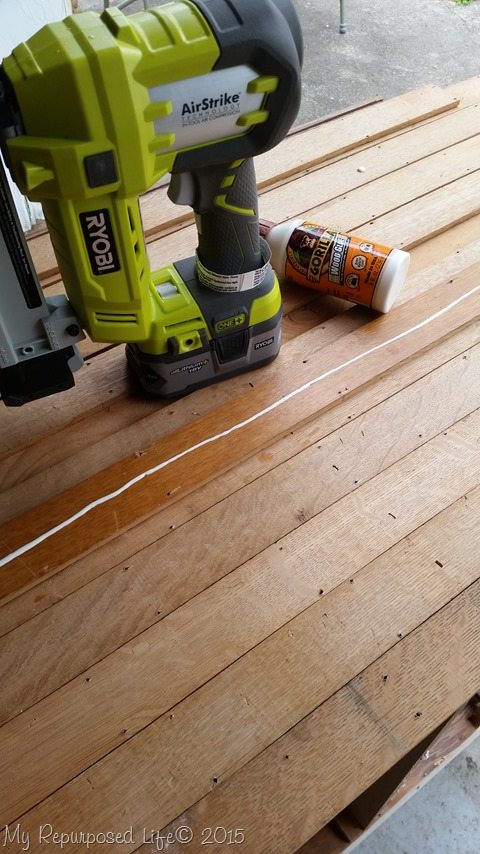 I thought the craft station project would look good with bead board, but I didn’t have any and wasn’t keen on buying anything for this project. So, I used the oak plank flooring I got last Spring from a good friend. I used the same method on my IKEA Tarva Hack. 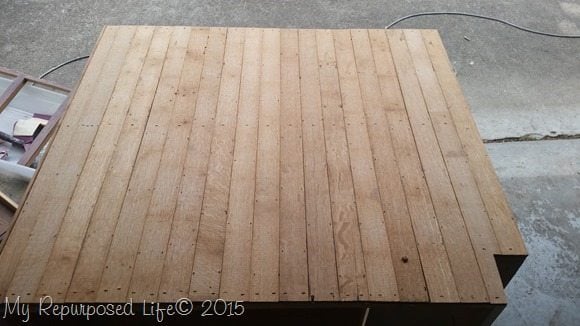 and Gorilla Wood Glue to make quick work of adding this faux bead board made from oak plank flooring. 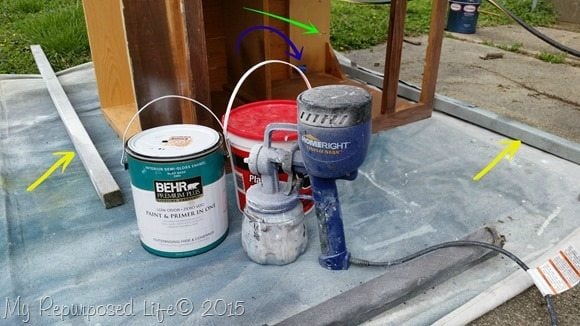 It was time for some paint. This is my favorite part where all my mismatched pieces gain some cohesiveness. I used my chalky paint primer recipe mixed with semi-gloss paint and plaster of paris. The HomeRight Finish Max

made it easy to get inside all the nooks and crannies. The cabinet is laid on it’s side because I always paint the underneath of my pieces.

The picture above has a lot going on. The yellow arrows  above show how I use 2x2’s when I paint. I rest my pieces on 2x2’s to keep them up off the drop cloth as well as using them to hold the drop cloth down to keep the wind from blowing it up on the painted piece. The blue arrow shows you that I have painter’s tape on the drawer glide anchor piece. (I removed the glide so I could add the pocket holes indicated with the green arrow. I didn’t replace the glides until after I painted the cabinet. 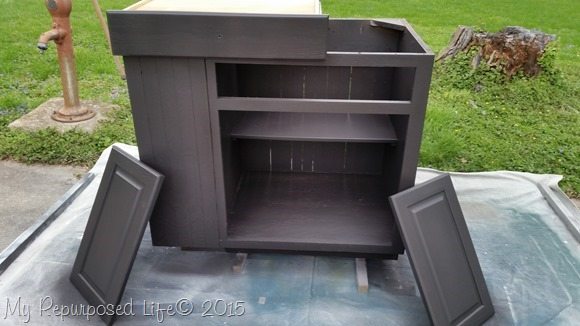 see? Now it all matches and looks so much better!

Add trim to give craft station a finished look

After looking at the bookshelf storage unit on the end, I thought it would look better with a little piece of trim to give it a more finished look. I drew it out on a piece of paper, traced it on a scrap and cut it with my Jig Saw

. I attached it to the cabinet using pocket holes.

More painting of the craft station 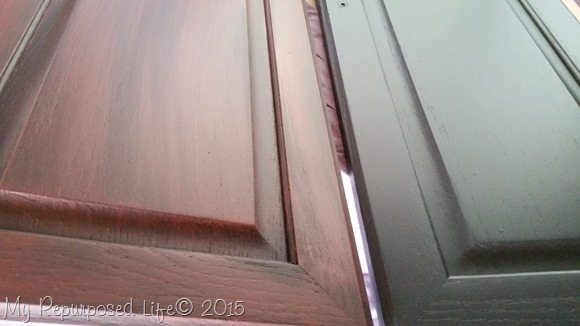 After painting everything with the chalky paint primer, I gave it all a quick coat (with a chip brush)  of Primer Red (ASCP) 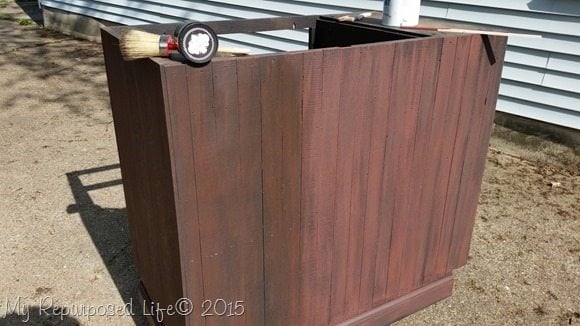 Then, I needed to wax it—so I used  Heirloom Traditions wax in Dark Umber applied with a wax brush.

Applying wax to craft station with a buffer 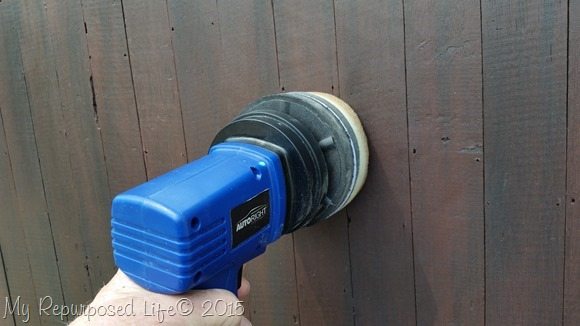 I buffed the craft station with my AutoRight Polisher 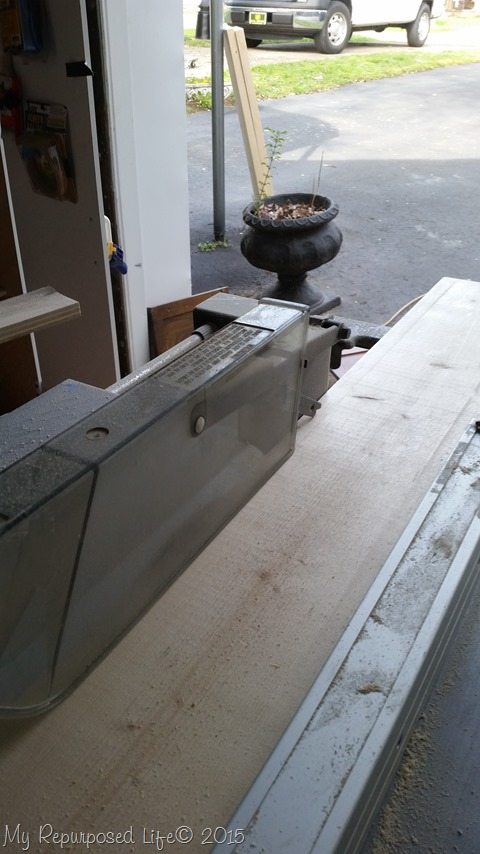 To make a farm table plank wood top for the craft station, I ripped the edges of some 2x6’s. I did this to give them a straight edge instead of that slightly rounded edge they have. I left the rounded edge on the first and last board.

How to Farm Table Plank Top 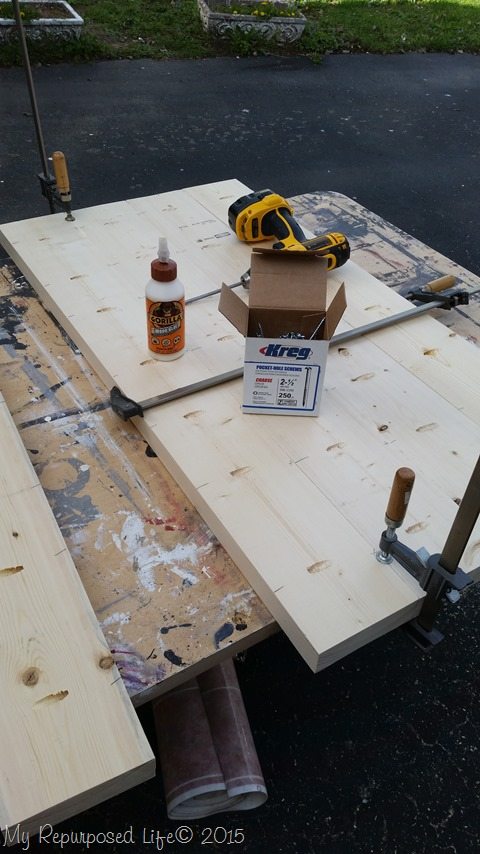 Finally, I drilled the pocket holes with my Kreg Jig, clamping and gluing as I worked my way from one side to the next. Clamps were used to hold the joints together as well as large clamps to get a nice tight fit (front to back) while securing it with Kreg 2 ½" screws 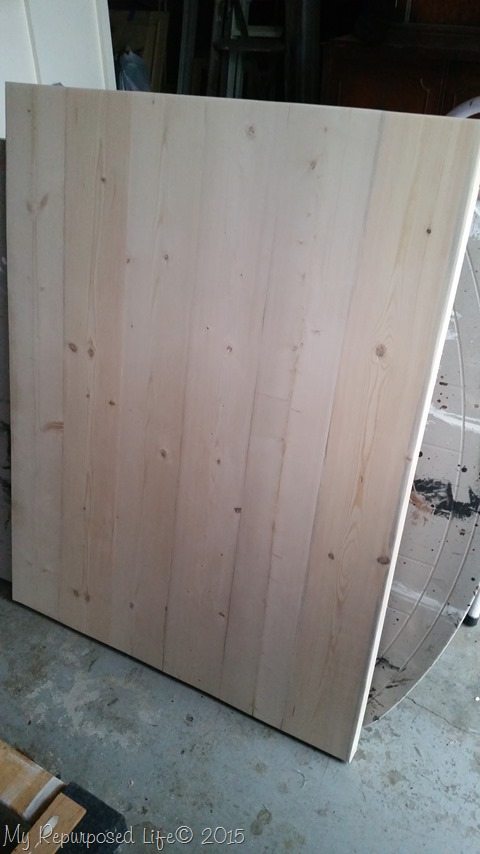 This is after the glue set up, and the first sanding with 80 grit. 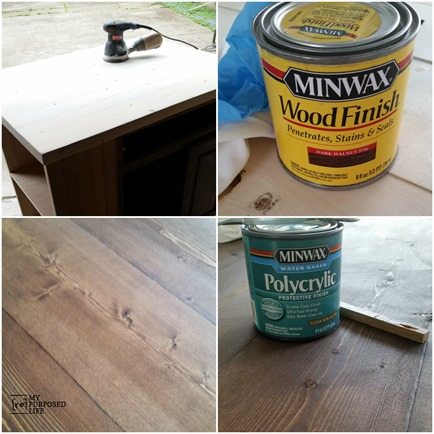 I continued sanding both sides with 150, then 220 grit. A Minwax Dark Walnut stain was applied. Then sealed  with 3 light coats of Minwax polycrylic sanding in between with a piece of brown paper bag. 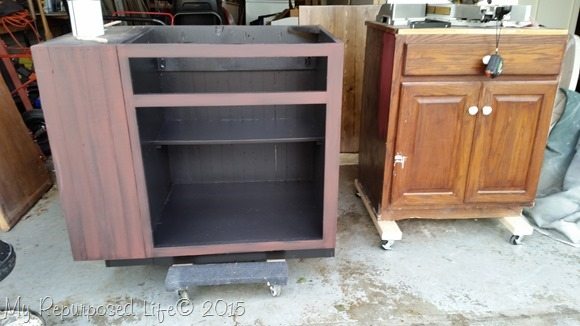 How to attach plank top to craft station 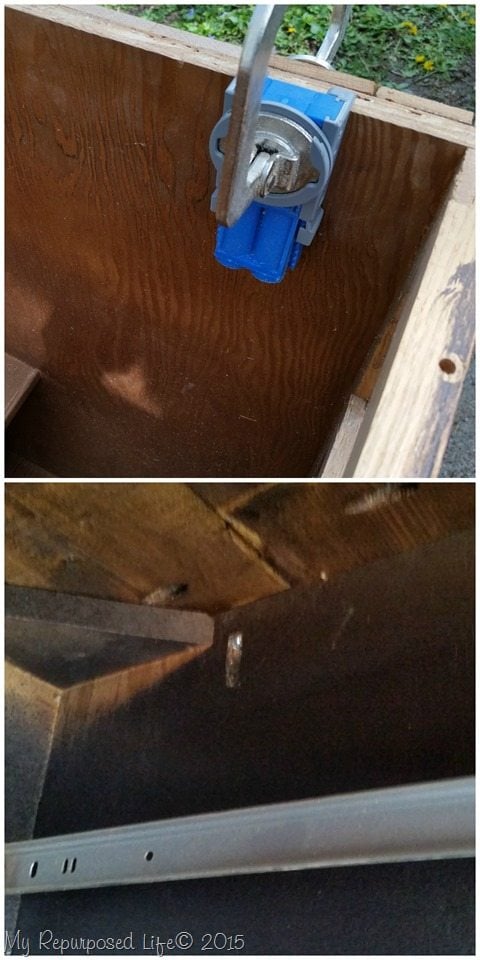 I drilled some more pocket holes around the cabinet to get a secure connection when I attach the top to the cabinet. After attaching the counter top, I replaced the drawer glides.

DIY Craft Station made from a kitchen cabinet 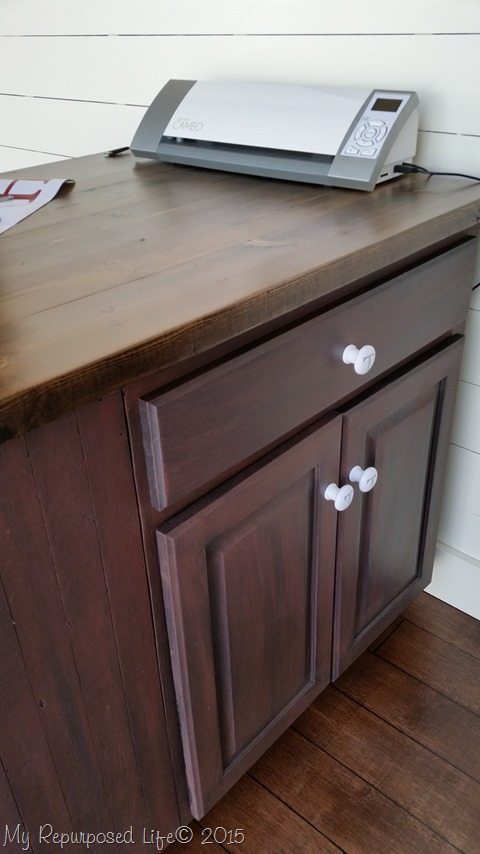 Although I have this set up as a craft station, it would be perfect in  the kitchen as an island. The end I have butted up against the wall, would be great for towel hooks or something similar. 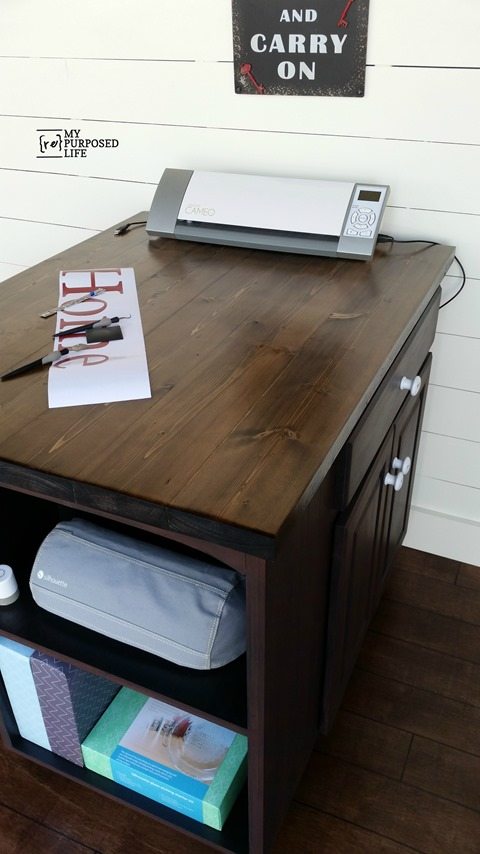 I have made other wood plank counter tops, including one for my kitchen island that doubles as a craft table. I did not trim the 2x6’s and I was left with crumb catchers in the cracks. You can see in this picture that that’s not going to be a problem with this top. 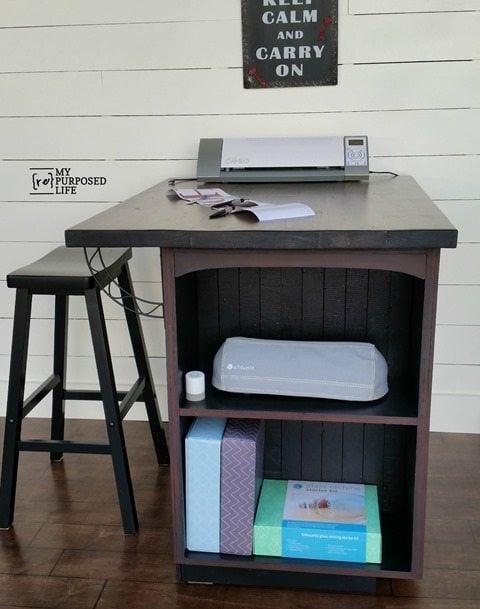 This end shelf would be perfect in a kitchen to hold your KitchenAid mixer and or cookbooks. I added some metal brackets to help support the top that has an overhang to allow extra work space.

Did you notice that I also used the oak floor boards to give the faux bead board look in the back of this shelf? 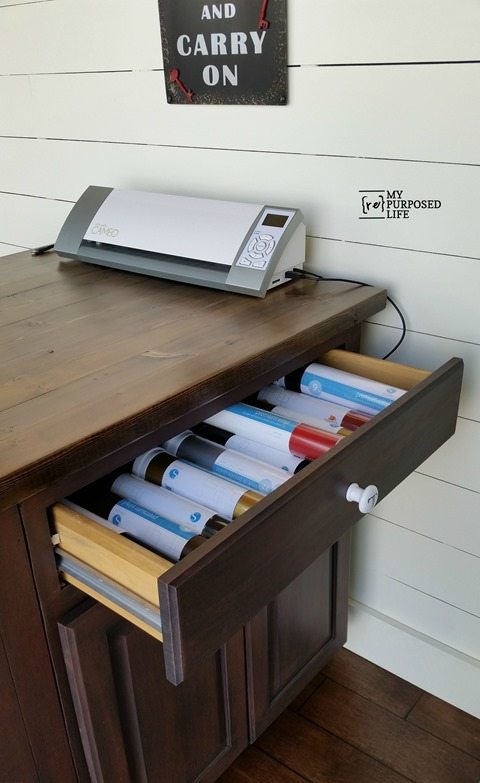 This piece offers tons of storage whether used in the craft room or the kitchen. 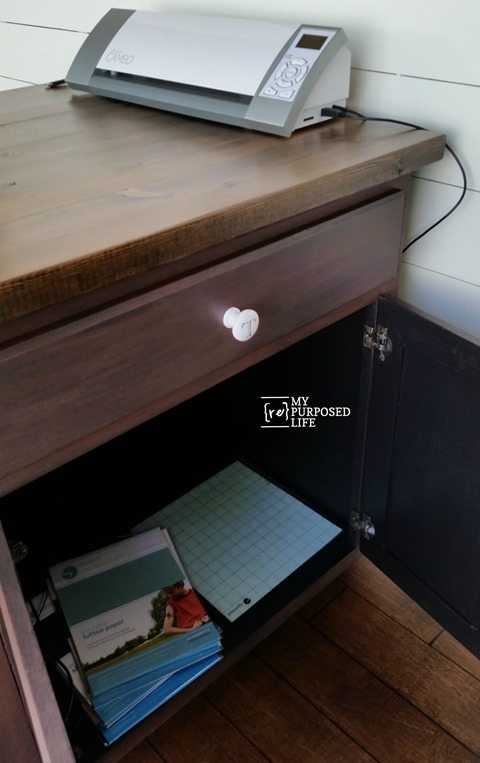 More storage behind the doors. The inside was painted with the chalky primer, then I used the Finish Max to do a semi-gloss topcoat for durability. (I did the same with the shelving unit on the end)

I reused the original hinges, and put on some random knobs I had. 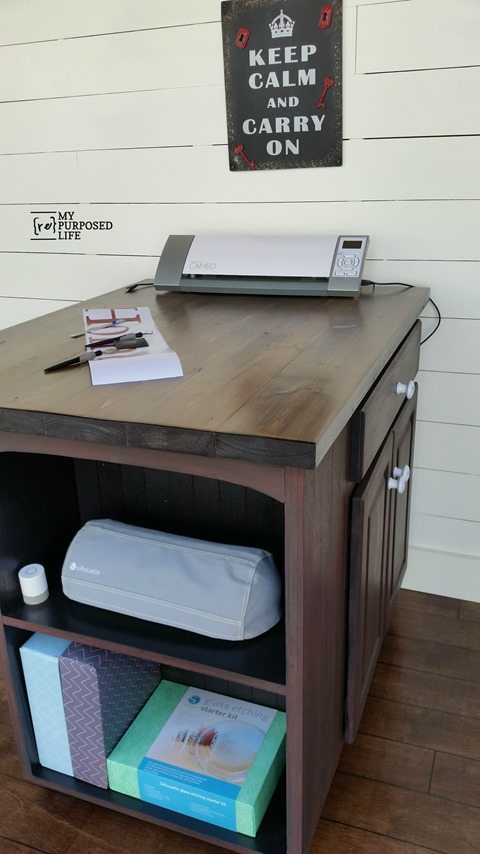 This was a fun piece to make, and I’m so glad that large cabinet isn’t taking up all that room in the garage.

Do you see it as a kitchen island or a craft station?